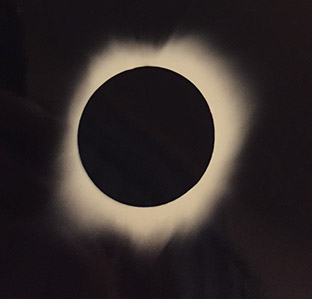 Photo taken by the author in Baja California in 1991.

I’ve chased the moon’s shadow before, and have been blessed enough to witness totality twice—in Mexico in 1991 and off the coast of Curacao in 1998. Halley’s Comet sparked the amateur astronomy bug in me in 1985 and my fascination for eclipses began soon thereafter.

August 2017 and April 2024 have been circled on my calendar for three decades now, waiting for these two big North American eclipses to arrive. And now that we’re less than three weeks out from the big day of August 21, it’s fascinating for me to see the media go crazy about this thing I’ve patiently waited for all these years.

So, with the knowledge that many of my engineering friends are similarly interested in this rare event, here are my takeaways on things I’ve seen in the media lately. 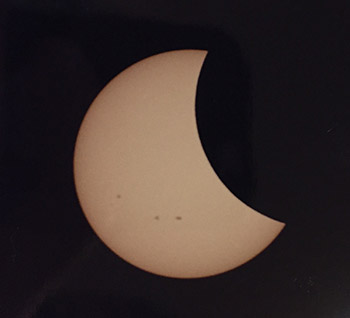 Partial phase of the July 11, 1991 eclipse as seen from Baja California. Photo by the author.

1. You’re not going to be wearing eclipse glasses all day. Let me start by saying that eclipses are dangerous for your eyes. You should NEVER look at the sun directly. Duh. We humans have a natural reflex to look away from the sun, but the retina doesn’t sense pain. During a solar eclipse, there comes a point when enough of the sun is covered that the reflex may be lost and you could potentially stare right at the remaining sliver of sun—and you’ll be DESTROYING YOUR VISION if you do! Please do not do this.

Totality happens in that 70-mile strip of land that runs from Oregon to South Carolina—this is where the sun becomes completely eclipsed. During this part, you can look directly at the spectacle, because there is no sun left to look at for those 2.5 minutes or so. You’ll be able to see the lovely solar corona and perhaps some reddish solar prominences leaping above the (blocked) solar surface.

Anyway, back to the glasses. They are only going to be used to observe the partial phases—when the moon has taken a bite out of the sun’s disk. When you put the glasses on, the lenses are so black that you won’t see a thing in any direction around you—only the sun’s disk when you look up. It’s interesting for 30 seconds or so and then you’ll be done. Trust me. Check back in five or 10 minutes to see if you can tell that the bite’s bigger. That’s it. The partial phases move slowly for the first hour or so, and only become interesting as totality approaches. 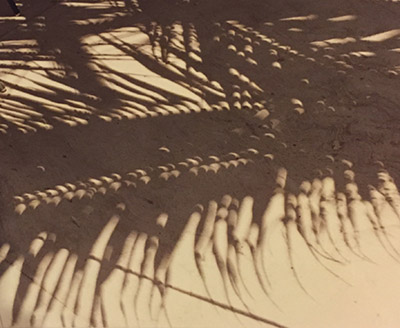 Crescents can be seen in the shadow of these palm trees at the July 11, 1991 eclipse as seen from Baja California. Photo by the author.

2. No, Ohioans and Floridians, you’re not going to be “seeing 85%” of the eclipse. I keep running across things on social media and television (even from meteorologists, professors and scientists) saying that we’re still going to see 80% or 90% of the eclipse from our locale here, so you don’t have to go anywhere. This frustrates me to no end.

The partial phases are, to be sure, rather cool to observe, including seeing the way the eclipse affects the lighting and makes crescents appear in things like trees’ shadows. But to say that seeing that is “pretty close to seeing the whole thing” couldn’t be further from the truth. All of the really cool stuff happens in and around totality. Seeing a partial eclipse vs. a total eclipse is like looking at a photo of the Grand Canyon in a book vs standing at the rim yourself and taking it all in. You can’t compare the two.

3. All of the rooms are gone. Don’t believe the “eclipse room packages” stuff. If you haven’t booked a hotel room by this point, you’re out of luck. The other day, I saw a $50-ish/night motel advertising for $850/night, and that was the only place left for maybe 75 miles. If you’re going to try and go, find a friend who lives in one of the center line states, whose couch you can crash on. And no one knows what traffic will be like the day of the eclipse … entire interstates may have to be shut down. No one really knows—this is almost like the reverse of a mass hurricane evacuation.

4. There’s just nothing like it. Seeing the shadow of the moon race up the western sky is terrifying and yet wonderous. All of twilight is compressed into a few short minutes. Stars and planets pop out. Birds and animals become confused by the apparent onset of nighttime. The temperature drops. The wind picks up. And then there’s that diamond ring and finally the solar corona. The horizon for 360° around you is bathed in sunset glow colors.

And, assuming you’re with other people, there will be cheering. Everyone’s on the exact same team, and everyone’s rooting for the spectacle. If you can manage to find your way to seeing totality later this month, please do so—you will thank me!