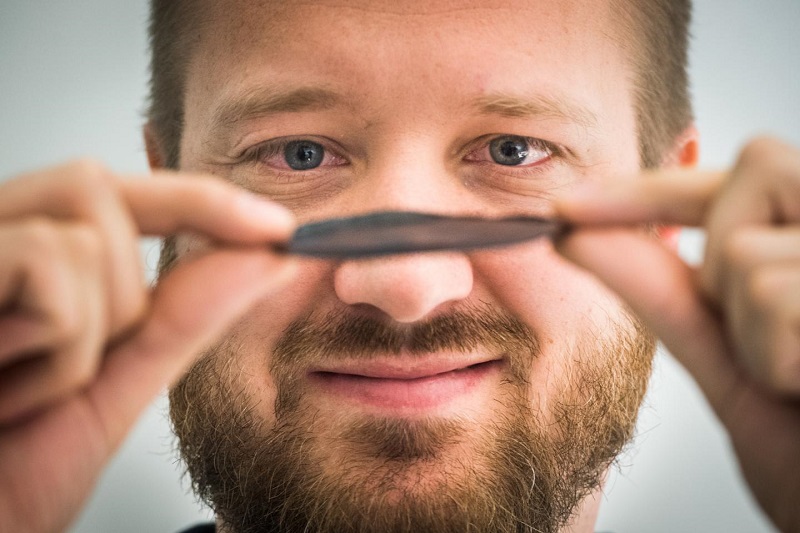 Linköping University researcher Klas Tybrandt has put forward a theoretical model that explains the coupling between ions and electrons in the widely used conducting polymer PEDOT:PSS. The model has profound implications for applications in printed electronics, energy storage in paper, and bioelectronics.

One of the most commonly used materials in organic electronics is the conducting polymer PEDOT:PSS, and tens of thousands of scientific articles have been published referring to the material and its properties. One of the major advantages of PEDOT:PSS is that it conducts both ions and electrons, but a model that explains how this works has, until now, not been available. We know that the material has several useful properties, but we don’t know why.

Klas Tybrandt, principal investigator in the Soft Electronics group at the Laboratory of Organic Electronics, Campus Norrköping, has developed a theoretical model for the interaction between ions and electrons that explains how ion transport and electron transport are related. The model has been published in the prestigious journal Science Advances.

“Classical electrochemical models have mainly been used in the past for this type of system, and this has led to a certain degree of confusion, since the models do not include the properties of semiconductors. We have used a purely physical description that clarifies the concepts,” said Tybrandt.

The material is a mixture of a semiconducting polymer and a polymer that conducts ions. The two phases are mixed down to the nanometer-scale, and even a thin film contains a huge number of interfaces. At the contact surface between the electronic and the ionic phases, what is known as an “electrical double layer” forms, which means that a charge separation builds up here between ions and electrons.

“We have combined semiconductor physics with a theory for electrolytes and electrical double layers, and we have been able to describe the properties of the material on a theoretical basis. We have also experimental results showing that the model agrees with laboratory measurements,” said Tybrandt.

PEDOT:PSS is one of several polymeric materials that act in the same way. Increased understanding of the material and its unique properties is a major advance for researchers in several areas of organic electronics.

One such area is printed electronics, where it is now possible to calculate and optimise the performance of electrochromic displays and transistors.

Another area that benefits from the new model is bioelectronics. Here, materials that conduct both ions and electrons are particularly interesting, since they can couple the ion conducting systems of the body with the electronic circuits in, for example, sensors.

“We can optimise the applications in a completely new way, now that we understand how these materials work,” said Tybrandt.

A third area is the storage of energy in paper, a field in which LiU researchers are world-leaders.

“Understanding the complexity of these polymers allows us to develop and optimise the technology. This will be one of the areas for the newly opened Wallenberg Wood Science Center,” said Tybrandt.

Main funding for the project has been provided by the Swedish Research Council and the Swedish government’s Strategic Research Area initiative into Advanced Functional Materials at Linköping University.