3D printing opens up design possibilities that engineers could once only dream of.

The technology allows manufacturers to create parts with unique and complex shapes—parts that conventional manufacturing methods such as die casting or injection molding can’t produce.

With 3D printing, also known as additive manufacturing, a machine creates a part by adding material in layers, building the object from the ground up. Because each new layer needs to be supported by the layer below it, there’s a limit to how much one layer in a complex part can jut out over the next. As a result, manufacturers often need to build structures to support a part as it’s being printed.

“But after the part is completed, removing that supporting material can be costly,” says Xiaoping Qian, a mechanical engineering professor at the University of Wisconsin-Madison. “These support structures are sometimes referred to as sacrificial structures, because they are discarded in the end, which wastes material and build time.”

Furthermore, it can be difficult to access and remove the support structure without risking damage to the finished part.

To address these issues, Qian has devised a method that significantly reduces the amount of support material needed to build components with 3D printing—and, in some cases, can even eliminate the need for support structures altogether. 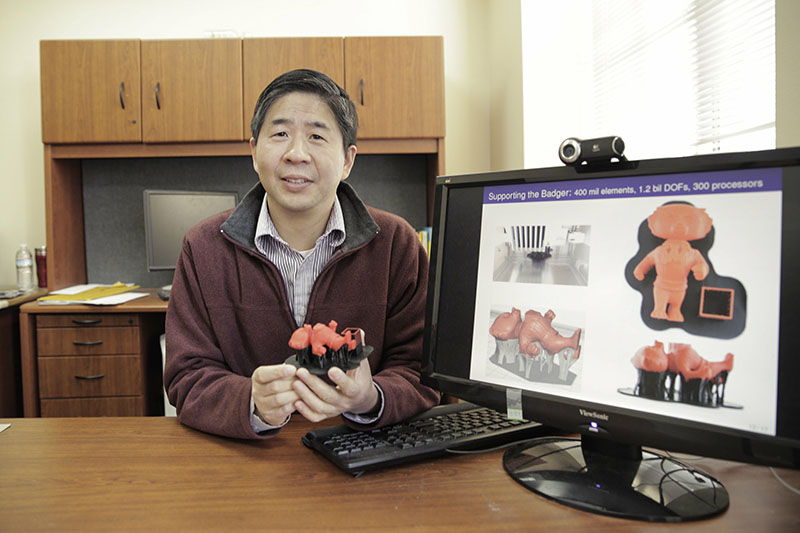 “Traditionally, the support structure is created by simply considering the geometry of the part, and then creating the columns needed for support,” Qian says. “But this isn’t optimized.”

His method streamlines the support structure using computational modeling tools. By enabling manufacturers to use the minimum amount of support material, the approach delivers faster build times as well as cost savings on material.

Qian’s techniques are broadly applicable for a wide variety of additive manufacturing technologies. So far, he has demonstrated the benefits of his approach using fused deposition modeling and 3D-printed metal parts using a laser powder bed fusion process. In one project, he used his techniques to design a part that required 43-percent less supporting material than would be used in the traditional additive manufacturing process relying on standard commercial design software.

This new approach grew out of Qian’s interest in exploring ways to improve the structural performance and functionality of parts by leveraging the design flexibility additive manufacturing offers. For example, he has designed parts with component shapes and topologies that are optimized to dissipate heat. Such parts would be useful for many applications requiring a heat sink, including in electronics.

The logical next step was optimizing the parts’ support structure. “Surprisingly, we didn’t see anyone else trying to use topology optimization to accomplish this,” Qian says.

He says a 3D-printed part generally needs support if there are areas where its surface is sloped facing downward.

However, in the topology optimization process, engineers first provide requirements for the part and overall design goals—and then a computer program performs analyses and generates ideal component topologies.

“So the challenge is, if you don’t know the geometry of the part in advance, then how would you know the surface slope and whether you would need support or not?” Qian says.

That’s where his breakthrough comes in—in a way that’s somewhat like predicting the future.

Qian developed a method for calculating the amount of surface area on a component that needs support—without knowing the part’s final geometry ahead of time. He says the key was defining a new measurement called the projected undercut perimeter. “When you calculate this new measurement, it essentially corresponds to the area that needs support,” he says.

By incorporating the new measure into his computer models, Qian is able to control the amount and angle of overhang—thus minimizing or even eliminating the support structure—when designing a part.

As a result, for example, he can design a component that’s optimized to dissipate as much heat as possible without needing any support structure to manufacture.

Designing such entirely self-supporting parts is an active research area for Qian, and his work is poised to benefit manufacturers looking to not only save money on materials and fabricate parts in less time but also create new types of parts with increased functionality.