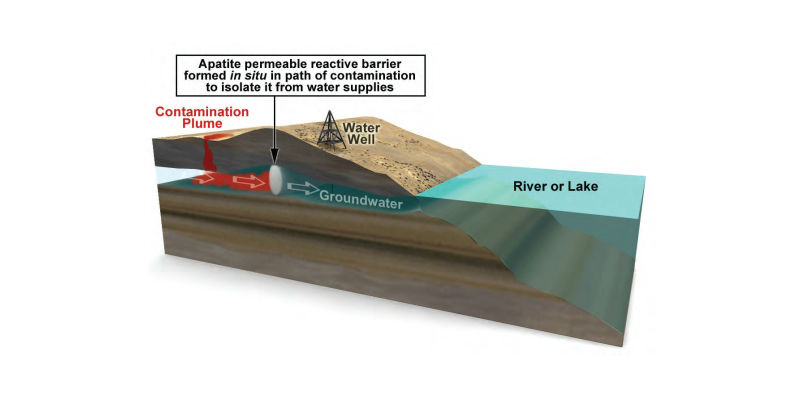 Sandia National Laboratories geochemist Mark Rigali and his colleagues are developing and deploying apatite-based technologies to protect groundwater at sites contaminated by radionuclides and heavy metals.

Apatite is currently being used at the U.S. Department of Energy’s Hanford Site in southeastern Washington State and the Fukushima Dai-ichi nuclear plant, “and, there are numerous other potential applications we are exploring,” Rigali said.

Crystals of apatite, a calcium-phosphate compound commonly used in fertilizer, can capture and hold a variety of radionuclide and heavy metal contaminants from groundwater. The compound forms a barrier when pumped into the ground.

“Apatite is a very versatile material. It can be deployed as a precipitated permeable reactive barrier in the subsurface or in a column as a granular solid for pump and treat remediation applications,” Rigali said.

Thousands of sites throughout the world are contaminated with radionuclides, heavy metals and natural contaminants that threaten groundwater, surface water and food supplies. According to a 2012 U.S. Geological Survey report, about half the global population relies on groundwater as their primary drinking water supply.

Sandia chemical engineer Robert Moore, who invented the apatite barrier technology, said the Hanford Site has used it successfully for eight years to sequester strontium-90 that threatens the Columbia River, a major source of water for three states.

The Hanford Nuclear Reservation is a World War II-era nuclear production that is contaminated with plutonium and other radioactive materials left over from eight decommissioned reactors.

Jim Szecsody, a geochemist at PNNL, said the laboratory originally asked whether the patented technology could work at Hanford.

“Before the barrier could be used, we had to figure out how to inject a solution into the subsurface to precipitate apatite without ‘flushing’ the mobile strontium-90 and making it more mobile,” Szecsody said.

Together, Sandia and PNNL tested the calcium apatite barrier using small and then scaled-up experiments that looked at reaction rates and pumping rates to customize geochemistry and delivery paths for the Hanford site. They used some of the calcium available in subsurface sediments to reduce the amount of injected calcium, which resulted in less flushing of the strontium-90.

“In some ways, it’s like growing crops. You need to know what’s there before you can figure out what nutrients you need to add,” Szecsody said.

The experimental customized barrier was then field-tested by Fluor Hanford Inc., the prime contractor for cleanup of the Central Plateau at Hanford. An apatite barrier was placed along a 300-foot-long section of Columbia River shoreline from 2005 to 2011.

The results were impressive: After six years, monitoring wells drilled between the barrier and the Columbia River indicated that the barrier sequestered more than 95 percent of the strontium before it could reach the river.

The initial work was so successful that CH2M HILL Plateau Remediation Company expanded the barrier in 2012 to protect 2,500 feet of Columbia River shoreline, and additional barriers are being considered.

How the barriers work

The barrier can be formed in a few ways, depending on the soil characteristics and the type of contaminant. Typically, an aqueous solution containing a compound of calcium citrate and sodium phosphate is pumped into the ground. As groundwater passes through the barrier, tiny apatite crystals, roughly the width of a human hair, bind to contaminants and immobilize them, allowing groundwater to flow through the barrier, and reducing or eliminating the need for groundwater treatment.

“The indigenous soil bacteria biodegrade the citrate (an organic compound) leaving calcium available to precipitate with phosphate as apatite, an insoluble and stable mineral that immobilizes contaminants,” Moore said.

The current commonly used method involves excavating a trench perpendicular to the contaminated groundwater flow-path and backfilling the trench with reactive media. Another method is high-pressure injection to force the reactive media into the soil. Both methods are disruptive and, in some instances, have actually altered the site geo-hydrology so much that some or all of the contaminated groundwater flows around the barrier instead of through it.

Apatite also can trap a wide variety of radionuclides and heavy metals.

“We recently initiated a project funded by DOE’s office of Legacy Management to determine the efficacy of apatite for remediating uranium contamination. PNNL will evaluate the apatite barrier in laboratory studies. If the laboratory studies indicate the apatite will hold uranium we will move on to field studies at the DOE’s Uranium Mill Tailings Remedial Action field site near Rifle, Colorado,” Rigali said.

Another potential application is the remediation of Hanford tank waste.

The Hanford site has 177 underground storage tanks in its “tank farms,” many of which date back to World War II. Most have outlived their anticipated design life, and some are leaking.

“With some research to determine soil pH, amounts of free calcium and soil porosity, the same technology could be used in areas around Hanford’s tank farms to contain numerous radionuclides from tank leaks. Apatite can capture and hold strontium, technetium, uranium, radium, plutonium and the actinides,” Rigali said.

Rigali said Sandia is having discussions with Washington River Protection Solutions, a contractor charged with cleanup of Hanford’s tank farms, about the use of stannous-treated apatite barrier to help prevent technetium, a highly mobile radionuclide with a long half-life, from travelling from the tanks into Hanford groundwater and the Columbia River.

“The method could be also used prophylactically to protect groundwater during drilling, hydraulic fracturing operations or with other excavation activities where the potential exists for groundwater contamination,” Rigali said.

One unanswered question is the longevity of the apatite barriers, so researchers are assessing how long contamination remains in its bound form.

“So far, the results indicate that the contaminants will remain sequestered for a long time,” said Rigali.