Smartphones and other portable products have made touch the human machine interface (HMI) of choice for many other products. Touch sensing is easy to implement, easy to use, reliable and cost-effective. However, there are many applications and situations where physically touching a device is not desired and, in fact, in some cases must be avoided. Before discussing a solution to these more restrictive applications, a little touch sensing background is in order.

According to a recent market report, there is a growing need for touch sensing [1]. The report projects the global touch sensors market will reach approximately USD 8.4 billion by 2023, growing at 12.8% compound annual growth rate (CAGR) over the forecast period 2018–2023. Typical touch sensing technologies include: resistive, capacitive, surface acoustic wave (SAW), infrared (IR), optical imaging and more recently acoustic pulse recognition (APR). In their most common implementation, these approaches all require actual contact with the surface. However, applications exist that do not want or must avoid physical contact and necessitate a more sophisticated sensing approach.

One possibility would be using a time-of-flight technology to identify mid-air interactions above a touchscreen [2]. Time-of-flight is a ranging technique that resolves the distance between the sensor and an object by measuring the time it takes for light to travel to an object and back to the sensor. The accuracy is on the order of 1 cm, which makes it unsuitable for touch interaction purposes. Improving the accuracy would generally mean a slower frame rate. Furthermore, this kind of sensor requires calibration and is sensitive to changes in temperature.

Another alternative is infrared technology. Traditional infrared touch requires a frame surrounding the screen with emitters on two adjacent sides and receivers on the opposing sides. The touch interactive area is raised from the screen by simply raising the frame around the screen. However, the resulting rim around the screen would not only be difficult to incorporate aesthetically in a device, it would also make the screen difficult to clean, thereby defeating one of the purposes for its usage.

Infrared touch can be implemented using reflective technology by mounting a sensor along one edge of a display. The interaction area consists of a sheet of light which is projected out of the sensor and positioned a desired distance above the surface of the display as shown in Figure 1.

Figure 1. An IR touch sensor using reflective technology has the interaction area raised above the screen.

The infrared touch sensor consists of an array of alternating emitters and receivers as shown in Figure 2. Laser emitters are preferred over LEDs since they are easier to collimate and generate less internal stray light within the sensor module. Any internal stray light needs to be kept to a minimum so that it does not interfere with the signal-generating light reflected from an object outside the detector. Vertical cavity surface emitting lasers (VCSELs) operating at 945 nm are used as emitters and silicon photodiodes are used as receivers. Molded polycarbonate lenses are used to collimate the light from the emitters and narrow the field of view of the receivers.

Using shared optics for both the emitters and the receivers forces the receiver’s field of view to make an angle toward the direction of the emitted light, as shown in Figure 3 (a). This angle typically varies between 17 and 26 degrees depending on the aspect ratio of the sensor’s detection area. Figure 3. (a) The emitter and receiver share part of the same optics, forcing the receiver field of view to make an angle toward the emitted light. (b) Each receiver looks across multiple emitter beams. The central part of each area of overlap between an outgoing beam and the receiver’s field of view is marked with a filled circle. With multiple emitters, the benefit of this geometry become more obvious. Each receiver looks across several emitters and for each emitter an area exists where the emitted light and the receiver’s field of view (FOV) overlap, as shown in Figure 3 (b). It is only in this area that a detector can receive a signal from an object illuminated by the specific emitter. Outside this region, the detector will not receive any signal at all.

Since each receiver is positioned between two emitters, the receiver will also detect light coming in through the optics shared with its other neighboring emitter. This enables the generation of a 2D-grid with overlapping regions.

During a scan, each emitter is scanned consecutively, while multiple receiver signals are recorded simultaneously. In contrast to IR proximity detectors, which rely on signal strength for object positioning, the design of the reflective technology sensor has turned object positioning into a geometrical question. An object’s position is determined based on which emitter-receiver combinations generate a signal during a scan.  Figure 4 shows detection of an object close to the sensor as well as the detection of an object positioned further away from the sensor. Each detection is based on signals from two emitters and three receivers. The emitters are the same, but the receivers are different, which makes it possible to distinguish between the two object locations. Figure 4. Depending on the object’s position, reflected light is detected by different receivers. All sensors share a common width (14.5 mm) and thickness (3.46 mm) (see Side Bar). Figure 5 shows a detailed view of the sensor and its internal components. Electrical integration is performed via the connector at the edge of the printed circuit board assembly (PCBA). There are 8 contact pads and the PCB outline matches that of a standard 0.3-0.33-mm thick flexible flat cable (FFC)/flexible printed circuit (FPC) connector with 1-mm pitch and top-mounted connectors. This connection enables the sensor to communicate with a host system through a standard USB or I2C interface.

Figure 5. The internal structure of a reflective IR touch sensor shows how its components come together into a single structure.

For many applications, it would be either nice or extremely desirable to interact with a display or surface without actually touching it. A sensor based on reflective infrared technology provides a solution to contactless touch interaction. By controlling the spacing between the sensor and the display, the sheet of light projected by the sensor can be raised above the display. The resulting touch interaction area hovers above the display and makes the display responsive to touch without any physical contact between the user and the display. This touchless touch sensing provides safe interaction in medical applications, food dispensing and, in fact, any public area with frequent machine interfaces where the risk of pathogen transmission exists. 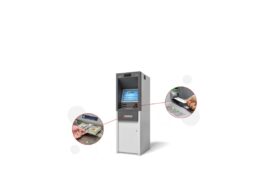 How do sensors impact ATMs? 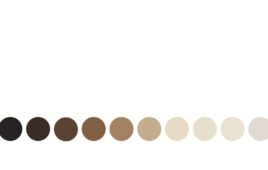 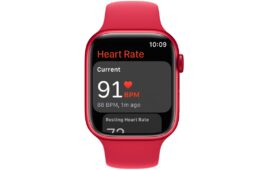