Connecting the many different industrial Ethernet protocols found in a typical plant or facility can be a headache, but an HMI can relieve the pain.

Many older automation systems and networks are becoming obsolete but they still work great. Industrial Ethernet evolved from an earlier version of Ethernet, and includes many features from fieldbus-style communications standards that were supposed to be used instead of Ethernet. These fieldbus-style standards include DeviceNet, Control Area Network (CAN), Profibus, Modbus and CCLink. These networks are still widely used, but they are slowly moving to the obsolete side of the scale.

Technology is moving many from these serial networks towards Industrial Ethernet to take advantage of its speed and flexibility. Industrial Ethernet is now handling real-time control networks and is well suited to communicate with more complex devices such as motion controllers and drives. It also provides the technology to connect to the IIoT. 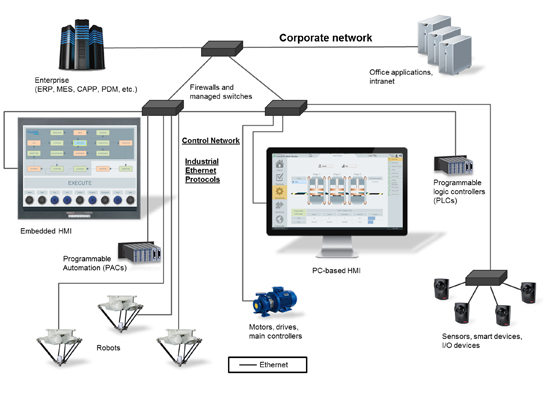 While many networks have changed from proprietary to open standards, Ethernet sets the bar as the most open of all networks in terms of hardware, but not with respect to all layers of its communication protocol, particularly for industrial applications. All variants of Industrial Ethernet share some or all hardware, but there are still many different Ethernet-based protocols, including:

Ethernet TCP/IP is the leading standard for communication on Ethernet hardware. A simple description is that it’s the internet connection between two or more devices that makes sure data are sent and delivered correctly. Most other industrial Ethernet protocols use all or part of this protocol in various ways. 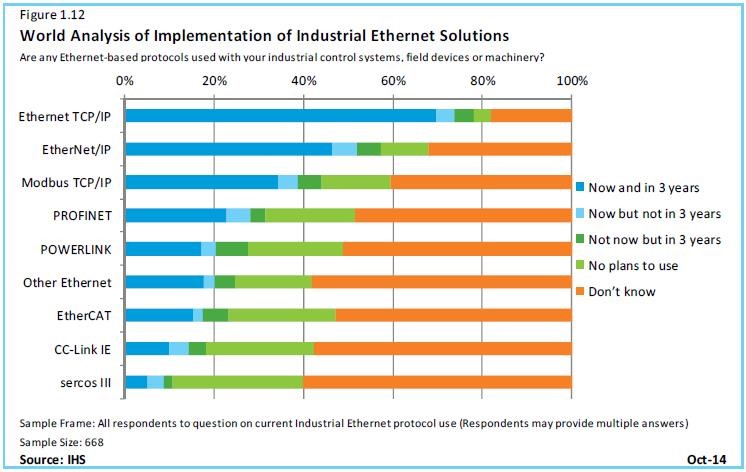 This chart lists some of the leading industrial Ethernet protocols and planned adoption rates. (courtesy of IHS).

These different Industrial Ethernet protocols were developed by leading automation manufacturers. For example, EtherNet/IP was developed by Rockwell Automation and created from DeviceNet and ControlNet using the same Common Industrial Protocol (CIP) over TCP/IP. Like most of the other industrial Ethernet protocols, EtherNet/IP is now open and administered by an independent foundation.

Modbus TCP/IP is the industrial Ethernet version of the original Modbus RTU protocol developed by Modicon in 1979. It’s a client/server configuration that’s easy to implement but not deterministic.

Profinet is the Industrial Ethernet version of Profibus. It’s the protocol of choice for Siemens and many European suppliers, and it comes in three different variations offering different degrees of performance.

Powerlink was developed by B&R Automation and sits on top of IEEE 802.3, the Media Access Control (MAC) layer of Ethernet. Time synchronization, enabled by a master, managed node, makes it a fast and deterministic option.

EtherCAT was developed by Beckhoff Automation using a MAC level protocol. Much of the data is handled in the hardware layer to reduce latency, making it a good choice for high-speed motion applications with many connected nodes.

Sercos III is like EtherCAT with its on-the-fly packet processing for very fast real-time control, and adds TCP/IP communication as well. It is commonly used in servo drive applications.

CC-Link IE was developed by Mitsubishi, and it has a control and field version. The control version ties controllers together, and the field version links I/O and motion control components. Both versions use the Ethernet data link layer.

Although multiple Industrial Ethernet protocols can travel over one Ethernet cable, they each contain different types of messaging and data schema that make it impossible for them to communicate with each other directly. An HMI is one solution to enable communication among these different protocols.

The HMI can be either PC-based, or it can run on an embedded operating system such as Windows Embedded or Linux. In either case, the HMI acts as the communications hub, enabling different Ethernet protocols to talk to each other.

The first step when implementing an HMI as the communications hub is to select the right software. Although many PC-based HMIs support the leading industrial Ethernet protocols, some embedded HMIs may only work with a few.

On the other hand, the right HMI software, whether embedded or PC-based, offers a more open option. These HMIs can communicate with hundreds of industrial protocols, serial and Ethernet, allowing users to make connections to just about any type of industrial automation components with a communications port. Some HMI software packages also offer support for communication with custom and proprietary protocols, although this always requires some configuration or programming.

Advantages of an HMI hub

Why use an HMI hub instead of an alternative solution? After all, one could instead use hardware-based protocol convertors, or even switch the entire plant or facility to one protocol.

Selecting and configuring a software protocol driver in HMI software to communicate to a new device through Ethernet or some other industrial communications protocol is simpler than adding protocol conversion hardware and it’s also the low-cost option. The number of required protocol converters can quickly multiply, forcing plants and facilities to stock many components. While not common, hardware malfunctions do occur, and these points of failure can be eliminated through a software-based approach.

Switching all of the automation components in a plant to one protocol is often not practical, particularly in older plants and facilities. Many devices may run on different protocols, especially in legacy automation systems. As industry moves to make connections to these legacy systems to make them part of the IIoT, switching to a common protocol would be expensive as it would require replacing legacy automation systems which are still functioning properly.

Even in new systems, some OEM equipment will use different protocols. Instead of disrupting well-functioning automation systems, or requiring OEM suppliers to adhere to one protocol standard, and HMI can make the required connections. This is especially effective in monitoring applications where real-time protocols are not needed. For example, many items of OEM equipment use their on-board automation systems to control operation, with communication to other systems for monitoring and coordination through an HMI. Table 2 summarizes the advantages of using an HMI as the communication hub. These advantages include:

The use of tags to exchange data among automation controllers is common, and it is now easy to import tag names from a controller to an HMI, speeding integration and reducing development time.

Finally, as industrial Ethernet is based on the well-developed commercial Ethernet, the security requirements and functions are well understood. While good design practice keeps the office/enterprise network separate from the control network, some common cybersecurity rules and procedures can be implemented to keep the both networks safe.

In a large assembly system, there are often many devices including controllers, robots, drives, motion controllers and smart sensors (Figure 2). All of these devices can be connected with industrial Ethernet networks using various protocols. These connections may be for real-time control, or for data and information purposes only.

For real-time control, the chosen protocol should focus on deterministic operation of the machines and equipment. The most efficient method is to use a single protocol. If high-speed communication among different protocols is necessary, protocol converter hardware may be the only practical answer because converting protocols through the HMI software would take too long.

For data and information networks, the HMI can communicate with many devices simultaneously through multiple protocols. It can be used to exchange data among various automation systems for coordination and sequencing. The HMI can also acquire, store, process and transmit information to other platforms such as ERP, production management and asset management systems. All these data need to evolve into information without interfering with the control network. The HMI can perform this task by only exchanging selected data with higher-level systems, while at the same keeping the operators informed with real-time operating information.

The key point is that the real-time networks need to run fast and cannot be slowed down by data collection and information. Users can set priorities by using the HMI as a hub along with the appropriate Ethernet switches and routers. This allows exchange of data with higher-level systems, and among various automation systems, with little or no impact on the real-time control functions of the network.

The right HMI can be used as a hub in an industrial Ethernet network to link automation systems, equipment and machines. It is often the best option to line many different protocols, is flexible enough for use in legacy or new applications. It’s also low cost and easy to integrate.