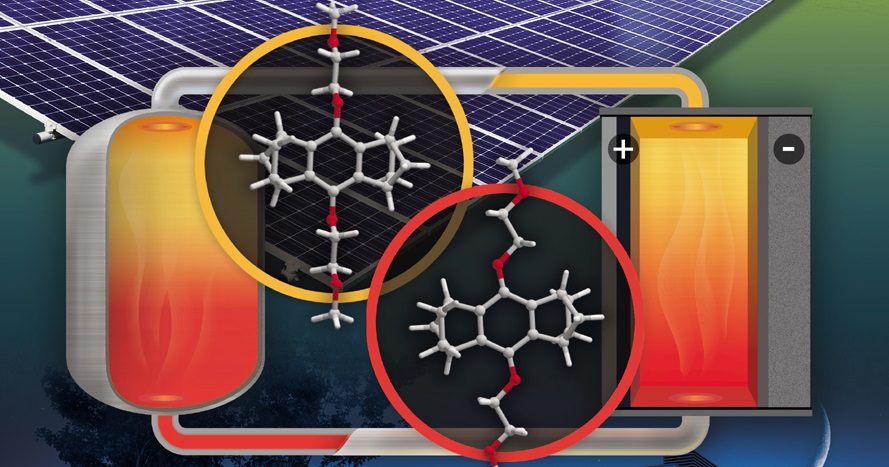 A new material developed at Argonne shows promise for batteries that store electricity for the grid. The material consists of carefully structured molecules designed to be particularly electrochemically stable in order to prevent the battery from losing energy to unwanted reactions. Image credit: Robert Horn, Argonne National Laboratory

A new material shows promise for batteries that store electricity for the grid. The material, created by scientists at the U.S. Department of Energy’s (DOE) Argonne National Laboratory, consists of carefully structured molecules designed to be particularly electrochemically stable in order to prevent the battery from losing energy to unwanted reactions. The results of the experiment, some of the best ever recorded for batteries of this type, are published today in Advanced Energy Materials.

In this type of battery, called nonaqueous redox flow, energy is stored in negatively and positively charged solutions inside large tanks.

The molecular makeup of the energized solutions in the tanks plays a major role in how much energy the battery is able to produce, and this research focused on designing the ideal molecule to dissolve in the positively charged tank. To maximize efficiency, the researchers had to structure the molecule to hold as much energy as possible while also being stable enough to limit superfluous reactions.

“We want the stability of the molecules to be high so the battery doesn’t break down prematurely, but we also want it to be able to hold a lot of energy. The two are at odds,” said Jingjing Zhang, a postdoc involved in the research.

The molecule’s reversibility, or its ability to be repeatedly charged and discharged, is the very property that allows flow batteries to function. During charging, molecules stored in the positively charged tank shed electrons through a process called oxidation. A problem arises when these now unstable, positively charged molecules begin to react with their surroundings, sapping the charge that would otherwise be stored in the tank and used for power.

“When it loses an electron, the molecule has a natural tendency to find another electron for a complete pair, and if they form a bond, that means it can’t produce electricity anymore,” said Lu Zhang, the leading scientist on the team.

The researchers on this project were able to shut down a common energy-sucking side reaction using a process called bicyclic substitution, which protects the most reactive parts of the molecule’s atomic scaffolding, somewhat like using insulation to cover exposed wires.

Bicyclic substitution itself is not new, but this research was the first to apply it to battery materials. Previously, battery scientists used bulkier protective atomic chains to increase stability. However, these shields tended to suffocate the battery; only half of the reactive molecular regions could be covered without eliminating the molecule’s ability to give off any energy at all.

“With bicyclic substitution, we finally found a way to protect all of the molecule’s reactive positions without losing its reversibility, and we were able to get very good performance out of it,” said Lu Zhang.

The researchers discovered that the battery suffered only a minimal loss of capacity after 150 cycles of charging and draining the battery, proving the high stability of the molecule.

“Bicyclic substitution allows us to avoid compromising between stability and reversibility,” said Jingjing Zhang. “Maximizing these two properties is key in engineering more efficient batteries for powering entire buildings and even larger systems in the future.”