The Pennsylvania Railroad (PRR) T1 Steam Locomotive Trust is using SOLIDWORKS to build the world’s fastest steam locomotive, the PRR T1 5550, which represents the pinnacle of steam locomotive design in the United States.

Evidence suggests that the T1 locomotives could attain speeds greater than 140 mph. However, the day-to-day grind of railroading in the United States immediately following World War II did not allow for the luxury of a world record attempt. Therefore, the current world record of 125.88 mph is held by a locomotive known as the Mallard in the UK.

The T1 Trust intends to set the record straight by constructing PRR T1 5550 and allowing her to claim her rightful place as the thoroughbred champion of steam locomotives. 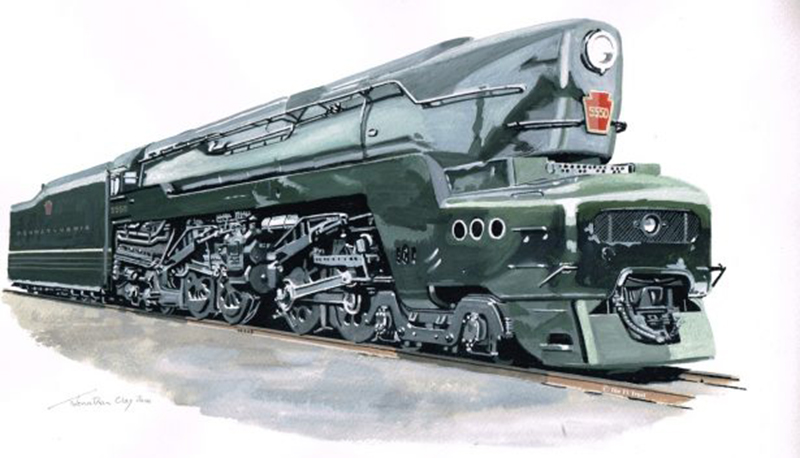 The 5550 Launch Painting by world-renowned Transport Artist Jonathan Clay gives a glimpse of what the finished T1 locomotive will look like.

In all, 52 class T1 locomotives were produced, 25 at the PRR’s Altoona shops and 27 at the Baldwin Locomotive Works in Philadelphia. Sadly, not a single example of this magnificent machine escaped the scrapper’s torch. The T1 Trust is a non-profit organization that seeks to right this wrong.

Through hard work, dedicated volunteers and the financial support of many generous donors, the T1 Trust is building PRR T1 5550. Slated to become the fifty-third locomotive of her class when complete, 5550 combines stunning art deco design with a unique wheel arrangement specifically engineered for high-speed operation. The goal is simple: to provide mainline steam excursion service and set the World Speed Record for a steam locomotive.

The T1 Trust is a labor of love, and seeks to bring back to life the PRR T1 locomotive so she can be enjoyed for generations to come. The production of PRR T1 5550 will fill a large gap in historical locomotive preservation.

Perhaps more importantly, this locomotive will inject new life blood into an aging heritage fleet. Most US built steam locomotives operating today are over 60 years old. Wear and tear are taking their toll. Efforts such as this one, to create a powerful new machine, will become increasingly important if steam excursion service is to be present in another 60 years. 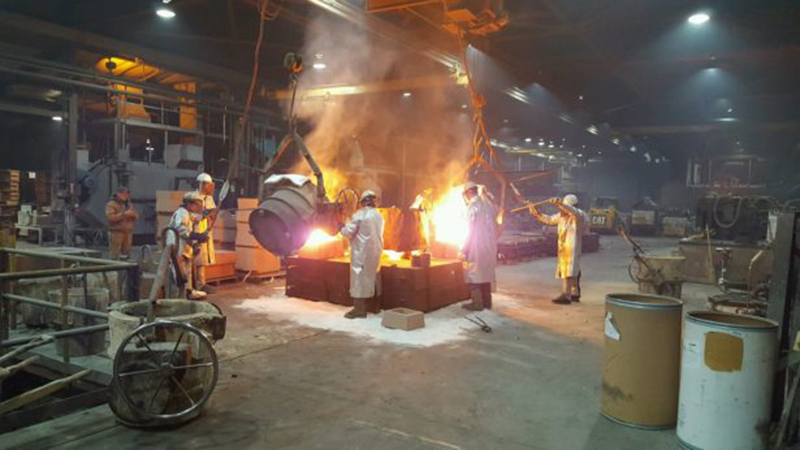 Here is the driver being cast. The steel was heated to 2,800 degrees Fahrenheit and then poured into the mold from two sites simultaneously. The entire pour took just less than two minutes, and history was made as the PRR T1 Trust cast the first Boxpok driver in nearly 70 years. 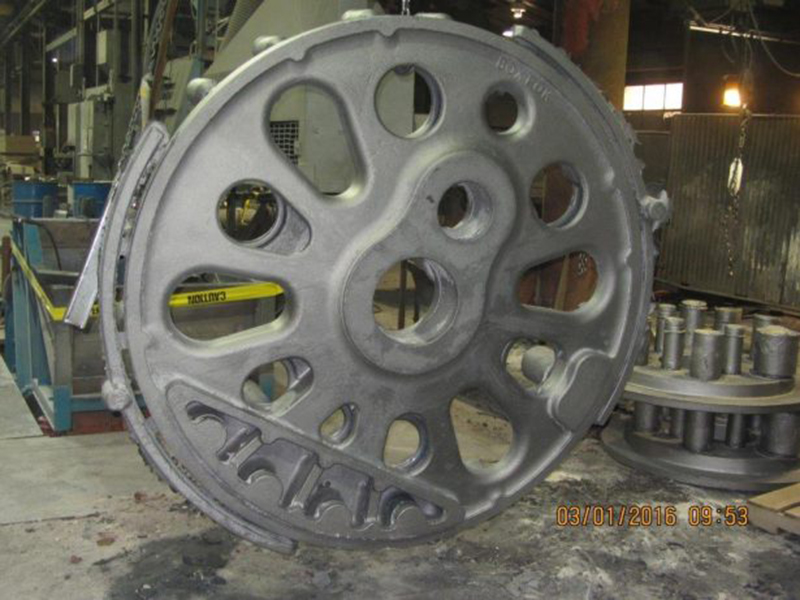 The first Boxpok driver fresh out of the mold.

On February 26, 2016 the PRR T1 Trust reached a major milestone when it cast the first Boxpok (Box Spoke) driver the United States has seen in nearly 70 years. A video of that historic moment can be seen below.

Unlike a typical spoked driver, a Boxpok driver is almost entirely hollow. This design promotes a favorable strength-to-weight ratio and allows the fine tuning necessary for high-speed operation. 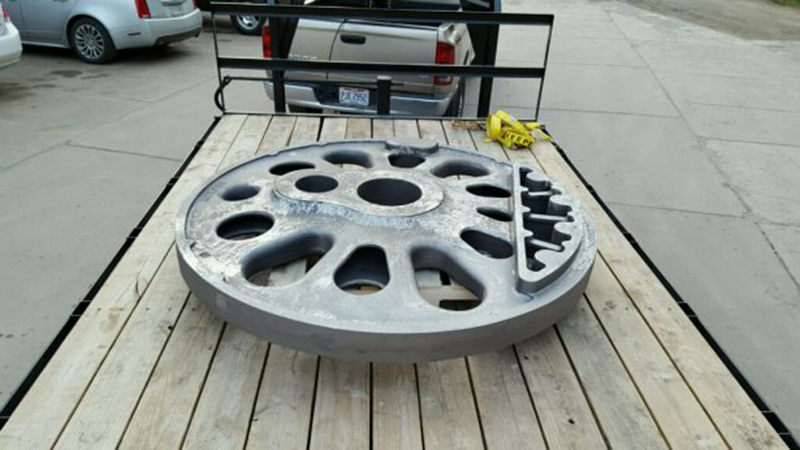 The first step in the driver casting process was to obtain the original drawings from the Pennsylvania State Archives in Harrisburg, PA.  Members of The T1 Trust spent countless hours pulling old drawings and scanning them in to digital format (image below). This is painstaking work and to the Trust’s credit, over 1,200 PRR T1 mechanical drawings and blueprints have been located and scanned thus far. 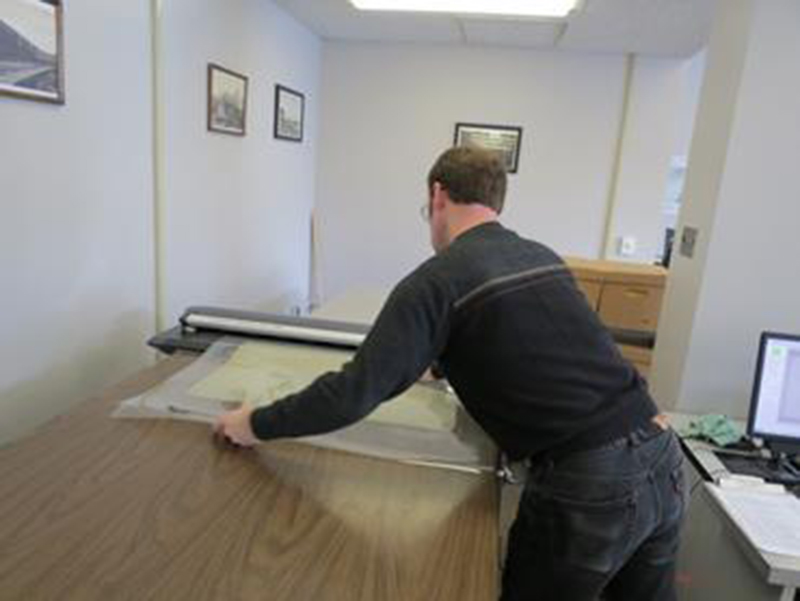 A volunteer feeds the document into the scanner. Larger drawings can be more than 12 feet long & too heavy for the scanner to process without being supported on both sides.

Once the Trust obtained scans of the original driver drawings, they were sent to the Trust’s senior CAD draftsmen. Over the next three months, the 2D drawings would transform using SOLIDWORKS into 3D digital models. Every measurement was meticulously checked and rechecked by the Trust’s CAD team. Once everyone was confident that the SOLIDWORKS model (image below) was an exact duplication of original blueprint, the next phase could begin.

Don’t miss Part 2 of this series, which will run next week, to learn about the team’s challenging next step in creating the world’s fastest steam locomotive: finding a foundry capable and willing to take on such a large complicated project. You can also learn more about the project by clicking here.

This blog originally appeared on blogs.solidworks.com/solidworksblog.