On the rust-colored north flank of one of Earth’s largest volcanoes, a backpack-sized instrument monitors our atmosphere and, at the same time, helps set the stage for possible human exploration of other worlds.

Designed and built at NASA’s Goddard Space Flight Center in Greenbelt, Maryland, the instrument tracks levels of methane and carbon dioxide, two gases crucial for studying the chemistry of Earth’s atmosphere. Portable and nearly self-contained, the unit could represent the start of a low-cost global network to provide atmospheric monitoring even in hard-to-reach locations.

Recently, a Goddard team deployed the instrument for field testing high on Mauna Loa, in a remote region considered an analog site for Mars. There, the instrument is being maintained by the crew living in the habitat known as HI-SEAS–short for Hawai’i Space Exploration Analog and Simulation, a NASA-funded project run by the University of Hawai’i at Manoa to help prepare for the possibility of long-duration missions on the surfaces of other planets or moons.

“The partnership with HI-SEAS gives us a unique opportunity to test our instrument’s performance and, at the same time, to help train the team to maintain and operate equipment under challenging conditions similar to those that explorers would face,” said Goddard scientist Emily Wilson, who developed the instrument.

Called the miniaturized laser heterodyne radiometer, or mini-LHR, the instrument measures the total amount of methane and carbon dioxide in the atmospheric column, which is essentially a straight line from the ground to the top of the atmosphere. The system is passive, collecting only sunlight, and nothing leaves the unit–not even stray light. The instrument has sensitivities as low as 1 part per million for carbon dioxide and 10 parts per billion for methane.

Inside the unit, the sunlight gets mixed with a laser beam in a technique that’s similar to the way an FM radio receiver operates. Instead of an antenna, the instrument is equipped with a telescope. To boost its sensitivity to weak signals, the mini-LHR carries a tiny infrared laser, like those used in telecommunications.

Atmospheric gases are identified by the absorption of light at particular infrared wavelengths; the pattern for each gas is as unique as a fingerprint. Right now, the instrument monitors carbon dioxide and methane, but it could be set up to track carbon monoxide and water vapor, as well.

Goddard’s Jacob Bleacher, a planetary geologist collaborating with Wilson, envisions a time when instruments like this might be deployed on the surface of another world.

“We foresee a need for instrument packages designed for environmental monitoring at and around human landing sites on Mars or other planetary surfaces,” said Bleacher. “To preserve our ability to conduct research in those locations, we will need to establish what the environment was like before human arrival and to monitor it the entire time humans are present.”

Wilson partnered with Bleacher to develop a protocol to train the HI-SEAS crew to use the mini-LHR. Bleacher also will conduct follow-up studies to assess the effectiveness of the HI-SEAS training.

The challenging part of the training was that Wilson’s team couldn’t meet or speak to the HI-SEAS crew in person. That’s because the 8-month habitat mission requires the crew to live the kind of confined, regimented lifestyle that future Mars astronauts might experience. They carry out scientific research and geological field work while carefully managing their consumption of food, water and power. The six-person team eats, sleeps and works in a dome that has about 1,200 square feet of floor space–the rough equivalent of a two-bedroom apartment.

The team conducts all communication either by email, with messages delayed by 20 minutes to simulate the travel time between Earth and Mars, or through a video link similar to the one used for the International Space Station. Whenever the crew exits the habitat, they wear full body suits, including helmets and gloves.

The decision not to train the HI-SEAS team to operate the mini-LHR before their mission began was intentional.

“Long-duration human stays on Mars will likely involve situations in which the crew would want to use the hardware available to them in new ways or for new purposes,” said Bryan Caldwell, the HI-SEAS project manager. “Additional training would have to be done remotely in a situation like that.”

At least once a week now, team members suit up and trek a quarter-mile across a rock-strewn expanse of solidified lava to check on Wilson’s instrument and download the data onto a memory stick. To make it possible to do that while wearing bulky gloves, A. J. DiGregorio, a member of Wilson’s team, equipped the unit with a touch screen and stylus, similar to the signature pads used in checkout lines at stores.

After the EVA, or extravehicular activity, is done, the team members return to the habitat and upload the data to share with Wilson’s team. So far, Wilson is pleased with the data she has seen, and soon she will start comparing the readings to other data sets, such as the carbon dioxide measurements that have been made on Mauna Loa since 1958.

In the meantime, Wilson’s team continues to focus on miniaturizing the mini-LHR’s components. Her goal is to deploy a network of instruments, first on Earth and later, well, even the sky isn’t the limit. 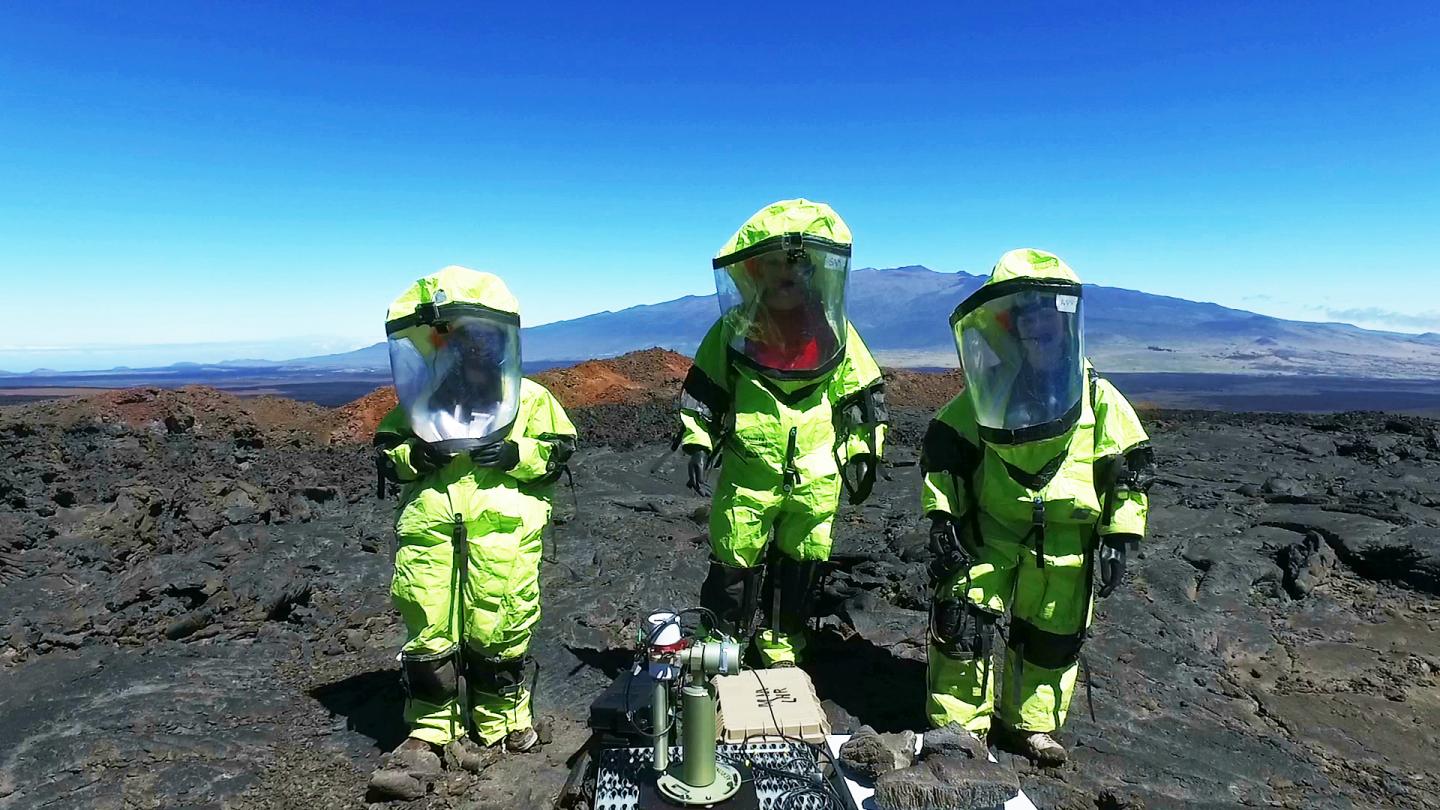