Using thousands of nanometer-scale wires, the researchers at the Georgia Institute of Technology have developed a sensor device that converts mechanical pressure – from a signature or a fingerprint – directly into light signals that can be captured and processed optically. 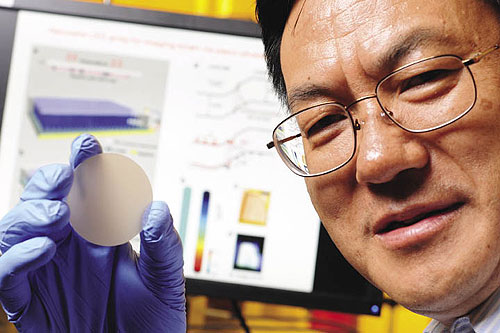 Researchers have developed a sensor device that converts mechanical pressure– from a signature or a fingerprint – directly into light signals that can be captured and processed optically. Shown is Professor Zhong Lin Wang of the Georgia Institute of Technology. (Georgia Tech Photo: Gary Meek)

The sensor device could provide an artificial sense of touch, offering sensitivity comparable to that of the human skin. Beyond collecting signatures and fingerprints, the technique could also be used in biological imaging and micro-electromechanical (MEMS) systems. Ultimately, it could provide a new approach for human-machine interfaces.

“You can write with your pen and the sensor will optically detect what you write at high resolution and with a very fast response rate,” said Zhong Lin Wang, Regents’ professor and Hightower Chair in the School of Materials Science and Engineering at Georgia Tech. “This is a new principle for imaging force that uses parallel detection and avoids many of the complications of existing pressure sensors.”

Individual zinc oxide (ZnO) nanowires that are part of the device operate as tiny light emitting diodes (LEDs) when placed under strain from the mechanical pressure, allowing the device to provide detailed information about the amount of applied pressure. Known as piezo-phototronics, the technology – first described by Wang in 2009 – provides a new way to capture information about pressure applied at very high resolution: up to 6,300 dots per inch.

Piezoelectric materials generate a charge polarization when placed under strain. The piezo-phototronic devices rely on that physical principle to tune and control the charge transport and recombination by the polarization charges present at the ends of individual nanowires. Grown atop a gallium nitride (GaN) film, the nanowires create pixeled light emitters whose output varies with the pressure, creating an electroluminescent signal that can be integrated with on-chip photonics for data transmission, processing and recording. 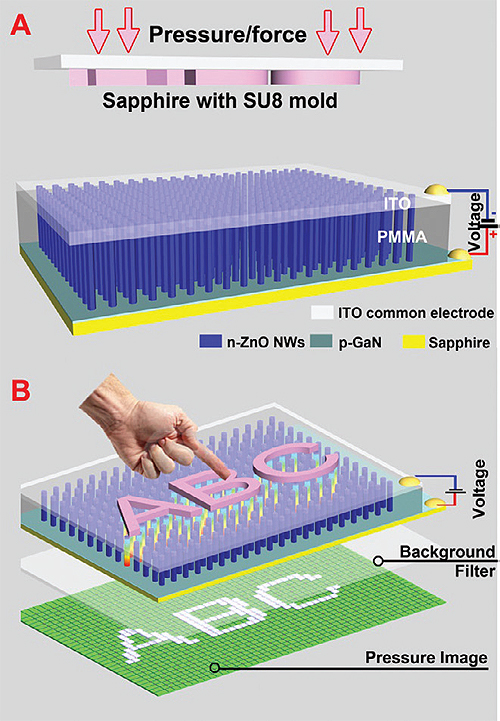 This schematic shows a device for imaging pressure distribution by the piezo-phototronic effect. The illustration shows a nanowire-LED based pressure sensor array before (a) and after (b) applying a compressive strain. A convex character pattern, such as “ABC,” molded on a sapphire substrate, is used to apply the pressure pattern on the top of the indium-tin oxide (ITO) electrode. (Courtesy of Zhong Lin Wang)

“When you have a zinc oxide nanowire under strain, you create a piezoelectric charge at both ends which forms a piezoelectric potential,” said Wang. “The presence of the potential distorts the band structure in the wire, causing electrons to remain in the p-n junction longer and enhancing the efficiency of the LED.”

The efficiency increase in the LED is proportional to the strain created. Differences in the amount of strain applied translate to differences in light emitted from the root where the nanowires contact the gallium nitride film.

A nickel-gold electrode is then used to form ohmic contact with the bottom gallium-nitride film, and a transparent indium-tin oxide (ITO) film is deposited on the top of the array to serve as a common electrode.

When pressure is applied to the device through handwriting or other source of pressure, nanowires are compressed along their axial directions, creating a negative piezo-potential, while uncompressed nanowires have no potential.

The researchers have pressed letters into the top of the device, which produces a corresponding light output from the bottom of the device. This output – which can all be read at the same time – can be processed and transmitted.

The ability to see all of the emitters simultaneously allows the device to provide a quick response. “You can read a million pixels in a microsecond,” said Wang. “When the light emission is created, it can be detected immediately with the optical fiber.”

The nanowires stop emitting light when the pressure is relieved. Switching from one mode to the other takes 90 ms or less.

The researchers studied the stability and reproducibility of the sensor array by examining the light emitting intensity of more than 20,000 individual pixels under strain for 25 repetitive on-off cycles. They found that the output fluctuation was approximately 5%, much smaller than the overall level of the signal.

A spatial resolution of 2.7 microns was recorded from the device samples tested so far. Wang believes the resolution could be improved by reducing the diameter of the nanowires – allowing more nanowires to be grown in a given space – and by using a high-temperature fabrication process.