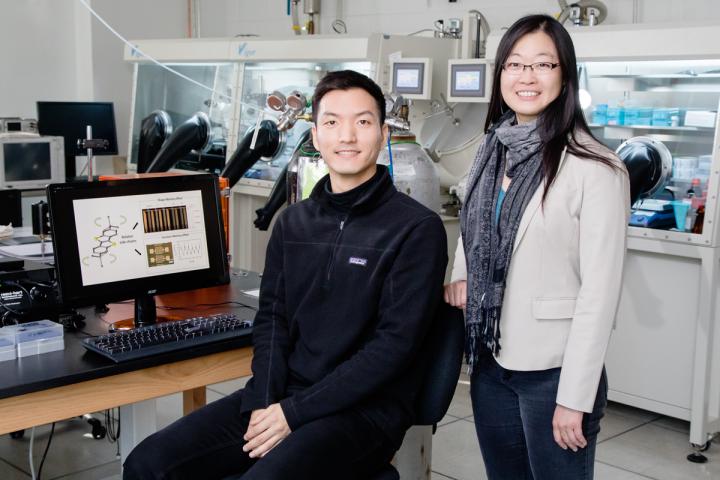 The findings are published in the journal Nature Communications and confirm the shape-memory phenomenon in two organic semiconductors materials.

Devices like the expandable stents that open and unblock clogged human blood vessels use shape-memory technology. Heat, light and electrical signals, or mechanic forces pass information through the devices telling them to expand, contract, bend and morph back into their original form – and can do so repeatedly, like a snake constricting to swallow its dinner. This effect works well with metals, but remains elusive in synthetic organic materials because of the complexity of the molecules used to create them.

“The shape-memory phenomenon is common in nature, but we are not really sure about nature’s design rules at the molecular level,” said professor of chemical and biomolecular engineering and co-author of the study, Ying Diao. “Nature uses organic compounds that are very different from the metal alloys used in shape-memory materials on the market today,” Diao said. “In naturally occurring shape-memory materials, the molecules transform cooperatively, meaning that they all move together during shape change. Otherwise, these materials would shatter and the shape change would not be reversible and ultrafast.”

The discovery of the shape-memory mechanism in synthetic organic material was quite serendipitous, Diao said. The team accidentally created large organic crystals and was curious to find out how they would transform given heat.

“We looked at the single crystals under a microscope and found that the transformation process is dramatically different than we expected,” said graduate student and co-author Hyunjoong Chung. “We saw concerted movement of a whole layer of molecules sweeping through the crystal that seem to drive the shape-memory effect – something that is rarely observed in organic crystals and is therefore largely unexplored.”

This unexpected observation led the team to want to explore the merger between shape-memory materials science and the field of organic electronics, the researchers said. “Today’s electronics are dependent on transistors to switch on and off, which is a very energy-intensive process,” Diao said. “If we can use the shape-memory effect in plastic semiconductors to modulate electronic properties in a cooperative manner, it would require very low energy input, potentially contributing to advancements in low-power and more efficient electronics.”

The team is currently using heat to demonstrate the shape-memory effect, but are experimenting with light waves, electrical fields and mechanical force for future demonstrations. They are also exploring the molecular origin of the shape-memory mechanism by tweaking the molecular structure of their materials. “We have already found that changing just one atom in a molecule can significantly alter the phenomenon,” Chung said.

The researchers are very excited about the molecular cooperativity aspect discovered with this research and its potential application to the recent Nobel Prize-winning concept of molecular machines, Diao said. “These molecules can change conformation cooperatively at the molecular level, and the small molecular structure change is amplified over millions of molecules to actuate large motion at the macroscopic scale.”