It’s officially fall, but warm days still linger, leaving some to flip on the air conditioner.

A team of researchers at the Massachusetts Institute of Technology has developed self-shading windows that may help those suffering from sweltering summer days save on cooling costs.

The windows switch from transparent to opaque, blocking out sunlight on bright days.

“While other systems for causing glass to darken do exist, the new method offers significant advantages by combining rapid response times and lower power needs,” said an article from MIT. “Once the glass is switched from clear to dark, or vice versa, the new system requires little to no power to maintain its new state; unlike other materials, it only needs electricity when it’s time to switch back again.” 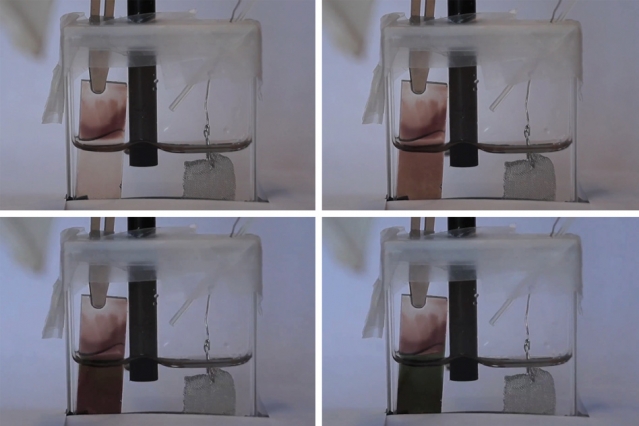 The glass was developed by Mircea Dincǎ, professor of chemistry; doctoral student Khalid Al-Kaabi; and Casey Wade, an assistant professor at Brandeis University.

Current electrochromic windows are used in niche applications. For example, Boeing 787 aircraft use them to keep bright sunlight from glaring through the cabin.

“When you flip the switch, it actually takes a few minutes for the window to turn dark,” said Dincǎ. “Obviously, you want that to be faster.”

These materials take a few moments to work because they rely on a movement of electrons that give the whole window a negative charge. Positive ions then move through the material to restore the electrical balance, providing that color-changing effect. The electrons move quickly, but ions creep along, limiting the reaction time.

The MIT team overcame this obstacle by using sponge-like materials called metal-organic frameworks. These conduct both electrons and ions at high speeds.

The other problem with current self-shading materials is that they rarely turn completely black.

“It’s hard to get a material that changes from completely transparent to, let’s say, completely black,” said Dincǎ.

Dincǎ’s team was previously able to make material that turned from clear to shades of blue or green, but this new discovery can go all the way from clear to nearly black. The researchers combined two chemical compounds – an organic material and a metal salt.

“These could lead to pretty significant energy savings,” Dincǎ said. “You could just flip a switch when the sun shines through the window, and turn it dark.”

The researchers are still testing the new windows.