Companies using a large number of interconnected devices need to make sure they can communicate quickly, without breaking the bank. Technology licensing company WindSpring Inc. is trying to solve that problem with a new tool called SpringBoard, released on May 9. Tom Hunt, president and CEO of WindSpring, spoke to PD&D about how it works and how to address compression and connectivity while saving money when using the IoT in a company’s M2M infrastructure.

WindSpring is grounded in the automobile navigation business, and now holds six patents on compression techniques.

“When we look at IoT we see an amazing ramp up of sensors and devices with not a lot of standardization going on in terms of protocols and interfaces,” Hunt said. Companies in industries such as agriculture or healthcare are growing rapidly and using connected devices for the first time. Because these companies aren’t necessarily using M2M communication of their own design, they’re constrained in terms of memory, storage, and compute power by their device provider.

Since devices are limited in how much they send, they tend to send lots of short messages very frequently (every minute, every hour, every time the machine moves, etc.). Companies may still be using 2G networks or transitioning from 3G to 4G. IoT can be both expensive and limiting in these cases.

In order to combat this, SpringBoard uses compression and makes connections between similar protocols. 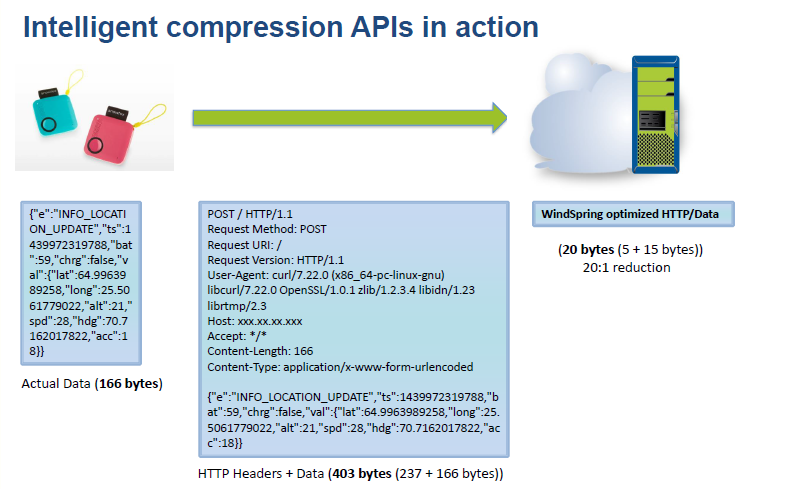 WindSpring’s compression technology has been “reinvented” in order to work with IoT, Hunt said. Using an optimized, proprietary protocol, data from an IoT device is compacted to reduce the amount of data. Customers want to be able to use just 1 to 2 MB per month instead of 25 to 30, and SpringBoard can reduce message sizes by a factor of 11, changing a sample message from 403 bytes to 20.

They also use an A2A (any-to-any) protocol connector to automatically translate between different protocols, including HTTP, Artik, HomeKit, and WindSpring’s A2A protocol. It’s compression-aware, so that if it needs to communicate from a server running CoAP to a server expecting to see HTTP it can either be decompressed first or pass through completely compressed. This runs along with the intelligent compression APIs in WindSpring’s IoT tool suite.

Most of the time, companies reach out to WindSpring after they have found it difficult to manage their own data. For example, one smart meter company reached out to WindSpring in order to cut down on the amount of data they consumed. They needed to use 400 MB per day per device. With WindSpring, they could use under 300 bytes of memory on 2k of physical storage, a 10:1 reduction in data.

“If we can lower the barrier for retail then we can get them into a solution that works. If we can make smart meters with no memory work, then we’ve lowered the cost of energy in a smart meter deployment,” Hunt said.