Aergility has spent years testing a vertical take-off and landing aircraft (VTOL) called ATLIS, according to New Atlas. The autonomous delivery drone has no wings, but is designed to fly at 100 mph for hundreds of miles on one tank of gas. This gas efficiency comes from its proprietary lift and control system known as managed autorotation.

The drone contains eight electric rotors that help its lift and a gas-powered device at the rear for speed.

Jim Vander Mey, Founder and CEO of Aergility, told General Aviation News that the drone uses flight controller to manage the revs of the rotors. This lift happens by powering up all the rotors at one time and selecting only certain rotors to slow down and speed up. Regen braking helps with the energy that is expended when it lands and takes-off.

Certain parts of the unmanned aerial vehicle (UAV) will be made of carbon fiber, such as the housing, struts and rotor arms. The design shows the rotor arm assembly folding for transport and a payload that is loaded onto a platform underneath the drone. Their current objective is to develop the UAV for long range cargo transport for aerial survey, disaster relief and crop spraying.

The project is now moving onto the stage of creating a full-scale prototype which will take approximately one year to build. 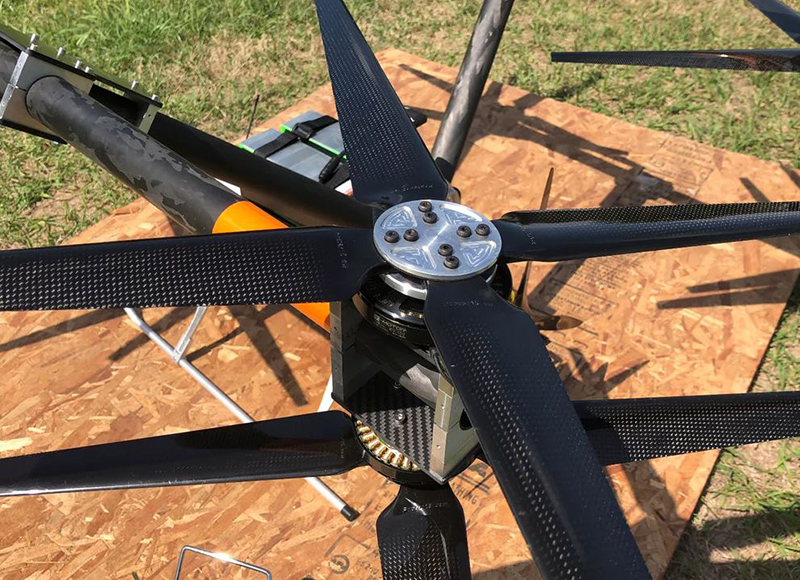 Close up of one of the twin rotor arms of the ATLIS quarter scale prototype. Credit: Watts Innovations