I love sleep, but are you ready to get some shut-eye in a suspended, robotically weaved, carbon fiber hammock?

Maria Yablonina, a graduate from the University of Stuttgart, and the Institute for Computational Design (ICD) have devised a new, tech-savvy way to build structures. The project, formally referred to as The Mobile Robotic Fabrication System for Filament Structures, showcases two pint-sized robots weaving carbon fibers to create a functional, comfy hammock.

Instead of using one or two mechanical behemoths to aid in construction, Yablonina enlisted the help of wall-climbing mini robots. The use of smaller robots offers a potentially cheaper option, while also demonstrating a robotic collaborative effort. The project calls this fabrication method a form of “swarm construction,” where the robots swarm together to get the work done. Go team! 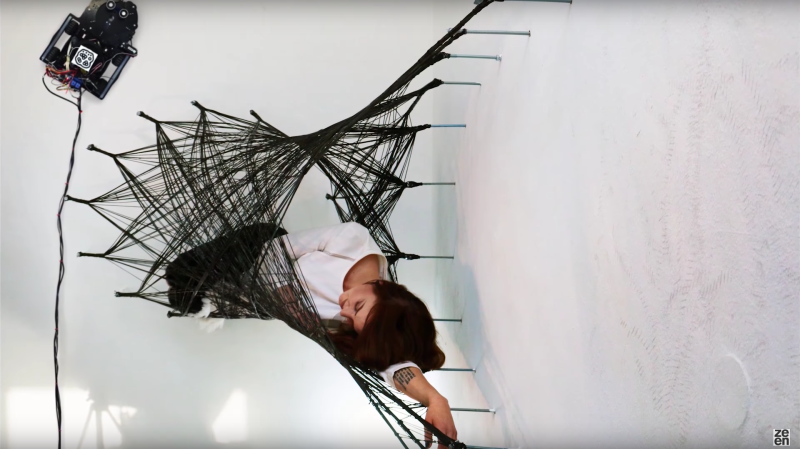 The small robots scale walls and zoom across ceilings. As the machines scamper up and down various structures, they pull fiber filaments across the entire area, creating a completely new architectural design. Along with their increased mechanical agility, the robots utilize sensors and suction functionality which allows them to move vertically and horizontally across a surface.

The robots work in tandem as they stretch threads of carbon fiber, securing them to large bobbins protruding from the walls. The finished project looks like an eerie, intricate spider web disguised as a comfortable hammock. This will definitely be an interesting place to have a pleasant afternoon nap.

As of right now, the robots need to be linked to an external power source by means of a cable. This somewhat limits their architectural application, but the team looks to upgrade this hindrance in the future. The designers also aim to improve the complexity of the finished architectural product.

Watch these mini robots build the cozy hammock in the video below.