Although it opened in 2011, YOTEL New York feels like it belongs in 2084, the same year the science-fiction film Total Recall is set.

One could easily imagine Quaid staying at a Martian outpost of YOTEL, a “minimal-service” hotel modeled after Japanese capsule hotels, which provide a large number of extremely small modular guest rooms for travelers willing to forgo all the services of a conventional hotel in exchange for convenient, affordable accommodations. These kinds of automated-service hotels may be a trend into the 2020s, but are they really hotels of the future?

Located in Hell’s Kitchen near Times Square, YOTEL’s flagship property has 669 “cabins” spread across 60 floors, each cabin with a futon-style bed occupying most of its scant square footage. It has an ultracontemporary all-white design that glows radioactively with neon-purple mood lighting; automated check-in via self-service kiosks; and YOBOT, a robotic baggage handler that stores and retrieves guests’ luggage.

When most people stay at YOTEL, they believe they’re witnessing one of the hotels of the future. But when Ron Swidler, principal of branding at Chicago-based hospitality design firm The Gettys Group, stayed there, he saw something else entirely. To start with, no one was actually using the YOBOT; although it looked cool, it felt more like a gimmick than a service. That was also the case with automated check-in, which failed when his kiosk encountered a software error. And in the two days Swidler stayed at the hotel, he never came in contact with a person working there.

“Here I was in an environment that was meant to be representative of a leading-edge hotel experience, but it was missing an important component: hospitality,” Swidler says. “The future of technology and the role it plays in hospitality should allow for personalization and customization that combines computing power. What we need to consider is how can we use technology to enhance the guest experience while still allowing for a human connection.” 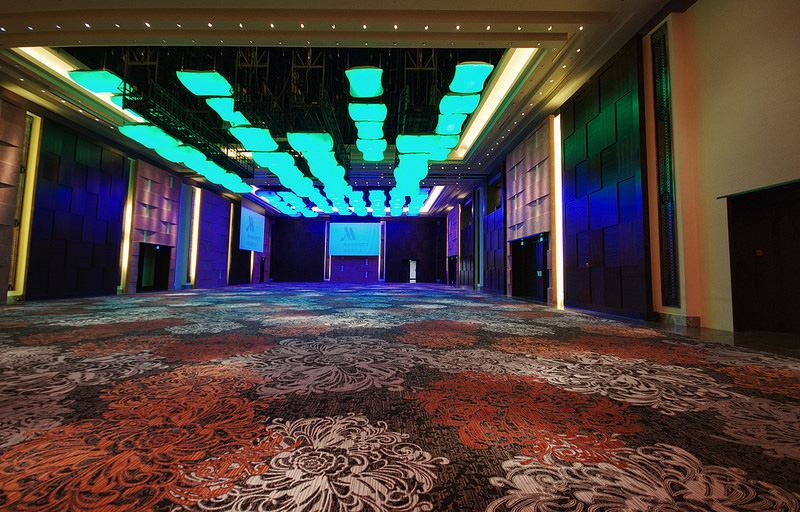 The ”pillow” lights in the Marriott Manila grand ballroom. Courtesy The Gettys Group.

In 2015, The Gettys Group designed the AC Hotel Chicago Downtown, which features wireless service buttons called “Kallpods” that guests can use to easily summon a staff member when they need service; the grand ballroom at the Marriott Manila, with its 176 programmable “pillow” lights in the ceiling that can change to any of 360 different colors to match the moods of meetings and events; and The Godfrey Hotel Boston, where guests can use their personal mobile devices to stream photos, videos, and music directly to their rooms’ 55-inch televisions. (All three hotels were designed using Autodesk AutoCAD Architecture.)

He’s not alone. Although novelty lodgings like YOTEL will continue to open on the premise that technology is an end, not a means—Japan, for example, recently opened the Henn-na hotel, the world’s first hotel staffed entirely by robots—many hotel designers are laser-focused on integrating technology and hospitality in ways that amplify service instead of merely automating it. 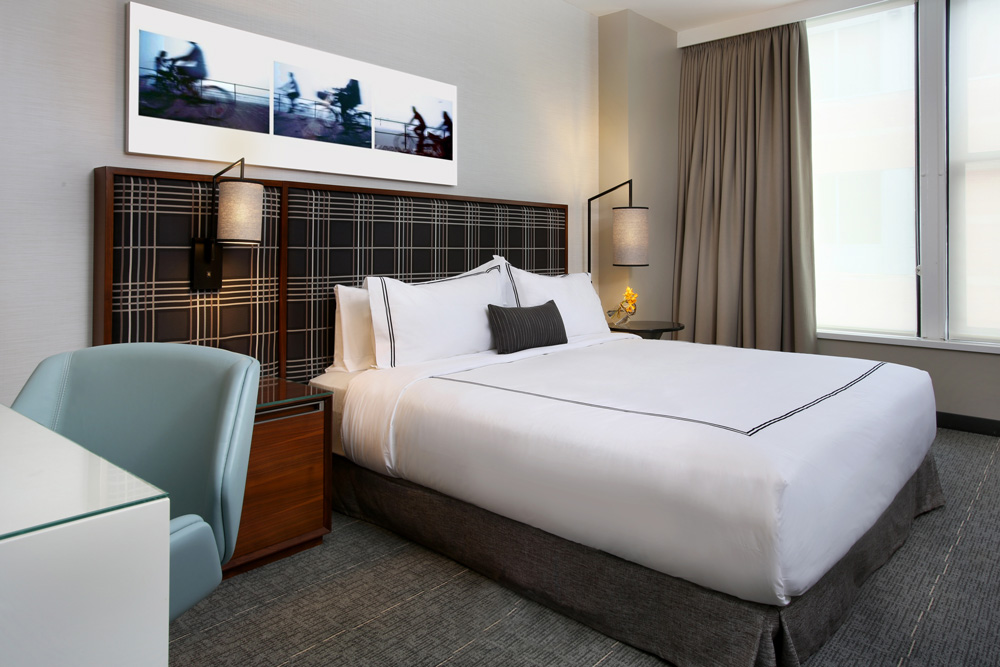 A room at The Godfrey Hotel Boston. Courtesy The Gettys Group.

“If you spend a lot of time reading TripAdvisor reviews like I do, you know that aesthetics rarely get mentioned as a driver for someone’s stay,” Swidler says. “Instead, comments primarily focus on service. So if you look at guest expectations of design, it’s design of an overall experience, and a hotel’s differentiation is the delivery of that experience.”

Highlights include a four-story LED board atop the building that displays a digital clock over the surrounding Garment District; an elevator bank showcasing digital imagery timed to change with the opening and closing of the elevator doors; and a “digital tapestry” that leverages reflective wallpaper, motion detectors, projectors, and 3D cameras to capture and project data and movement occurring in the surrounding corridor. A dynamic patchwork of digital artwork that spans the length of an entire city block between the hotel’s main and satellite entrances, the tapestry morphs in response to human movement and touch. 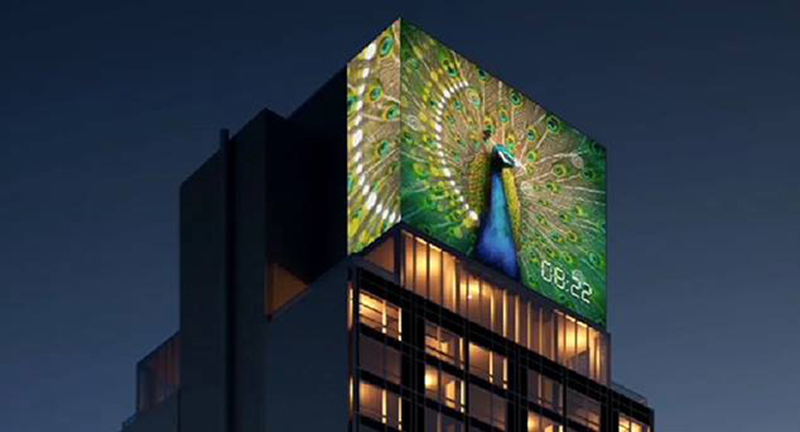 The tapestry’s centerpiece is the Discovery Portal, a digital alcove with hologram projections on the floor and a large screen on the wall. When guests stand on various holograms, they activate content on the screen that helps them explore the area around them: Standing on one hologram, for instance, will unfurl a menu of attractions located within a 10-minute walk of the hotel; standing on another will reveal nearby attractions that are open at night. For more information, guests need only raise their arm and point at the desired content on the screen.

“Every time they come to our hotel, we want guests to experience something they haven’t experienced before,” explains Renaissance New York Midtown General Manager David DiFalco. “Technology is a catalyst for that.”

The Discovery Portal doesn’t replace traditional human concierges; rather, it supplements them, as guests who desire personalized recommendations and a human touch can visit the sixth-floor lobby to consult the hotel’s “Navigators”—in-the-know neighborhood experts trained to make recommendations for restaurants, bars, and attractions that only locals would know. 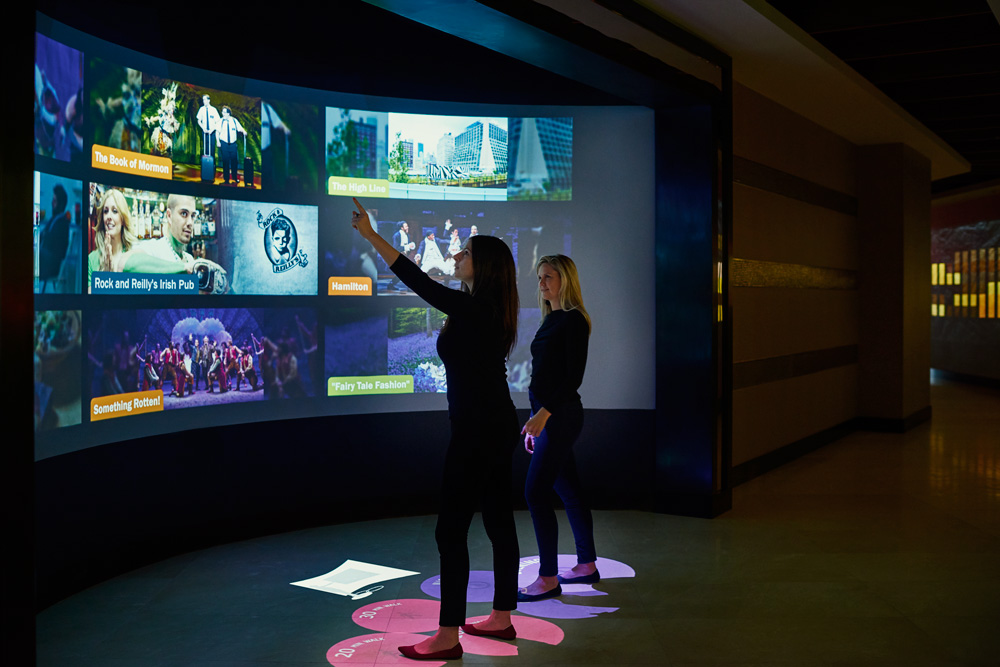 “On the one hand, you’ve got the technology that makes you feel like you’re in an advanced, brand-new property with a lot of great features in it,” DiFalco says. “But at the same time, there’s not so much technology that it prevents you from interacting with staff. Because our people are always the most important asset we possess inside our hotel. It doesn’t matter how cool your technology is or how nice your design is; if you don’t have good people taking care of your guests, they’re not going to come back.”

Whether talking about Discovery Portals, YOBOTs, or any number of emergent hospitality technologies—such as beacons, keyless room entry, or in-room virtual reality—the negotiation between high-tech and high-touch service is constant.

“While a lot of technology has great PR value, we don’t know yet whether there will be guest satisfaction that comes as a result of its integration,” Swidler concludes. “So anything more than the most conservative solutions takes a leap of faith.”

This blog originally appeared on lineshapespace.com/hotels-of-the-future.