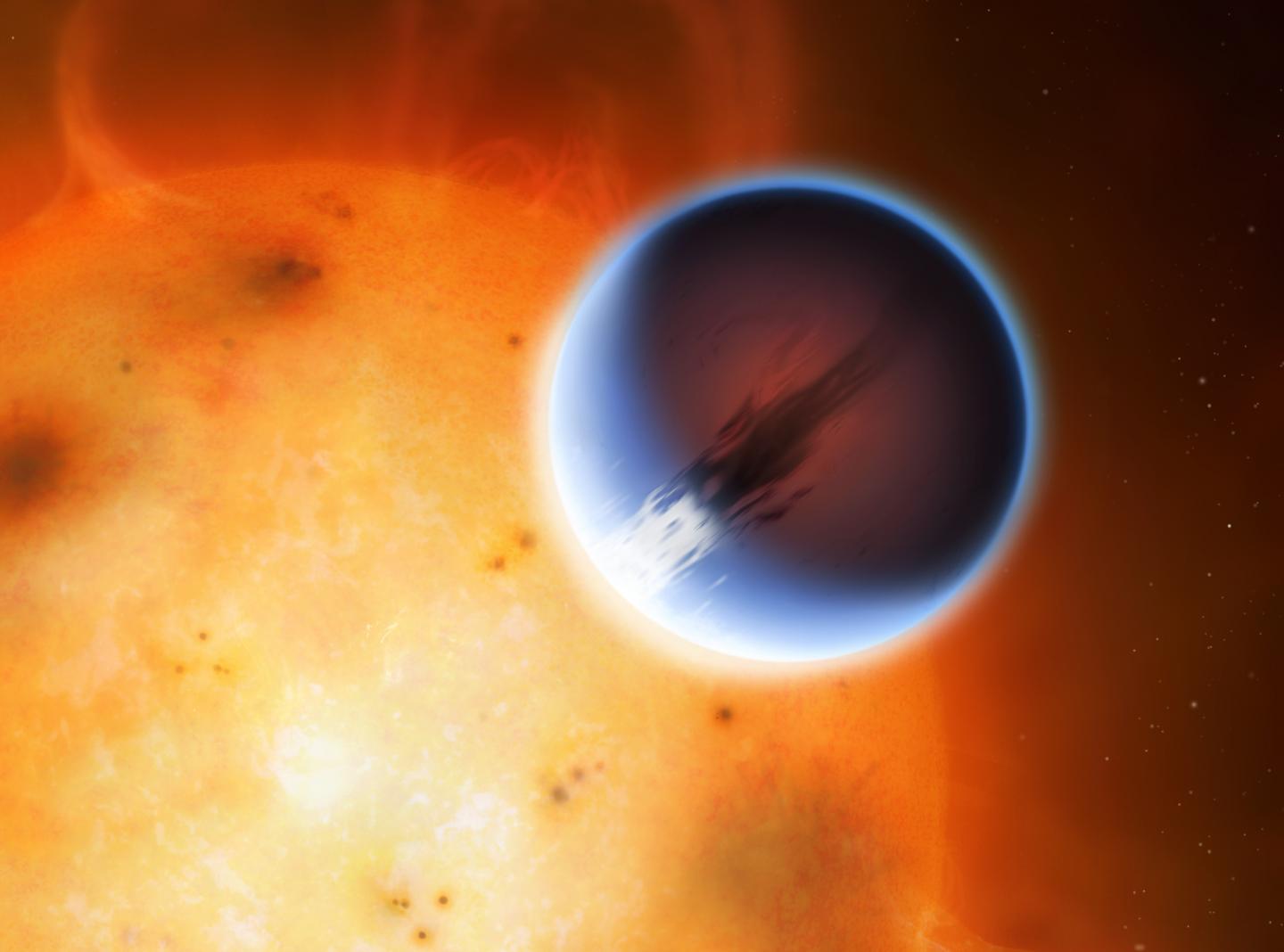 The planet HD 189733b is shown here in front of its parent star. A belt of wind around the equator of the planet travels at 5400mph from the heated day side to the night side. The day side of the planet appears blue due to scattering of light from silicate haze in the atmosphere. The night side of the planet glows a deep red due to its high temperature. Credit Mark A. Garlick/University of Warwick

Winds of over 2km per second have been discovered flowing around planet outside of the Earth’s solar system, new research has found.

The University of Warwick discovery is the first time that a weather system on a planet outside of Earth’s solar system has been directly measured and mapped.

The wind speed recorded is 20x greater than the fastest ever known on earth, where it would be seven times the speed of sound.

Commenting on the discovery lead researcher Tom Louden, of the University of Warwick’s Astrophysics group, said:

“This is the first ever weather map from outside of our solar system. Whilst we have previously known of wind on exoplanets, we have never before been able to directly measure and map a weather system.”

Discovered on the exoplanet HD 189733b, the Warwick researchers measured the velocities on the two sides of HD 189733b and found a strong wing moving at over 5400mph blowing from its dayside to its night side. Mr Louden explains:

“HD 189733b’s velocity was measured using high resolution spectroscopy of the Sodium absorption featured in its atmosphere. As parts of HD 189733b’s atmosphere move towards or away from the Earth the Doppler effect changes the wavelength of this feature, which allows the velocity to be measured”.

Explaining how this information was used to measure velocity Mr Louden says:

“The surface of the star is brighter at the centre than it is at the edge, so as the planet moves in front of the star the relative amount of light blocked by different parts of the atmosphere changes. For the first time we’ve used this information to measure the velocities on opposite sides of the planet independently, which gives us our velocity map.”

The researchers say that the techniques used could help the study of Earth-like planets. Co-researcher, Dr Peter Wheatley of the University of Warwick’s Astrophysics Group explains:

“We are tremendously excited to have found a way to map weather systems on distant planets. As we develop the technique further we will be able to study wind flows in increasing detail and make weather maps of smaller planets. Ultimately this technique will allow us to image the weather systems on Earth-like planets. “

HD 189733b is one of the most studied of a class of planets known as ‘Hot Jupiters’. At over 10% larger than Jupiter, but 180x closer to its star, HD 189733b has a temperature of 1800’C. Its size and relatively closeness to our solar system make it a popular target for astronomers. Past research has shown that the day side of the planet would appear a bright shade of blue to the human eye, probably due to clouds of silicate particles high in its atmosphere.