ACE Controls Inc., known for developing the world’s first adjustable shock absorber and many other innovations, recently celebrated their 50th anniversary with a reception that included their distributor base as well as their employees. In their first half century, ACE’s products have optimized technology, allowing production speed and efficiency to increase. Today ACE continues to develop new products and increase plant capacities, including gas spring production. 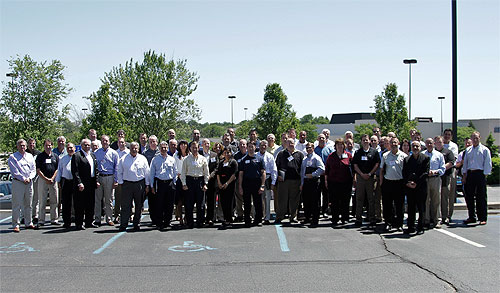 Automation Control Equipment (ACE) Controls was incorporated in 1963 by William J. Chorkey, Alice Chorkey and Larry Ellis. The company was born in the basement of the Chorkey’s home in a suburb of Detroit, MI while Mr. Chorkey commuted to Chicago, IL every week for his full-time job. The company quickly grew to demand his full attention, and operations were moved to a Quonset hut in Farmington Hills, MI.

“ACE Controls has always been a huge part of my whole family’s lives. We were all very proud of the world-changing adjustable shock absorber my father developed in our basement, and thrilled to be a part of the company that grew from it,” said Lorraine Chorkey, Mr. and Mrs. Chorkey’s oldest child.

In 1964 ACE introduced and patented the first adjustable shock absorber. The first application of the adjustable shock was at Fisher Body. They were manufacturing bumpers on a line that included molding metal into a bumper. Each bumper moved from one machine into another as it was being formed, and when they tried to increase production even slightly, the bumper flew off causing a lot of damage. ACE’s shock absorber allowed production to increase far more than originally planned.

Just two years later Mr. Chorkey attended the London Fluid Power show where he realized that ACE’s technology would make them an industry leader in Europe, and by the early 1970s the first ACE facility was established in Newton-le-Willows, England. Soon after, Mr. Chorkey became the director of the National Fluid Power Association, and another ACE facility was established in Germany. In 1978 ACE acquired Flairline and started Fluid Machine.

The 80’s proved to be another busy decade for ACE, with the development of rolling-seal technology and the introduction of the MC 150/225/600 series. Mr. and Mrs. Chorkey gained complete ownership of ACE before they expanded into the Asian market with a facility in Tokyo. A highlight of the company’s history was when Mr. Chorkey received the President’s “E” Award in 1984.

In the mid 90s, after the introduction of two new product lines, gaining ISO 9001 certification and the establishment of Valves Inc., Mr. and Mrs. Chorkey’s seven children began to lead ACE. In 1998 William J. Chorkey stepped down and Bill Chorkey was elected president. ACE released the Magnum Group product line in 1998 and in 2000 the piston tube was designed and patented.

ACE Controls was acquired by Kaydon Corporation (NYSE: KDN) in 2001, and the new millennium saw expansions into India and China, more acquisitions and more product innovations, including the smallest shock absorber in history, the MC5. The MC5 is used in microchip and semiconductor production. Bill Chorkey retired in 2011 after showing the ropes to Gary Brewer, who is currently the president. “ACE has always been a very good engineering company, but now they are becoming a good marketing and support company,” said Russell Church of Southwestern Controls, one of ACE’s distributors.

Today, ACE and their network of distributors serve the automotive, special machinery, construction, mining, fluid power, automation, electronic equipment, energy, paper and pulp industries. They produce over 800,000 units a year, with over 75 distinct product lines and hundreds of variations for each model. ACE products are in use everywhere from deep sea mining and research to outer space. “The ACE product helps improve the efficiency, reliability and performance of fluid power systems, in motion control where you have vibration and you need to decelerate loads,” said Henry Testa of Exotic Automation & Supply, another ACE distributor.

With a renewed focus on customer service, including sales support from application engineers, and growth in the vibration isolation market, everyone at ACE is looking forward to continued success in the future. “We’ve added a great deal of infrastructure: from a marketing perspective, we’ve added field sales, we have new product in development, so we’re well positioned for continued growth in the Americas, China and Europe,” Gary Brewer said. “And, we’ve changed our business model to be more customer-focused.”