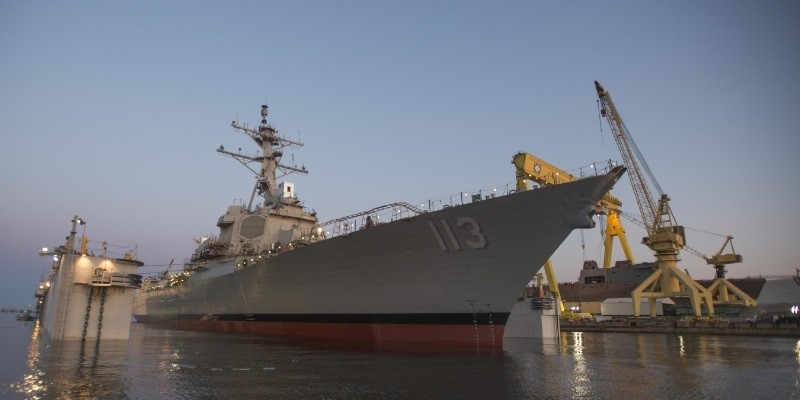 The latest improvement to the Aegis Combat System, Baseline 9.C1, has been was certified for the U.S. Destroyer fleet. This evolution will one day involve the USS USS John Finn, which is shown hear during construction. (Image: Lockheed Martin)

The United States Navy and Missile Defense Agency (MDA) have certified the latest update of the Aegis Combat System for the military’s destroyer fleet.

The upgrade, known as Baseline 9.C1 was built by Lockheed Martin. Due to the changes, the destroyer fleet’s defensive capabilities will be improved, and it will be easier to assimilate the fleet with other systems.

Baseline 9.C1 features the BMD 5.0 Capability Upgrade, which helps destroyers to incapacitate ballistic missiles located in both the upper and lower atmosphere.

Though the certification was just announced on Monday, the Navy and MDA put the BMD upgrades through a multi- phased examination period, known as Multi-Mission Warfare (MMW) testing, during the summer of 2015. According to Lockheed Martin, the Aegis baseline “flawlessly detected, tracked, and engaged two Ballistic Missile and two air warfare targets” during the event, which took place aboard the USS John Paul Jones.

The Lockheed Martin-developed Aegis BMD Combat System’s most important feature is the SPY-1 radar, which has been equipped on more than 100 ships. The baseline 9.C1 improved both the radar resolution and discrimination abilities of the SPY-1 radar.