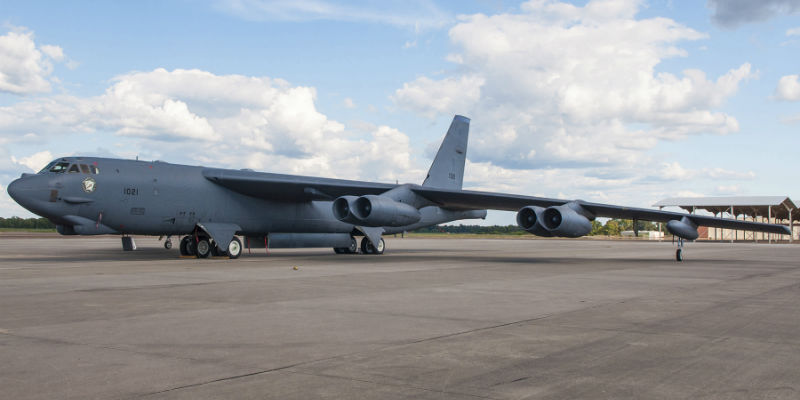 A B-52H Stratofortress assigned to the Air Force Reserve Command’s 307th Bomb Wing is the first B-52H bomber to be converted as part of the New START Treaty.

U.S. efforts to support the treaty include the conversion of 30 operational and 12 non-operational B-52s to a conventional-only configuration across the Air Force that will be completed by early 2017. (U.S. Air Force photo/Master Sgt. Dachelle Melville)

Air Force Global Strike Command has begun the conversion of a portion of the B-52H bomber fleet from a nuclear to a conventional only capability aircraft under the New Strategic Arms Reduction Treaty (New START).

The conversion of the first of 30 operational aircraft from across the command was completed at Barksdale Air Force Base, Louisiana, this summer with the Air Force Reserve Command 307th Bomb Wing’s aircraft 61-1021. The conversion process preserves the full conventional capabilities of the B-52.

The Air Force will also convert 12 non-operational B-52H aircraft currently maintained in storage at the 309th Aerospace Maintenance and Regeneration Group in Tucson, Arizona. The Air Force is scheduled to complete all conversions by early 2017.

Under New START, the U.S. and Russian Federation are required to have no more than 1,550 deployed warheads; 800 deployed and non-deployed intercontinental ballistic missile launchers, submarine-launched ballistic missile launchers and nuclear capable heavy bombers; and 700 deployed ICBMs, SLBMs and nuclear capable heavy bombers. AFGSC also began the transition of 50 Minuteman III launch facilities across the command to an operational non-deployed status in May 2015.

The Department of Defense announced its force structure in April 2014 to comply with New START requirements. The treaty-compliant force structure allows the Air Force to continue providing the nation with safe, secure and effective deterrent forces.