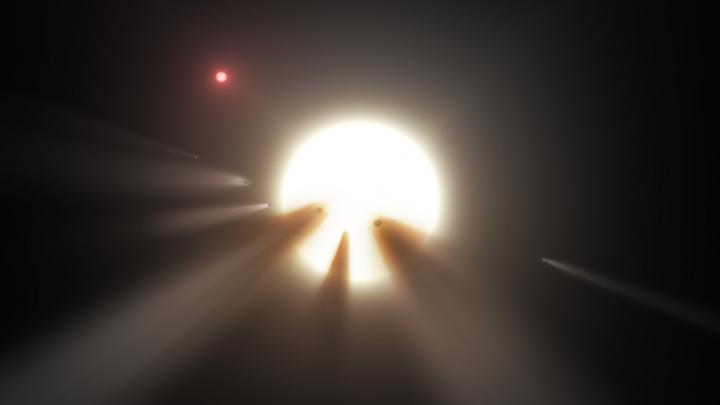 This illustration shows a star behind a shattered comet. Observations of the star KIC 8462852 by NASA’s Kepler and Spitzer space telescopes suggest that its unusual light signals are likely from dusty comet fragments, which blocked the light of the star as they passed in front of it in 2011 and 2013. The comets are thought to be traveling around the star in a very long, eccentric orbit. Credit Illustration by NASA/JPL-Caltech.

Was it a catastrophic collision in the star’s asteroid belt? A giant impact that disrupted a nearby planet? A dusty cloud of rock and debris? A family of comets breaking apart? Or was it alien megastructures built to harvest the star’s energy?

Just what caused the mysterious dimming of star KIC 8462852?

Massimo Marengo, an Iowa State University associate professor of physics and astronomy, wondered when he saw all the buzz about the mysterious star found by citizen scientists on the Planet Hunters website.

Those citizen scientists were highlighting measurements of star brightness recorded by NASA’s Kepler spacecraft. Tiny dips in a star’s brightness can indicate a planet is passing in front of the star. That’s how Kepler astronomers – and citizen scientists using the internet to help analyze the light curves of stars – are looking for planets.

But this star had deep dips in brightness – up to 22 percent. The star’s brightness also changed irregularly, sometimes for days and even months at a time. A search of the 150,000-plus stars in Kepler’s database found nothing like this.

So Marengo and two other astronomers decided to take a close look at the star using data taken with the Infrared Array Camera of NASA’s Spitzer Space Telescope. They report their findings in a paper recently published online by The Astrophysical Journal Letters.

“The scenario in which the dimming in the KIC 8462852 light curve were caused by the destruction of a family of comets remains the preferred explanation …,” wrote the three – Marengo; Alan Hulsebus, an Iowa State doctoral student; and Sarah Willis, a former Iowa State graduate student now with the Massachusetts Institute of Technology’s Lincoln Laboratory.

Questions about the star were launched last month when a research team led by Tabetha Boyajian of Yale University reported on the star in the Monthly Notices of the Royal Astronomical Society. The astronomers reported how citizen scientists tagged the star’s deep and irregular dips in brightness as “bizarre” and “interesting.”

Boyajian and the other researchers looked at the data and investigated several possible causes. They wrote the “most promising theory” was a barrage of crumbling comets passing in front of the star.

In a subsequent paper submitted to The Astrophysical Journal, Jason Wright and colleagues at Penn State University speculated about other causes, including alien megastructures built to harvest energy while orbiting the star.

When the Iowa State astronomers studied the star with Spitzer infrared data from January 2015 – two years after the Kepler measurements – Marengo said they didn’t see much. If there had been some kind of catastrophe near the star, he said there would be a lot of dust and debris. And that would show up as extra infrared emissions.

Marengo said the study looked at two different infrared wavelengths: the shorter was consistent with a typical star and the longer showed some infrared emissions, but not enough to reach a detection threshold. The astronomers concluded there were no excess infrared emissions and therefore no sign of an asteroid belt collision, a giant impact on a planet or a dusty cloud of rock and debris.

So Marengo and his colleagues say the destruction of a family of comets near the star is the most likely explanation for the mysterious dimming. The comet fragments coming in rapidly at a steep, elliptical orbit could create a big debris cloud that could dim the star. Then the cloud would move off, restoring the star’s brightness and leaving no trace of excess infrared light.

And the alien megastructure theory?

“We didn’t look for that,” Marengo said. “We can’t really say it is, or is not. But what the star is doing is very strange. It’s interesting when you have phenomena like that – typically it means there’s some new physical explanation or a new concept to be discovered.”