The Department of Defense COTS initiative is an admirable goal that’s proven its ability to save money and reduce delivery time, while still meeting defense systems requirements. The challenge for designers is determining whether a specific commercial component is acceptable for defense service. This conundrum is also applicable to Ethernet cables and connectors, although tests have shown the commercial variety can meet an untimely end. Fortunately, manufacturers have ruggedized Ethernet cables and connectors using a variety of techniques, so it’s important to understand them before making a decision.

Ethernet is increasing its presence in defense systems (Figure 1) for the same reasons it is ubiquitous elsewhere: a 37-year record of continuing advancement, inherent interoperability that fosters modularity, the ability to eliminate a power cable through Power over Ethernet (PoE), support for both copper and optical fiber, and a huge base of suppliers, to name a few. These benefits and others are making Ethernet the “go-to” data communications solution for use in many types of defense platforms.

Figure 1: The Army’s Warfighter Information Network-Tactical (WIN-T) relies on the performance of Ethernet for its role in acting as a comprehensive platform for distributing intelligence, surveillance, and reconnaissance information including voice, data, and real-time video. (Image Source: U.S. Army)

That said, ground and sea-based systems can expose Ethernet cables and connectors to extreme cold, blistering heat, salt spray, and chemicals, along with being run over by trucks used to drag around equipment racks and other rough treatment. Airborne platforms have their own unique demands. Other considerations include the possible need for low smoke zero halogen (LSZH)-rated cables. In addition, Ethernet’s continuous upward spiral in performance is countered by the rapid advances in optical, RF, and microwave sensors that generate massive amounts of data and need extremely high throughput.

The first step in specifying ruggedized Ethernet cable is a thorough evaluation of the conditions to which it will be subjected. This includes environmental factors like minimum and maximum temperatures, exposure to corrosive or other hazardous chemicals, resistance to shock and vibration, frequent connection and reconnection, and others dictated by the application.

Another major issue increasing in severity is the presence of unwanted signals and extraneous electrical noise, which is a concern in any environment, but worse in aircraft where large amounts of electronic equipment is close together. Ensuring the electrical performance of Ethernet cables and connectors is not degraded by low and high-frequency electromagnetic energy and crosstalk is thus essential.

The degree to which this can be achieved depends on the performance of shielding within the cable, between cable and connector, and connector interface. The requirements of many applications can be satisfied with cables using foil shielding, but when cables are used in the presence of high-power RF and microwave signals, the highest shielding effectiveness is needed through a combination of both foil and braid. Manufacturers developed proprietary techniques for achieving high shielding effectiveness, so it’s important to review their offerings.

Ethernet cables and connectors used in defense systems need not be in battlefield conditions to experience extreme environments, as they’re deployed throughout the world from deserts to the arctic. Low temperatures cause commercial cables to become stiff and brittle, while extremely high temperatures can cause softening and melting. Even quality industrial-grade cables with rated performance of 0° C to +60° C will experience degradation, but ruggedized cables typically rated for -40° C to +85° C or greater should withstand both conditions.

In addition, the variety of substances to which these cables can be exposed ranges from oil and cleaning solvents to various other chemicals, some of which can degrade or even destroy cable jackets not designed to resist their effects. If they penetrate the jacket, materials beneath it are exposed, and failure is soon to follow.

To address these problems, ruggedized cables have one or more layers of damage-resistant material, including fluorinated ethylene propylene (FEP) for high temperature environments or where gas is present to polyvinyl chloride (PVC). To resist moisture intrusion, multiple layers of polyethylene and water-resistant chemicals integrated within the materials and a chlorinated polyethylene (CPE) outer jacket can provide protection.

Although more common in Europe, LSZH materials have more recently come into widespread use in North America, and are being incorporated within building codes. The call for LSZH cable jackets and conduit came in response to the fact that PVC when exposed to fire releases toxic gases called halogens. LSZH-rated cables virtually eliminate these gases, while also reducing the spread of flame. In addition to commercial use, they’re frequently being specified for use in military platforms, a trend that’s almost certain to accelerate.

How best to meet the requirements for fire resistance (how fast a cable burns), smoke density (the quantity of smoke they produce), and toxicity (the potential effect on humans from the smoke), was an issue for years that pitted “halogen-free” supporters against major manufacturers of traditional cable and conduit materials. The latter argued that current materials ignited at much higher temperatures than those proposed to make cables halogen-free, making them “safer.” Even today, European and U.S. standards differ, but over the years, halogen-free community has gained momentum. Nevertheless, it’s important to become familiar with this issue when considering cables for defense applications.

Aircraft and their operating environments place unique demands on all types of cables, and are a prime example of where ruggedized cables should be used. Their restricted space makes cable routing and installation difficult, while the installation process can cause a variety of maladies including severe bending, distortion, and abrasion. This can happen again if a cable bundle must be disturbed during maintenance.

Aircraft operation produces stresses caused by vibration, flexing, extreme bends, along with rapid temperature cycling and abrasion resulting from rubbing against the airframe. As Ethernet cables are invariably bundled with other electrical cables, EMI and RFI are major concerns. In short, military aircraft pose major challenges for Ethernet cables and connectors that can only be satisfied by ruggedized versions.

Interconnects used in defense systems must comply with different specifications than those governing commercial interconnects. They must meet requirements of military standards including MIL-DTL-38999, ARINC 600, and others. A variety of connectors are available from manufacturers that are designed exclusively for military applications, including those with controlled-impedance contacts that can accommodate single or multiple twin-axial cables.

These connectors are also heavily shielded against EMI and RFI, combine different signals within a single connector, and can withstand thousands of plug-and-unplug operations without failure. IP67-rated connectors are well suited for use in very wet areas, and where vibration or abrasion could cause deterioration.

The M12 Ethernet connector, a 4-pin type for Cat 5e cable (Figure 2), is well suited for military applications, especially in aircraft where space is at a premium. These connectors have a 12-mm locking thread that can be specified to meet IP65, IP68, and IP69K even though they’re very compact. The connectors are available in several variations depending on their intended data rates, and can be an excellent alternative to RJ-45 connectors in platforms subjected to shock and vibration. 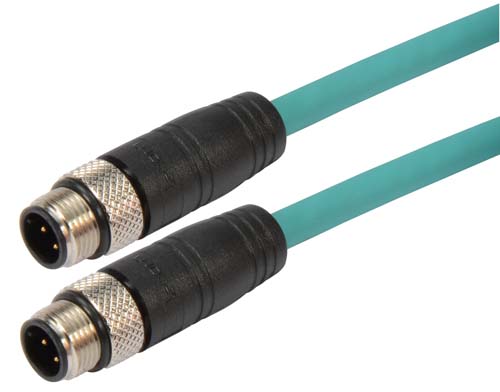 The defense operating environment bears little resemblance to its commercial counterparts, surpassing even industrial and automotive applications in the severity to which its hardware is exposed. As a result, there are few defense scenarios that are suitable for commercial-grade Ethernet cables and connectors, even where the system will never experience combat.

These environmental challenges combined with the proliferation of high-resolution optical sensors and broadband electronic warfare, radar, and communications systems pose difficult choices for designers. So, although less-expensive COTS hardware may be appealing, a safer choice is typically to choose ruggedized Ethernet cables and connectors specifically designed to meet the most demanding requirements.