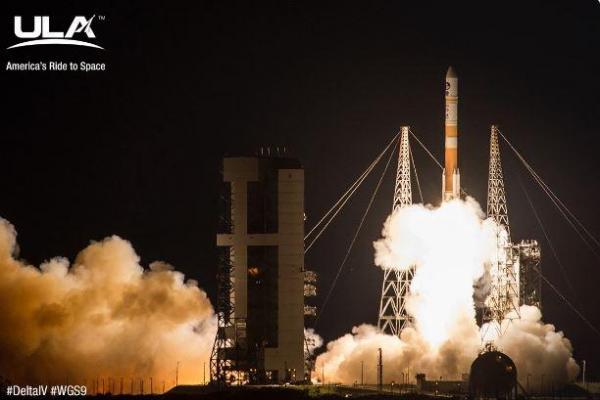 A Delta IV rocket, carrying a $445 million U.S. military satellite, blasted off from Cape Canaveral, Fla., on Saturday night after a 34-minute delay.

The 22-story rocket, built and flown by United Launch Alliance, took off at from Launch Complex 37 at 8:18 p.m. EDT on Saturday, powered by a thrust of 1.7 million pounds. The delay was due to a problem with ULA ground support equipment. ULA is a partnership between Lockheed Martin Corp and Boeing Co.

The satellite is positioned 22,000 miles above the equator. The 10th and final satellite is targeted to launch in late 2018.

The WGS network serves military communications on ships and aircraft, as well as the Department of State, the White House and select partners worldwide.

In exchange for part-time use of the WGS network, four countries — Canada, Denmark, Luxembourg, the Netherlands and New Zealand — paid for the $442 million cost to manufacture WGS-9.

Australia paid for the WGS-6 spacecraft, which was launched in 2013.