Braces. The word triggers in me flashbacks of rolling balls of wax onto the wires to prevent the inside of my mouth from being torn open, or choosing which color rubber-bands I wanted to display each month (orange and black in October. Red and green in December. Red, white, and blue in July). I was one of the lucky adolescent ducks who got to don headgear while I slept.

The orthodontist’s office becomes a kind of second home during this coming-of-age period of a teenager’s life. Most teenagers, that is.

Amos Dudley, a 3D artist and New Jersey Institute of Technology student, has figured out how to create his own set of clear Invisalign braces after failing to wear his retainer, consequently causing his teeth to shift back into chaos. But being the broke (albeit, enterprising) college kid that he was, Amos decided to take matters into his own hands.

Kids, don’t try this at home.

First, Amos took a mold of his teeth, using alginate powder, and placed it into a yogurt container (oh college) filled with Permastone. He then scanned the casing, generating digital models for several sets of aligners—which he then 3D-printed.

As he documented on his blog: “Creating the animation was…fairly trivial—I separated the visible crowns of the teeth from the gumline, and then made a manifold model from each of the shells. I didn’t bother adjusting the geometry of the gums—they are soft. Then it was just a matter of animating them into their correct positions. I measured the total distance of travel, and divided it by the maximum recommended distance a tooth can travel per aligner.”

Fun fact numero dos: apparently you can buy retainer plastic on eBay. “The sale of dental supplies really isn’t tightly controlled,” Amos told Gizmodo. “Who wants them other than dentists?” 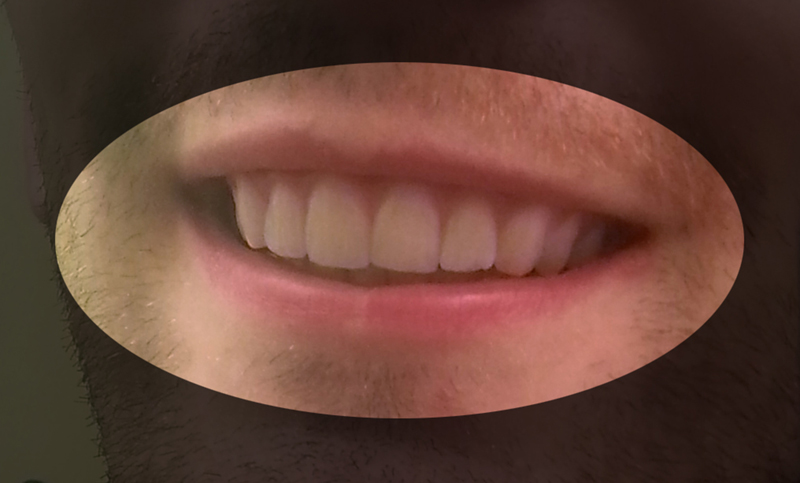 Amos admits that the aligners are more comfortable than braces. “I’ve been wearing them all day and all night for 16 weeks, only taking them out to eat. I’m planning on fabricating a bunch of retainers for the current position, which I can use—till I die—at night.”

Of course, because this process involves your face, actual dental professionals advise against this sort of Martha-Stewart-do-it-yourself-teeth-straightening business. Lots of other people have tried and failed (miserably) to fix their pearly whites. (Don’t Google this if you want to keep your lunch down).

Associate professor of orthodontics at the University of Minnesota School of Dentistry Brent Larson said: “I’m impressed with the way Amos was able to use the scanning and printing technology that he had available to engineer and produce his own aligners but a little frightened that he would actually use them to treat himself without a professional assessment of the health and function of the teeth.”

You don’t need to tell me twice. One of the most scarring movie scenes I’ve ever watched is from Castaway (you know, the Tom-Hanks-Wilson-volleyball-love-story), where Hanks’ character knocks out a rotting tooth using a giant rock and an ice skate blade. While Amos’ denture venture is incredibly impressive, I’m happy leaving my teeth to the professionals.