In the area of consumer electronics, multi-touch has not only changed the ergonomics of devices, it has changed user habits as well. In industrial automation, this technology has the potential to make machine operation more intuitive, faster and safer – in essence, to bring about a revolution in ergonomics for machine and system visualization units.

B&R has introduced its own multi-touch technology in the form of a sleek, 21.5″ Full HD Automation Panel, designed specifically for industrial environments. Its solid glass surface makes it easy to clean and offers the operator excellent haptic properties. 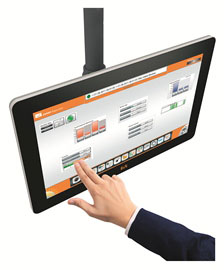 It promises a significant increase in usability by simplifying system operation while increasing the level of safety at the same time. Operations where one hand is used to open up a menu while the other sets parameters setting are definitely a possibility. This would eliminate the need to jump back and forth between sub-menus while increasing overall clarity in the application. The operator is able to get where he needs to go faster because complex menu layers can be eliminated. Handling lists would also be simplified since the operator could simply scroll through the content instead of having to rely on narrow scrollbars.

Implementing methods such as blocking certain actions until an additional button is pressed simultaneously with the other hand can also increase operational safety. Even if this doesn’t completely replace dead-man’s controls just yet, multi-touch operation used in this way can still prevent critical operating steps from being carried out unintentionally.