Sinumerik Operate combines the HMI-Advanced, ShopMill and ShopTurn operator and programming interfaces to create a single consistent user interface for use with machine tools.  The user interface contains animated elements and is designed to facilitate intuitive operation and programming.  Even the most complex workpieces can be setup with ease and produced in a single clamping operation, owing to a range of new functional features. 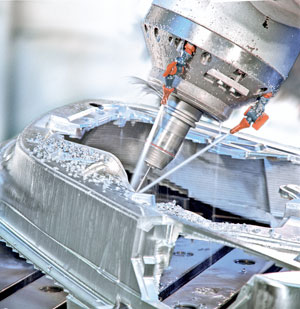 Sinumerik process measurement cycles are now also available for automatic workpiece and tool measurement processes with the familiar look-and-feel of Sinumerik Operate.  For these efficient cycles and other new functional features, the input masks are provided with animated elements using the Sinumerik high-level language programGuide and, with ShopMill and ShopTurn, they also include a simulation capability.  Measured values can be automatically updated and used both for tool correction and also zero offset.

The considerable user convenience of animated elements, which are designed to support machine operators with predictive graphic animation of operating and programming steps, will quickly establish the popularity of this application.  ShopMill’s programming functionality now also offers graphical support for features such as display of the rotary axis in position patterns, new pocket calculator functions with fit indication and the ability to hide selected positions in position patterns. Cylinder surface transformation and multiple workpiece clamping are also included in this new package.

Tool management within Sinumerik Operate has been expanded even further to include not only new grinding tool types, but also new measurement probe types and new depiction modes for tools using graphics and detailed picture views.  As a result, all turning, milling and grinding tools are displayed with the same familiar look-and-feel.  New shortcuts have also been introduced, such as the Ctrl-F function, allowing simplified search operations in most operating areas such as files, tools or in the editor, for substantially improved usability.

Program management is even more efficient by allowing PDF files or picture documents in .jpg, .png and .bmp formats to be saved in directories on local drives for paper-free production.

These improvements to the Sinumerik CNC’s user interface, as well as the new cycles and functionalities, are also available with the new version of the Sinumerik Operate-based training software SinuTrain.

Sinumerik MDynamics is technology package for milling applications.  Aimed at users of three- and five-axis milling machines, MDynamics combines the CNC hardware, smart CNC functions and the integral CAD/CAM/CNC process chain into a single usable package for industries that are required to comply with the highest standards of surface quality and precision, as well as machining speed. Sinumerik MDynamics is specifically geared to applications in industries such as automotive and aerospace, power generation, medical part production, shopfloor manufacturing and tool- and
mold-making.

Accurate surface machining and precise contouring are provided within the shortest possible machining times.  These are factors that significantly impact workpiece quality and manufacturing productivity.

The “Advanced Surface” path control system has been upgraded to further improve the quality and evenness of milling path velocity profiles and to reduce overall machining times.

An optimized look-ahead function offers users of Sinumerik CNCs particular benefits in terms of improved part quality and increased productivity for the high-speed cutting (HSC) of freeform surfaces.  Special emphasis was placed on the optimization and smoothing of any jerks that occur during the acceleration phase along adjacent milling paths.  As a result, the new look-ahead function improves the surface finish quality, despite increased machining speeds.

The “orientation path smoothing” (ORISON) function for five-axis machining helps eliminate the orientation fluctuations that occur over a number of blocks.  This helps to achieve a smooth characteristic for both the orientation and the contour, enabling more harmonious traversing of axes.  Sub-programs used in five-axis machining, which are generated by CAD/CAM systems, tend to include minor inconsistencies in the tool alignment movements determined by milling paths and direction vectors.  These lead to compensation movements by the rotary axes.  Even if these movements amount to just a few tenths of a degree, they can often bring about a temporary slow-down of tool movement or even a brief, but complete standstill of path traversing movements.  The result: visible traces on the workpiece surface, as well as increased machining time. 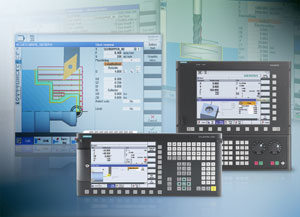 For various applications, such as face-end milling, the ORISON function smoothens the progression of changes to the orientation vector over several NC blocks, preventing any rapid or jerky changes to the tool alignment.  This results in fewer compensation movements that place less stress on the machine dynamics, leaving more dynamic capacity available for path tracking.  In the end, not only are circular axes less likely to be “slowed down” by stringent tolerance specifications, but there is also improved machining speed, surface quality and contour precision.

The new “Quick Viewer” function for mold-making applications offers a quick overview of the workpiece and the relevant sub-program.  Even the biggest NC programs can be converted in the shortest amount of time into a 3D workpiece preview.   The ability quickly obtain a graphical view of the mold-making program offers users enhanced security.  Not only does it provide the assurance of having selected the correct mold, but it also allows a rough appraisal of whether the program contains traversing errors and also of the fundamental machining strategy.