Approximately 345,000 or fewer chimpanzees remain in the wild, according to the International Union for the Conservation of Nature, a substantial decline from the more than two million that existed a hundred years ago. Humans’ closest genetic cousins, chimpanzees are an endangered species, and scientists and conservationists are turning to the NASA-U.S. Geological Survey Landsat satellites to help bolster their efforts to preserve their forest homes.

“Chimpanzees are in crisis,” said Lilian Pintea, a remote sensing specialist and vice president of conservation science for the Jane Goodall Institute, Vienna, Virginia, citing hunting and illegal bushmeat consumption, disease, illegal capture for the pet trade and habitat loss as the culprits.

Among these, habitat loss is visible from space. 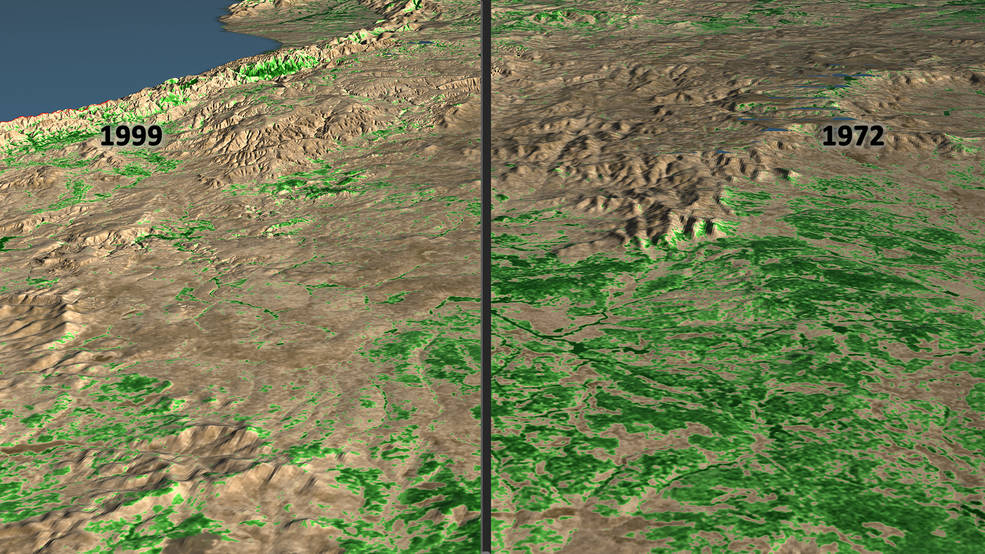 In 2000, Pintea saw his first side-by-side comparison of two Landsat satellite images, one taken in 1972 and the other in 1999, of the region around Gombe National Park, Tanzania. The 1972 image showed forests that stretched across the region. The 1999 image showed vast swaths of deforestation outside of the park, with its boundary written into the landscape. On one side of the park boundary were lush trees covering the steep slopes that rise from the east of Lake Tanganyika. On the other—bare hills.

A joint mission of NASA and the U.S. Geological Survey or USGS, the Landsat series of satellites has provided a continuous record of Earth’s land use for 44 years. Images are available cost-free to the public.

“NASA satellite data helps us understand what it means to be a chimp by overlaying distribution of the habitat with the chimpanzee behavior and ranging data,” Pintea said. The combination allows him and other scientists to see where chimps are most at risk and design conservation strategies.

Chimpanzees in the region used to live in an uninterrupted belt of forest and woodlands from Lake Tanganyika westward through Uganda and the Congo Basin to western Africa. In the early 1970s, 10 or so years after Jane Goodall first arrived in the region and began observing chimpanzees, that forest began to be cut down. Increased pressures on the land from a population explosion as well as poverty have led to clearing forest for agriculture and local logging as well as charcoal production.

“Today the belt per se has gone because it’s being divided into increasingly small fragments,” said Jane Goodall, who at 82 is still active in conservation efforts helmed by her namesake institute. These efforts near Gombe involve engaging the local communities in the conservation planning and monitoring process for the placement and protection of village forest reserves that support both people and chimpanzees. Central to that process has been getting everyone from the villagers to local government officials and other conservation groups to look at the same big picture.

“It was really exciting to see the impact of these images on the villagers,” Goodall said, adding that villagers could identify landmarks and sacred places in the satellite imagery. “It was like a piece of reality dropped magically from the sky.”

Unlike maps, which don’t show the chimpanzees’ habitat side-by-side with human activities, Landsat imagery shows both scientists and the villagers the direct result of various land uses – farming and logging for example – and how they shaped the surrounding terrain and forests.

“When deforestation happens, important ecological functions and services are lost which impacts both chimps and people,” Pintea said. The chimpanzees lose feeding and nesting grounds, and it is very difficult for the territorial animals to shift their home range to another location. People lose local forest resources like honey or specific valuable tree species, as well as suffer alterations of the local water cycle that make erosion and flash flooding new problems.

The satellite images were a game changer for improving local conservation efforts.

“We are informing these planning and management efforts with science and data, including satellite imagery from NASA. But at the end of the day, it’s the villagers’ land use plan and we are there just to facilitate the process. We don’t have a final say in how the communities decide to place a reserve, for example,” Pintea said. The Jane Goodall Institute provides additional support for the use of Android smartphones and tablets for village forest monitors to go into the field to confirm conditions on the ground and evaluate how the plans are working.

Working in partnership with the villagers, the monitoring data they collect combined with a variety of remote sensing imagery, including the Landsat satellite data, has helped Pintea and colleagues in the scientific community better track and understand the relationship between chimpanzee habitat needs and the status of forest habitats. Among the questions they ask are, as the land changes, how do forests, watersheds and chimpanzees respond, and where are the most opportunities to restore and protect critical watersheds and chimpanzee habitats? They then take that information back to the villages surrounding Gombe so the villagers can make science-based conservation and land use decisions, such as where to restrict logging activities.

“We cannot do this project if the Landsat program doesn’t deliver this open data to the scientific community,” Pintea said. NASA and the USGS’s open data policy and research funding support has allowed him and other scientists to build a satellite-based decision support system for monitoring habitat health not only in Gombe but for the entire chimpanzee range in Africa, he said. “We are benefiting from these long-term investments now.”