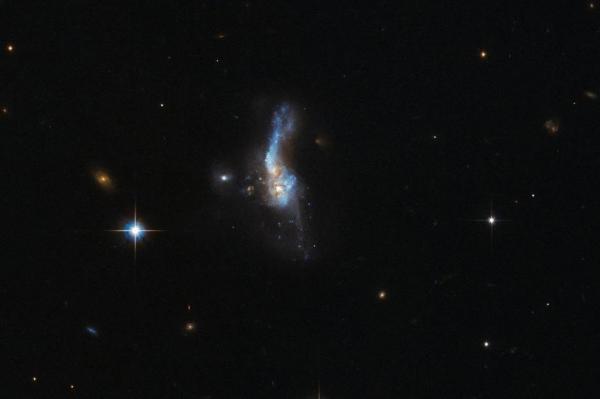 The Hubble Space Telescope has offered a new view of galaxy collision occurring 1 billion light-years away from Earth. The telescope photographed the collision using its Advanced Camera for Surveys, and NASA shared the image on its website this week.

The object of interest is IRAS 14348-1447, named for the space telescope that first identified it, the Infrared Astronomical Satellite, or IRAS. IRAS 14348-1447 is comprised of two gas-rich spiral galaxies in the process of becoming one.

Nearly 95 percent of the radiation emitted by IRAS 14348-1447 registers in the far-infrared, making it one of the brightest ultraluminous infrared galaxies yet observed. It is also one of the most gaseous. The galaxy’s extraordinary brightest in the far-infrared spectrum is fueled by the copious amounts of molecular gas in the system.

The confluence of gas from two globs of gas account for the wispy, ethereal appearance of the distant galactic merger.