Warning: Attempt to read property "ID" on null in /nas/content/live/designworld/wp-content/plugins/GAMkeywords/gam-keyword-target.php on line 219
 Infographic: A Look At Spain’s First Radar Satellite

Multinational aerospace conglomerate Airbus in collaboration with Hidseset (Spain’s operator of governmental satellites) have spent years developing the PAZ (Spanish for “peace”) satellite, which is scheduled to launch July 30, 2018. After spending the past two years in Madrid, the PAZ satellite was transported to Vandenberg, California, where SpaceX rocket Falcon 9 is poised to carry the craft into space. The high resolution, radar, Earth observation PAZ satellite is designed to primarily address civilian surveillance needs, along with covering a multitude of applications that include defense and security—a first of its kind for Spain.

The satellite is equipped with advanced radar instruments designed for flexibility and having the ability to operate in several different modes. This presents the Earth-based team operating the craft with a variety of different image configurations. The PAZ satellite will generate images with up to 25 cm resolution, day and night, regardless of meteorological conditions. The craft is designed for a mission that’s supposed to last for five and a half years. The PAZ satellite will orbit Earth 15 times a day, during which it’ll cover an area over 186,000 square miles from an altitude of 31.68 miles, at a velocity of 4.34 miles per second.

The satellite will be able to cover the globe in 24 hours, while serving governmental and commercial needs on its slightly inclined quasi-polar orbit. The infographic below breaks down and describes the variety of additional functions, capabilities, and design components the PAZ satellite features that will aid the craft on its multi-year mission. 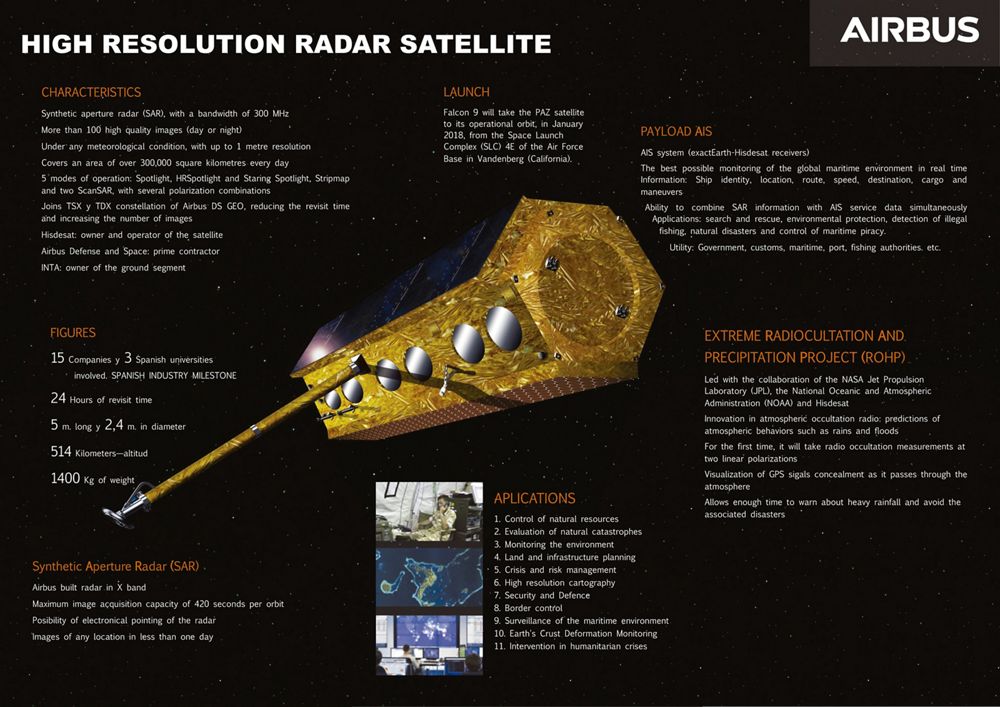