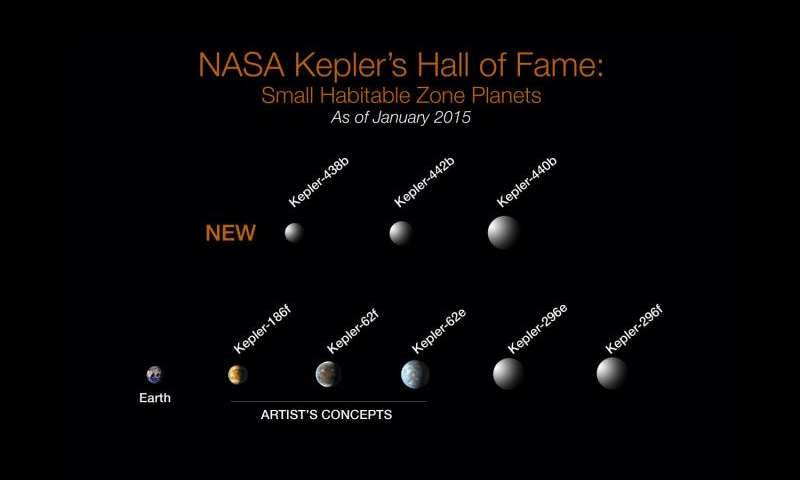 NASA Kepler’s Hall of Fame: Of the more than 1,000 verified planets found by NASA’s Kepler Space Telescope, eight are less than twice Earth-size and in their stars’ habitable zone. All eight orbit stars cooler and smaller than our sun. The search continues for Earth-size habitable zone worlds around sun-like stars. Credits: NASA

How many stars like our sun host planets like our Earth? NASA’s Kepler Space Telescope continuously monitored more than 150,000 stars beyond our solar system, and to date has offered scientists an assortment of more than 4,000 candidate planets for further study—the 1,000th of which was recently verified.

Using Kepler data, scientists reached this millenary milestone after validating that eight more candidates spotted by the planet-hunting telescope are, in fact, planets. The Kepler team also has added another 554 candidates to the roll of potential planets, six of which are near-Earth-size and orbit in the habitable zone of stars similar to our sun.

Three of the newly-validated planets are located in their distant suns’ habitable zone, the range of distances from the host star where liquid water might exist on the surface of an orbiting planet. Of the three, two are likely made of rock, like Earth.

“Each result from the planet-hunting Kepler mission’s treasure trove of data takes us another step closer to answering the question of whether we are alone in the Universe,” said John Grunsfeld, associate administrator of NASA’s Science Mission Directorate at the agency’s headquarters in Washington. “The Kepler team and its science community continue to produce impressive results with the data from this venerable explorer.”

Both Kepler-438b and Kepler-442b orbit stars smaller and cooler than our sun, making the habitable zone closer to their parent star, in the direction of the constellation Lyra. The research paper reporting this finding has been accepted for publication in the Astrophysical Journal.

“With each new discovery of these small, possibly rocky worlds, our confidence strengthens in the determination of the true frequency of planets like Earth,” said co-author Doug Caldwell, SETI Institute Kepler scientist at NASA’s Ames Research Center at Moffett Field, California. “The day is on the horizon when we’ll know how common temperate, rocky planets like Earth are.”

With the detection of 554 more planet candidates from Kepler observations conducted May 2009 to April 2013, the Kepler team has raised the candidate count to 4,175. Eight of these new candidates are between one to two times the size of Earth, and orbit in their sun’s habitable zone. Of these eight, six orbit stars that are similar to our sun in size and temperature. All candidates require follow-up observations and analysis to verify they are actual planets.

“Kepler collected data for four years—long enough that we can now tease out the Earth-size candidates in one Earth-year orbits”, said Fergal Mullally, SETI Institute Kepler scientist at Ames who led the analysis of a new candidate catalog. “We’re closer than we’ve ever been to finding Earth twins around other sun-like stars. These are the planets we’re looking for”.

These findings also have been submitted for publication in the Astrophysical Journal Supplement.

Work is underway to translate these recent discoveries into estimates of how often rocky planets appear in the habitable zones of stars like our sun, a key step toward NASA’s goal of understanding our place in the universe.

Scientists also are working on the next catalog release of Kepler’s four-year data set. The analysis will include the final month of data collected by the mission and also will be conducted using sophisticated software that is more sensitive to the tiny telltale signatures of small Earth-size planets than software used in the past.