Screeching tires let electrical engineer and Vectolabs CEO, Faizal Ali know he almost became a National Highway Traffic Safety Administration (NHTSA) statistic. Ali had downshifted his motorcycle upon exiting a freeway, decelerating without activating the OEM brake light — rapid deceleration via downshifting or coasting without brake light activation is common to motorcycles. The motorist behind Ali had no indication of his deceleration until it was almost too late. An emergency stop prevented a rear-end collision, which the NHTSA claims represents nearly one-third of all vehicle collisions. 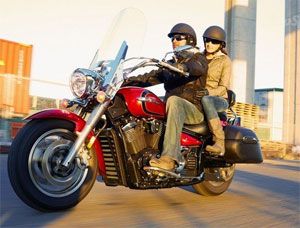 “Immediately you think, ‘What an idiot; he almost hit me,’” Ali recounted. “But then I realized the driver didn’t know I was decelerating.” Recalling that afternoon, he added the driver was possibly distracted by a cell phone. In 2010, the NHTSA found that 18% of “injury crashes” were caused by distracted driving.

Treating the incident as a Corrective Action, Ali sought change by asking “why?” at several levels. This led to the creation of Vectolabs, its flagship product Vololights and a KickStarter crowd funding campaign running until June 12, 2013. Vectolabs seeks $50,000 to further develop Vololights’ plastic mold and lens optics.

The first Adaptive Perceptible Deceleration Indicator, Vololights supplements a motorcycle’s OEM brake light by indicating level of braking urgency, even if a motorcycle’s actual brake is not actuated. Vololights consists of a motorcycle license plate bracket flanked by two horizontal rows of LED lights. An accelerometer and microprocessor monitor deceleration; when a pre-programmed trigger point is crossed, the LEDs flash based on urgency (hard breaking vs. engine breaking via coasting or downshifting). 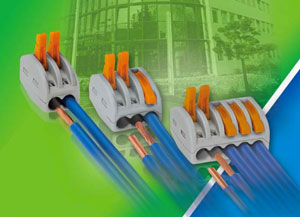 “Vibration-resistance was 90% of it,” Ali recalled. “I specified WAGO because I knew their terminal blocks. At a past job, we had problems with techs not torqueing [other blocks] properly. I didn’t want to mess with that — everything must be Spring Pressure.”

Ali also appreciated the simplicity of LEVER-NUTS lever-actuated terminations. Vololights are a DIY product; errors during complex installation could cause improper operation. Ali added LEVER-NUTSeliminate crimping, which is important because many DIYers don’t have crimpers.

“With LEVER-NUTS, pull up the lever, insert the wire and push it back down,” he explained. “It has to be simple to use; Vololights are likely not going to be installed by a trained electrician.” 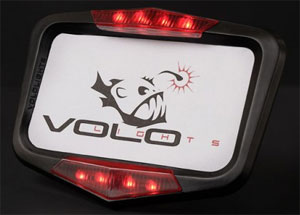 A Bright Future:
Vololights is U.S. production-ready. According to Ali, U.S-based material costs are competitive with China, enabling Vectolabs to scout production sites.

“Efforts were made to remove labor content from the product,” Ali said. “All parts on the PCB minimize human handling.”

“If a taxi driver sees somebody hailing them, they will slam on the brakes to pick them up,” he said. “Most cars don’t do that, but taxis do it all the time. They’d see the most benefit.”

Ali said beyond incorporating LEDs, OEM brake light functionality hasn’t improved much since the 1970s. Through enhancements, such as Vololights, he envisions motorcyclists worrying less about other drivers and enjoying the ride.