Interning at NASA puts students at the center of innovation and discovery. For two students at NASA’s Marshall Space Flight Center in Huntsville, Alabama, this meant having the incredible opportunity to not only leave their mark on one of NASA’s most unique testing facilities, but also release their own open source software.

Junior engineering interns Greta Studier, from Swarthmore College in Pennsylvania, and Tristan Schuler, from George Mason University in Fairfax, Virginia, developed a navigation system that mimics the star tracking navigation system that will be used in space on a small satellite, propelled by an electrostatic sail, currently in development at Marshall.

“To progress our research and development of electrostatic sails, we needed to come up with a localization navigation system to track our robotic prototype in the test lab,” said Studier. “The system we developed provides an inexpensive solution that allows us to track our robot within five centimeters of accuracy.”

Robotic Nano Air-bearing Simulators are being developed and evolved by interns under Marshall’s Technology Innovation Program to test the deployment of the electrostatic sail on Marshall’s Flat Floor Flight Robotics Lab – a state-of-the-art testing facility featuring an epoxy floor designed to allow engineers to simulate movements that help test the guidance, navigation and control systems of spacecraft.

“We’re really proud of the work these students have put into this system,” said Tom Bryan, the students’ mentor and senior engineer for the Flat Floor Flight Robotics Lab. “They are quite modest about their achievement, but what they’ve accomplished here has advanced the capabilities of our Flat Floor Flight Robotics Lab, and can be very valuable to others as open source software.” 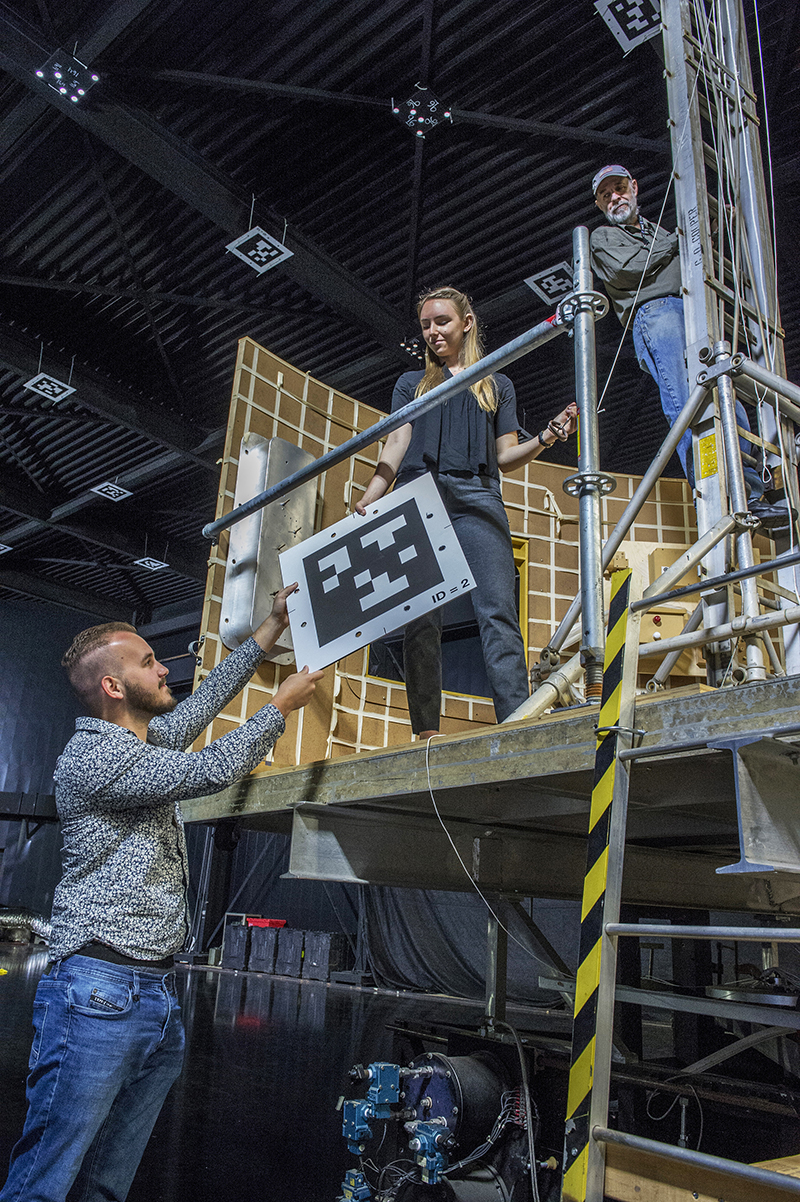 Engineering interns Tristan Schuler, left, and Greta Studier, center, along with their mentor Tom Bryan, install 2D barcodes on the ceiling of the Flat Floor Robotic Lab at Marshall. These barcodes are part of a navigation system developed by Schuler and Studier to mimic the star tracking navigation system that will be used by NASA’s proposed HERTS E-sail. Credits: NASA/Emmett Given

The students’ invention simulates the navigation system that will direct NASA’s Heliopause Electrostatic Rapid Transit System by tracking its location based on the position of the satellite relative to the stars. The proposed HERTS E-Sail concept, a propellantless propulsion system, would harness solar wind to travel into interstellar space. This potentially revolutionary propulsion system could send spacecraft to the edge of our solar system, the heliopause, faster than ever before.

The students named AprilNAV after a 2D tag system, called AprilTAG, developed by the University of Michigan. They began by using AprilTAGs, modifying the code to fit their needs.

“At school, I used AprilTAGs on soda cans to direct a robot to go up to the can and grab it,” said Schuler. “The beauty of this system is that it tells the camera where the tag is located in relation to the camera. With this information, we can take several tags and average the coordinates together to come up with the optimum position of the camera.”

The duo had a series of 2D barcodes, resembling QR codes, printed on foam board and helped mount them at calculated intervals to the facility’s ceiling. A camera was positioned on top of the Nano Air-Bearing Simulator, a robot built by previous interns and modified by Schuler and Studier. The camera is programmed to read the barcodes as the robot floats across the Flat Floor. Then, the robot relays its position back to the students. This process simulates how HERTS will use a star tracker in space as navigation to reach the heliopause.

While AprilNAV was developed from a need and with a specific purpose in mind, it can be used in many different capacities. The students worked with the Office of Technology Transfer at Marshall to release their code to the public.

“The nice thing about AprilNAV is that other users can use the navigation code to create their own control systems,” said Schuler. “For example, robotic labs could use this if they wanted to control quadcopters inside a room.”

The code for AprilNAV is available to the public at no cost on software.nasa.gov and code.nasa.gov.

The HERTS E-Sail concept development and testing is funded by NASA’s Space Technology Mission Directorate through the NASA Innovative Advanced Concepts Program, which encourages visionary ideas that could transform future missions with the creation of radically better or entirely new aerospace concepts. NIAC projects study innovative, technically credible, advanced concepts that could one day “change the possible” in aerospace.