An emerging technology for removing excessive, potentially damaging heat from small, tightly packed instrument electronics and other spaceflight gear will be demonstrated for the first time during an upcoming suborbital flight aboard a reusable launch vehicle.

The Blue Origin New Shepard launch vehicle is flying an experiment designed to prove that the microgap-cooling technology is immune from the effects of zero gravity and therefore, potentially useful for removing heat from tightly packed electronics on spaceflight instruments.

Thermal engineer Franklin Robinson, who works at NASA’s Goddard Space Flight Center in Greenbelt, Maryland, is scheduled to fly his experiment aboard the fully reusable Blue Origin New Shepard launch vehicle to prove that the microgap-cooling technology is immune from the effects of zero gravity.

The demonstration, funded by NASA’s Space Technology Mission Directorate’s Flight Opportunities program, is an important step in validating the system, which engineers believe could be ideal for cooling tightly packed, high-power integrated circuits, power electronics, laser heads or other devices. The smaller the space between these electronics, the harder it is to remove the heat.

Because these devices are vulnerable to overheating — just like any electronic device on Earth — the cooling technology must operate under all conditions, including the microgravity environment found in space.

“Frank [Robinson] is demonstrating the fundamental concept and we need the flight validation to gain confidence,” said Goddard Senior Technologist for Strategic Integration Ted Swanson. “While theory predicts that the lack of gravity would have a negligible impact on the performance of microgap coolers, this needs to be demonstrated in a space-like environment. Otherwise, potential users are unlikely to commit to the technology.” 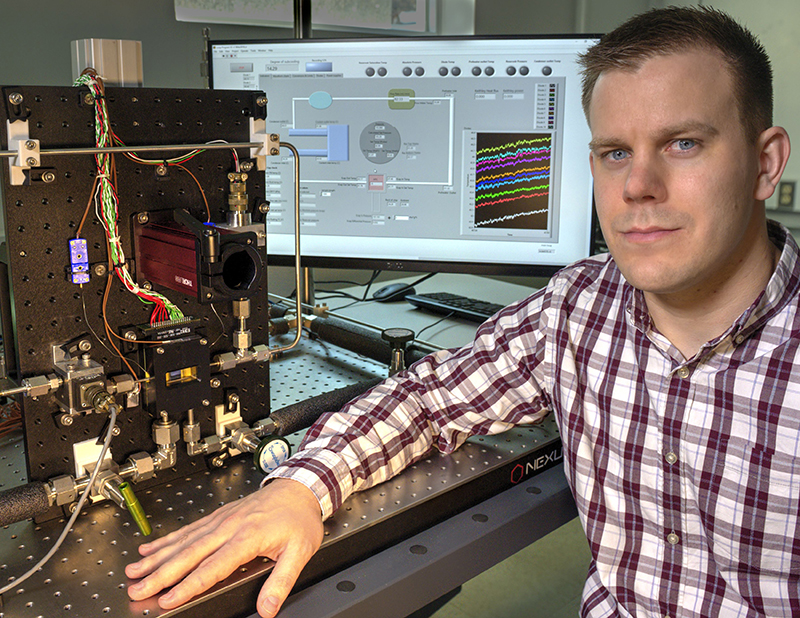 With microgap cooling, heat generated by electronics and other devices is removed by flowing a coolant through embed­ded, rectangular-shaped channels within or between heat-generating devices. Robinson’s flight experiment also features “flow boiling,” where, as its name implies, the coolant boils as it flows through the tiny gaps. According to Robinson, the technique offers a higher rate of heat transfer, which keeps devices cooler and, therefore, less likely to fail due to overheating.

To remove heat in more traditional electronic devices, designers create a “floor plan.” They keep the heat-generating circuits and other hardware as far apart as possible. The heat travels into the printed circuit board, where it is directed to a clamp in the sidewall of the electronics box, eventually making its way to a box-mounted radiator.

Traditional approaches, however, would not work well for emerging 3-D integrated circuitry — a highly promising technology that could satisfy users’ thirst for more computing power.

With 3-D circuitry, computer chips literally are stacked atop one another and not spread over a circuit board, saving space in electronic devices and instruments. Interconnects link each level to its adjacent neighbors, much like how elevators con­nect one floor to the next in a skyscraper. With shorter wiring linking the chips, data moves both horizon­tally and vertically, improving bandwidth, computa­tional speed and performance, all while consum­ing less power.

Because not all the chips are in contact with the printed circuit board, traditional cooling techniques wouldn’t work well with 3-D circuitry, Robinson said, adding he began his research with NASA support to assure that the agency could take advantage of 3-D circuitry when it became available. “However, we can remove the heat by flowing a coolant through these tiny embedded channels.”

Although Robinson has tested his cooling technology at various orientations in a laboratory, the question is whether it would be equally effective in space. “What we need to determine is how small the channels must be to achieve gravity independence. Right now, we don’t have a perfect understanding,” he said.

Should the microgap technology succeed during the demonstration, the next step would be to find an actual application and demonstrate it in space, Swanson said.

Through the Flight Opportunities program, the Space Technology Mission Directorate (STMD) selects promising technologies from industry, academia and government for testing on commercial launch vehicles. The program is funded by STMD, and managed at NASA’s Armstrong Flight Research Center in Edwards, California.

STMD is responsible for developing the crosscutting, pioneering, new technologies and capabilities needed by the agency to achieve its current and future missions.

Feature Photo Credit: The Blue Origin New Shepard launch vehicle is flying an experiment designed to prove that the microgap-cooling technology is immune from the effects of zero gravity and therefore, potentially useful for removing heat from tightly packed electronics on spaceflight instruments. Credit: Blue Origin