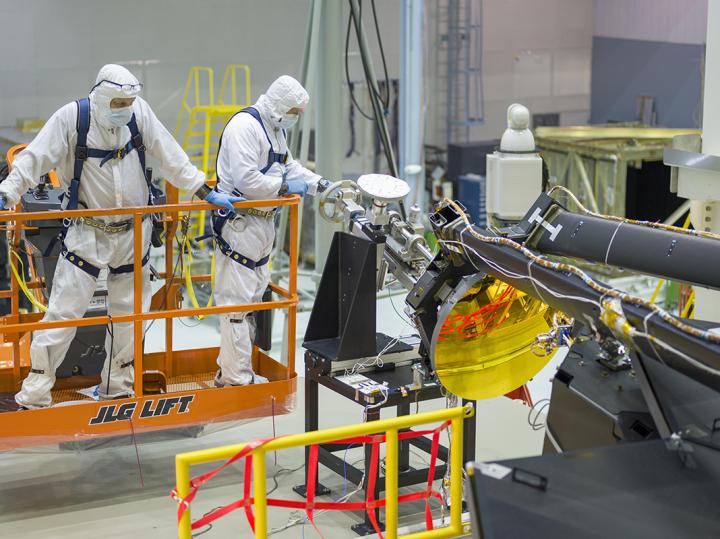 In this photo, engineers are seen installing the secondary mirror onto the telescope. Credit Credits: NASA/Chris Gunn

The sole secondary mirror that will fly aboard NASA’s James Webb Space Telescope was installed onto the telescope at NASA’s Goddard Space Flight Center in Greenbelt, Maryland, on March 3, 2016.

Before its launch, engineers must build and test the telescope rigorously to ensure it survives its launch and its trip one million miles out into space. The James Webb Space Telescope is too large to fit into a rocket in its final shape so engineers have designed it to unfold like origami after its launch.

That unfolding, or deployment, includes the mirrors on the observatory, too.

The secondary mirror is supported by three struts that extend out from the large primary mirror. The struts are almost 25 feet long, yet are very strong and light-weight. They are hollow composite tubes, and the material is about 40-thousandths of an inch (about 1 millimeter) thick. They are built to withstand the temperature extremes of space.

Unlike the 18 primary segments that make up the biggest mirror on the Webb telescope, the secondary mirror is perfectly rounded. The mirror is also convex, so the reflective surface bulges toward a light source. It looks much like the curved mirrors on the walls near parking garage exits that let motorists see around corners. The quality of the secondary mirror surface is so good that the final surface at cold temperatures does not deviate from the design by more than a few millionths of a millimeter – or about one ten-thousandth the diameter of a human hair.

The secondary mirror and all of the mirror segments are made of beryllium, which was selected for its stiffness, light weight and stability at cryogenic temperatures. Bare beryllium is not very reflective of near-infrared light, so each mirror is coated with about 0.12 ounces of gold to enable it to efficiently reflect infrared light (which is what the Webb telescope’s cameras see).

The mirrors were built by Ball Aerospace & Technologies Corp., in Boulder, Colorado. Ball is the principal subcontractor to Northrop Grumman for the optical technology and optical system design. The installation of the mirrors onto the telescope structure is performed by Harris Corporation, a subcontractor to Northrop Grumman. Harris Corporation leads integration and testing for the telescope.

The most powerful space telescope ever built, the Webb telescope will provide images of the first galaxies ever formed and study planets around distant stars. It is a joint project of NASA, the European Space Agency and the Canadian Space Agency.