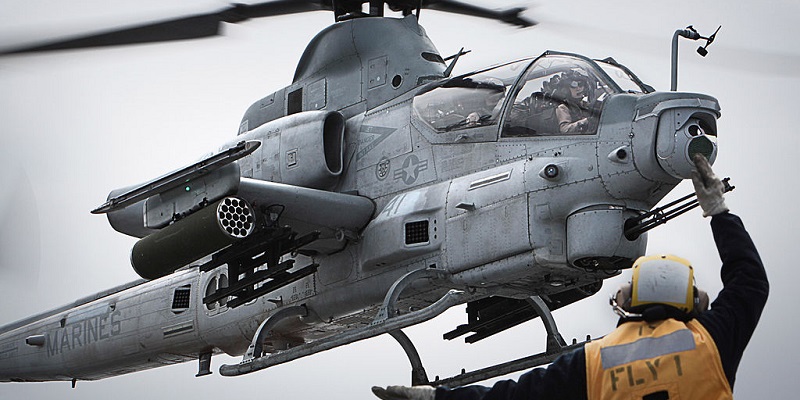 An AH-1Z helicopter is guided before landing on USS Makin Island in 2010. Bell Helicopter will build parts for 24 of the helicopter under a $55.9 million contract. (Image: Cpl. Preston Reed/U.S. Marine Corps website)

Bell Helicopter is being given a $55.9 million Navy contract for parts and components used to manufacture 24 AH-1Z attack helicopters for the H-1 upgrade program, the U.S. Department of Defense announced in its Tuesday publication of military contracts.

None of the funds being assigned at the time the advance acquisition contract is awarded will expire at the end of the current year. The work will be conducted in Fort Worth, Texas and Amarillo, Texas, and is scheduled to be finished in June 2017.

Northrop Grumman Aerospace Systems will be given a $7.2 million Navy contract for support of two variations of the MQ-8 Fire Scout unmanned aircraft system, the MQ-8C and the MQ-8B.

Northrop Grumman will provide test support for the MQ-8C that involves software verification, software regression, cybersecurity, and other work needed for initial operational test and evaluation, according to the DoD. The work pertaining to the MQ-8B involves maintenance support of two of the test aircraft. None of the funds being assigned with the cost-plus-fixed-fee task order will expire at the end of the year. The work will be conducted in Point Mugu, Calif., and should be finished in October 2016.

Armtec Countermeasures has been given a $9 million Air Force contract for infrared countermeasure flares. The Air Force received two offers for the firm-fixed-price contract. The work will be conducted in Camden, Ark., and should be finished by June 2, 2017.