Between 2014 and 2016, it was taxation and extortion—not oil—that filled the coffers of the militant Islamic group ISIS, according to a new assessment that relied on NOAA satellite data. The publication also describes how anyone can use rapidly updated NOAA data to quickly assess the production status of oil wells around the world.

Quy-Toan Do, a senior economist with the World Bank’s Development Economics Research Group, led the research, which estimated 2012-2016 oil production rates in areas of Iraq and Syria taken over by ISIS, also called ISIL, Daesh or the Islamic State.

Do and his colleagues—including NOAA’s Chris Elvidge and CIRES/University of Colorado Boulder’s Mikhail Zhizhin and Kimberly Baugh—found that production in 43 key sites peaked in 2014 at about 80,000 barrels per day. That figure dropped to about 35,000 in 2015, and plummeted to just 16,000 in 2016.

“This is important information if we are talking about postwar reconstruction,” said Do. “Most of the oil wells are not as operational as they were before. This information is critical for people who will try to rebuild the area.”

In Syria and Iraq ISIS expansion began in 2013 and accelerated in 2014. At times, some governments and media suspected that the terrorist organization was financing itself primarily from oil revenues. The new study shows that to be highly unlikely.

“These results lend support to the view that Daesh is financing itself out of other sources such as taxation and extortion rather than oil,” the team wrote in the World Bank Policy Research Working Paper, released online Nov. 1.

The analysis relied on a heat-sensing technique developed by a team of Boulder, Colorado-based researchers associated with NOAA’s National Centers for Environmental Information. Zhizhin, who has been part of that team for five years, is a mathematician, and his recent focus has been on working with data from an instrument called VIIRS (the Visible Infrared Imaging Radiometer Suite) on the NOAA/NASA Suomi NPP satellite.

Since 2012, Zhizhin has produced monthly updates on gas flaring around the world with incredible precision, using an algorithm dubbed “Nightfire.” “These are at level of individual flares,” Zhizhin said.

The technique relies on the fact that during oil production, engineers must somehow deal with gas that comes up to the surface along with oil. Generally, that gas is flared, producing a nighttime signal that’s possible to see by satellite—though it takes careful analysis to separate flaring from other signals, such as electric lights.

For verification that their oil production estimates were reasonable, the team compared their estimates other sources of information, e.g, administrative data in documents captured in May 2015. That month, U.S. Army special forces killed Abu Sayyaf, known as a leader who “helped direct the terrorist organization’s illicit oil, gas and financial operations,” and the raid also yielded production statistics.

Pre-war estimates compared well, and the satellite data also matched the captured administrative data for 2014. However, the Daesh documents indicated significant output later, from a few sites at which satellites detected no activity at all, not even the electrical lighting one would expect at a production site. “It’s possible that internal political motivations may bias administrative data upwards,’ the authors concluded.

Do said his work with the Boulder-based team was, in part, accidental. “I was working on Syria and contacted Chris Elvidge with the idea of trying to see damage from the war. Could we detect electrical power outages, for example, or areas under ISIL control that might be blacked out?”

Elvidge explained that one of the challenges in reliably tracking electric light signals by satellite is removing the signal from nearby flaring activity. “So we began talking about how we might use this to our advantage, looking at production,” Do said.

Although the oil production analysis took several months to complete this first time, it demonstrated that the technique can be reliable and could be applied in real-time to other situations.

Zhizhin said it’s been rewarding to work on a project with real-world implications. “I am a mathematician. I just love numbers. But you have to be able to touch results sometimes. This is touching the result.” 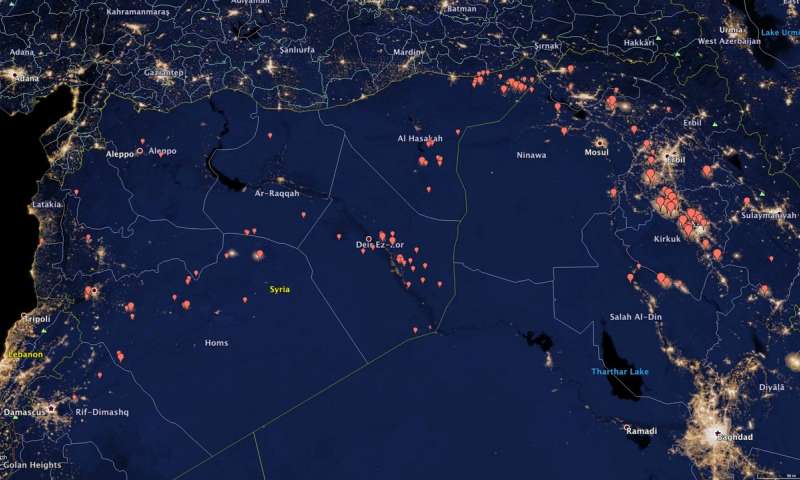