Those who work with metal have known for millennia that hammering the material strengthens it. Even Bronze Age blacksmiths bolstered armor, swords, and tools by forging and pre-stressing the metal with blows from a hammer.

Thousands of years later, technology has advanced to shot peening, a technique in which metal is bombarded with millions of tiny steel balls from a small nozzle at high velocity, creating microscopic dents, or dimples, in the surfaces of metal parts. 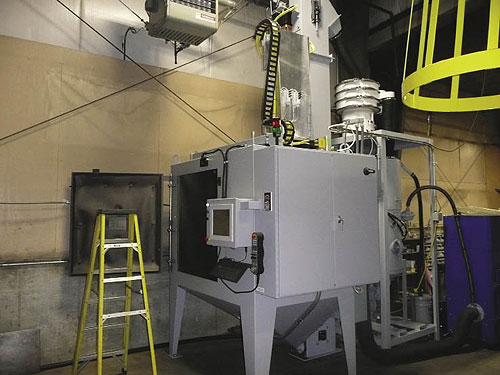 The peening machine offers a simple HMI interface and seven axes of motion.

While it sounds counterintuitive, shot peening actually makes the material more durable because the dimples convert tensile stresses, which may compromise metal integrity, into compressive stresses that hold the material together. Nearly all fatigue and stress corrosion failures start at the surface of a part, but cracks will not begin or spread in a compressively stressed zone. Because the overlapping dents from shot peening produce a uniform layer of compressive stress at metal surfaces, shot peening imparts substantial increases in the life of a part.

This increased life is especially important when it comes to mission-critical aerospace components like engine blades. “Virtually every piece of a jet engine that moves is shot peened,” said Tom Beach, president of Connecticut-based Peening Technologies Equipment, whose computer-controlled equipment helps transform metal into reliable airplane parts. Beach says that compared with the cost of aerospace parts, shot peening is a fairly inexpensive process.

Peening Technologies was able to reduce costs when developing its systems with the assistance of Axis New England, their local Parker distributor. “We wanted to create a multi-axis and scalable shot peening machine that had a simple HMI interface but still offered sophisticated motion control,” said Beach. The machine they created includes BE servo motors, MPP/MPJ servo motors, PX gearboxes, Aries servo drives, ACR controllers, 6K controllers, and associated accessories, which provide up to seven axes of motion. (For now, the HMI is a custom unit Beach designed, though they have plans to upgrade to Parker’s InteractX.) Older style, single axis, multi-nozzle machines required users to spend time setting up each individual part, but robotic automation allows a user to set up multiple parts by loading a single program into the machine.

The final result has been a machine that allows for a shortened development cycle—and happy end-users. “The best feedback is there’s not a lot of feedback,” says Beach. “There’s nothing to complain about. Our customers have been very happy with this very reliable machine.” 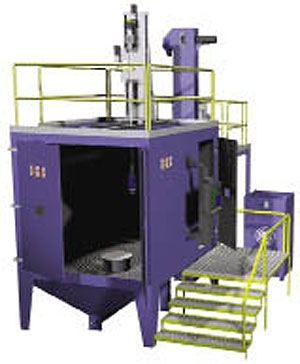