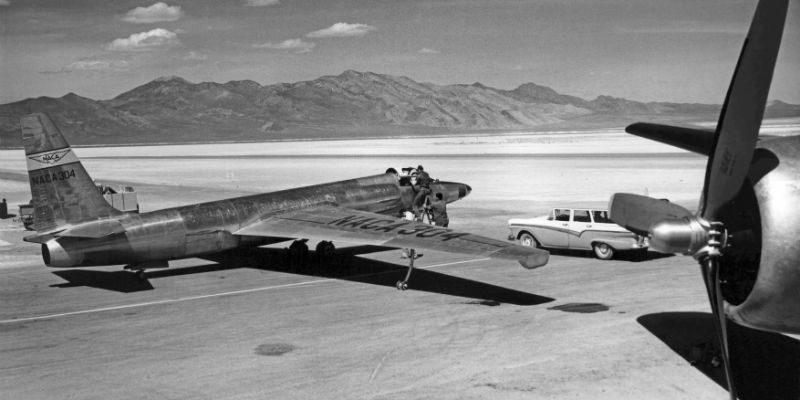 Sixty years ago, a spindly silver airplane made its first flight in total secrecy. Designed by Lockheed Aircraft Corporation (now Lockheed Martin) as a spy plane for the Central Intelligence Agency (CIA), it has since evolved into a versatile platform for scientific research.

Read more: NASA ER-2 Is Legacy of 6 Decades of Achievement

NASA operates two Lockheed ER-2 Earth resources aircraft – a variant of the U-2 – as flying laboratories in the Airborne Science Program under the agency’s Science Mission Directorate. Both aircraft, based at NASA Armstrong’s Building 703 in Palmdale, California, collect information about natural resources, celestial observations, atmospheric chemistry and dynamics, and oceanic processes. Capable of attaining altitudes above 70,000 feet, the aircraft are also used for electronic sensor research and development, satellite calibration, and satellite data validation.

In the above photo, ground crewmen prepare a CIA U-2 for a training flight at Watertown Strip, Nevada. Note NACA markings on the wing and tail.

Use of the U-2 as a civilian research platform began in February 1956, several months after the aircraft’s maiden flight from an isolated test site. Anticipating a surge in off-range training sorties and eventual overseas deployment, CIA officials devised a cover story to explain the airplane’s unique capabilities and disguise its true mission. This necessary fiction contained elements of truth that served as a foundation for later efforts in the field of airborne science.

In early 1970, the CIA transferred two U-2C airframes to NASA for use in the agency’s Earth Resources program. In the above photo, a U-2C climbs to altitude. By 1978 two NASA U-2s were flying an average of 100 missions annually and had logged more than 4,000 flight hours.

Based at Ames Research Center, Moffett Field, California, they routinely flew missions all around the continental US, as well as being deployed to Alaska, Hawaii, and Panama. When Lockheed received a contract to restart U-2 production in 1980, NASA officials were quick to order one of the new models, which the agency dubbed the ER-2. The two U-2C were retired in 1987 and 1989, their duties being taken over by the newer models. For a time, NASA operated three ER-2 aircraft simultaneously. One was eventually returned to the Air Force and in 1998 and, as part of a cost-saving effort to consolidate NASA aircraft fleets, both remaining ER-2s were transferred to NASA Dryden Flight Research Center (now Armstrong).

In the above photo, NASA’s ER-2 and U-2C fly over San Francisco Bay and the Golden Gate Bridge.

In the above photo, an ER-2 high-altitude Earth science aircraft banks away during a flight over the southern Sierra Nevada. NASA’s Armstrong Flight Research Center operates two of the Lockheed-built aircraft on a wide variety of environmental science, atmospheric sampling, and satellite data verification missions.