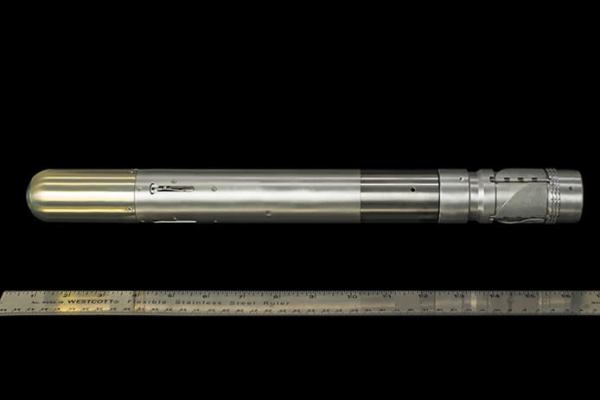 The Waltham, Massachusetts-based company displayed a model of the so-called Pike precision-guided munition on Monday at the Association of the United States Army’s annual conference in Washington, D.C.

“What’s enabled this is the miniaturization of electronics,” James R. “J.R.” Smith, director of advanced land warfare systems at Raytheon’s missile systems unit in Tucson, Arizona, said during an interview with Military​.com.

Measuring just 17 inches long and 1.5 inches wide and weighing just 1.7 pounds, the projectile has a range of about 2 kilometers and is designed to be fired from existing rocket-propelled grenade launchers, such as the M203 and ELGM, Smith said.

While the munition will cost more than a unguided rocket-propelled grenade, it would be orders of magnitude cheaper than the FGM-148 Javelin anti-tank missile some troops now carry, he said.

“A lot of what our Special Forces teams are dealing with when they’re engaging someone at range right now … they’re sitting there and they’re using a .50-caliber machine gun or firing rocket-propelled grenades, they’re not hitting the target and they’re being out shot by a lot of these bad guys,” Smith said. “So how do they deal with that now?

“They pull out a Javelin, which is a pretty expensive weapon,” he said. “Whereas you could take one of these. I guarantee you this will be a tiny fraction of the cost of a Javelin.” The Javelin is made by Raytheon and Lockheed Martin Corp. And while the Pike will have less stopping power than the Javelin, it will feature a blast-fragmentation warhead sufficient for taking out two people behind a wall, he added.

Smith wouldn’t say how much internal research and development funding the company spent on the project, but he said the effort has been underway for about three years. In May, Raytheon successfully tested two Pike munitions with dummy warheads at a private range in Texas, he said. The technology is compatible with any kind of properly coded laser designator, he said.

“It sees the reflection of laser energy off the target,” he said. “It’s looking for that laser energy. As it hits its apogee and it starts coming downhill, it will see its laser spot … You don’t even have to start by lasing. You can launch it, just as long as you get the laser on it before it hits its apogee and starts coming down. For a long shot like that, you could probably lase 15 seconds after launch.”

An M203 launcher beneath an M4 rifle would need to be modified to accept the round, Smith said. “The ones that are underneath the M4 carbines now, they can’t swing out far enough to slide it in,” he said. “It only sticks out so far. So they would have to modify that.”

Raytheon officials are talking to Army personnel about helping to fund additional testing of the design to include live-fire exercises, Smith said.