Makers of unmanned vehicles are leaning on technology to field drones that can fly longer with fewer worries about maintenance.

Eyeball the radio-controlled model planes at your local hobby store and you’ll likely see some of the same components now found on the unmanned aerial vehicles used in missions over Afghanistan. But check out the price tags. Super-hot engines for model planes typically run in the $400 to $1,000 range. Similar engines for UAVs used on military and government agency missions can run $5,000 or more.

Military and research agencies use the SeaHunter from Griffon Aerospace in Madison, Ala., for training, test, data collection, and system development. The UAV is powered by two DA150 electronic fuel-injected engines from HFE International. Each of these 150-cc boxer-style engines put out 9.9 kW and let the SeaHunter have a max take-off weight in the 250-300 lb range while also offering up to 2 kW of on-board electrical power for power-dependent payloads. The use of electronic fuel injection and special fuel pumps lets these engines work reliably at 10,000 ft.

Is it a case of gouging Uncle Sam? Nah. It’s true that some early small UAVs borrowed much of their technology from the hobby world. However, there’s a problem with repurposing hobby technology for more critical applications: Cost, not reliability, is generally the first consideration for consumer products. As UAV applications have become more strategic, and their payloads more expensive, suppliers have developed components and propulsion systems that emphasize durability.

To see how hobby components become more rugged, consider the UAV engines produced by HFE International in Tucson, Ariz. HFE takes consumer-grade engines made by Desert Aircraft, also in Tucson, and modifies them for use in critical applications as run by the military and government agencies. The key component in the durability equation is a special electronic fuel injector, explains HFE CEO Thomas West. “A hobby engine might only work a couple of hundred hours reliably. The main problem is the carburetor. Smaller engines are more difficult to tune because of the smaller dimensions of the needles and orifices and because they tend to vibrate more than larger engines,” says West.<

Hobby engines also tend to have more trouble at higher altitudes. “If you are not good at tuning a hobby engine you will get a ceiling of only about 5,000 ft. And if you rely on a human operator you will get a lot of variability in how long the engine lasts. Tune it too lean and the rings and pistons wear out prematurely. If it’s too rich the bearings wear and soot builds up in the head,” West says.

It turns out that the addition of a special fuel system and fuel injection goes a long way toward curing the ills of low ceilings and premature engine wear. “Fuel vapor pressure is a problem at really high altitudes,” says West. “Gas put in the tank at sea level is prone to vapor lock at 20,000 ft because the liquid gas is trying to change into a vapor at the low pressure up there. You can end up with air in the fuel pump, and most pumps stop working when that happens. High-dollar fuel systems come with pumps that can withstand the potential for vapor lock. They generally use a slow-moving piston pump that compresses the vapor back into a liquid. The engine runs lean but at least it will keep going.”

Engine technologies
HFE builds its engines on a two-cylinder boxer-style block. But aviation experts say that for the near future, no one propulsion technology will dominate in UAVs. Different internal combustion engine (ICE) technologies have different strengths and weaknesses that depend on factors such as the UAV speed, altitude, and weight. For example, it looks as though electric motors and batteries will be confined to powering only small UAVs for the near future. The problem is that even high-energy lithium batteries have much less energy density than conventional airplane fuel. (Rechargeable lithium-ion batteries typically come in the 0.9 to 2.63 MJ/L range. Ordinary gasoline is about 34.2 MJ/L.)

The HQ-60 by Latitude Engineering in Tucson, Ariz. is a hybrid quad rotor that lifts off from the ground like a helicopter then transitions to flight as a conventional plane. Designed for 12 to 24-hr missions, it carries payloads ranging from 8 to 12 lb. Power comes from a DA 70 electronic fuel-injected engine from HFE International. This 70-cc engine puts out 4.5 kW (6 hp) and is built on a base engine from Desert Aircraft that is frequently used for hobby planes. To make an engine that is reliable enough for more serious applications, HFE adds fuel injection and a special fuel pump able to work well at high altitudes.

Conversely, small ICEs tend to be inefficient, so comparably sized electric motors have an advantage in some kinds of UAV missions. For example, 400-W electric motors from Aveox Inc. for use in RC models sport efficiencies up to about 88%. Automotive gasoline engines are about 30% efficient or less; the smaller cylinder engines as found in UAVs are even less so.

Similarly, large gas turbines can exceed 55% thermal efficiency, but turbine engines tend to be too inefficient for applications below about 200 kW — when idling, they are less efficient than ICEs in cars. So they are only found in bigger drones and in those that demand fast flight. 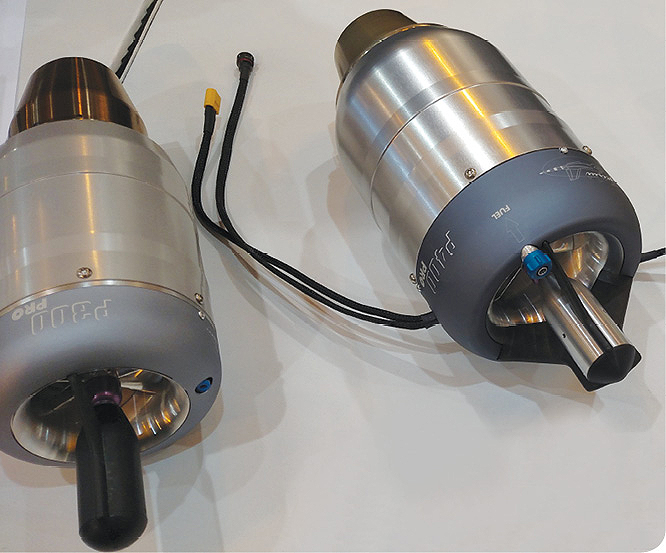 Jet engines like these examples from JetCat Germany can be found in drones, but only when there’s a need for speed that out-weighs the fact that such engines burn through a lot of fuel quickly. The record for the longest hoverboard flight was set with a hoverboard powered by four P400-pro engines, according to a JetCat spokesperson. The P400 develops 397 N of thrust at max speed while sucking in 1,300 ml/min of jet fuel. It weighs in at about 8 lb. The protrusion on the front of the engine (left) is a generator. The slightly larger P550-pro generates 550 N of thrust and weighs 10.8 lb.

Experts say ICE technologies that include two and four-stroke cylinder engines, Wankels, and diesel technology are seeing advances that make them good candidates for some kinds of UAV applications. Two-stroke diesels have long been applied in marine vehicles, rail engines, and trucks. They are possibilities for large UAVs because they have a good power-to-weight ratio and are relatively efficient. Challenges include reliability, weight, operation at high altitudes, and cost.

In these areas, UAV engines are expected to benefit from advances in automotive engine technology. For example, automakers that include Mazda, Honda, and VW now make diesels with aluminum cylinder blocks as a means of reducing weight. This approach has only become practical recently because the high cylinder compression pressures and heat that characterize diesel combustion are problematic for aluminum. Manufacturers overcome this difficulty using wet cylinder architectures with cylinder liners made of high quality iron. The liners are in the bottom and top of the block. The middle external walls directly exposed to water passages.

Advanced aluminum alloy cylinder heads are capable of withstanding the pressures diesel fuel creates because the size is small enough to withstand it. But the vibration associated with the impulse torque during combustion can be severe, and this issue is still an area of research.

Wankel rotary engines are widely used in drones because they are inherently balanced. They also generally weigh less than piston engines of comparable power and are known for a high power-to-weight ratio, as high as 1.7 hp/lb. Wankels are four-stroke engines. Compared to four-stroke reciprocating piston engines, the Wankel has higher volumetric efficiency. Its power strokes quasi-overlap so the engine tends to run smoothly. However, Wankels spin at high rates so require reduction drives when turning most propellers. 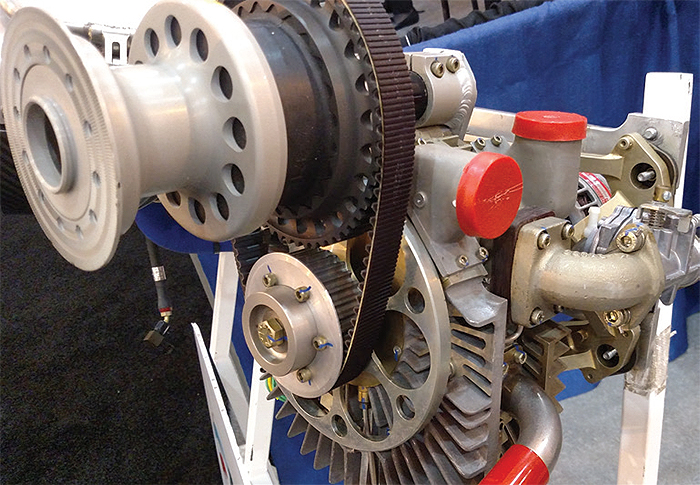 Wankel engines from UAV Engines Ltd. have flown since 1986 in drones that include the Textron Systems AAI Shadow. Wankels can be air or liquid-cooled. Those that power drones typically are in the 4 to 100-hp range. These four-stroke engines can exhibit power-to-weight ratios of about 1.7 hp/lb.

Wankels in UAVs typically are in the 4 to 100 hp range. Durability is one research area for these power plants. For example, Wankel engine maker UAV Engines Ltd. says that its engines typically need minor maintenance after about 50 hrs and a more major workover after about 200 hrs. But, says Len Louthan – a Wankel engine expert involved in applying Wankel diesel engines to military electrical power generation applications – UAV makers are looking for Wankels able to run for about 1,000 hrs before needing serious maintenance.

Louthan also says military UAV users would like to see Wankels, as well as other kinds of ICEs, run on JP-8 jet fuel. But that goal is problematic on a variety of levels. One difficulty: JP-8 is basically kerosene. It has less lubricity than diesel fuel. So diesel durability tends to suffer when running JP-8. 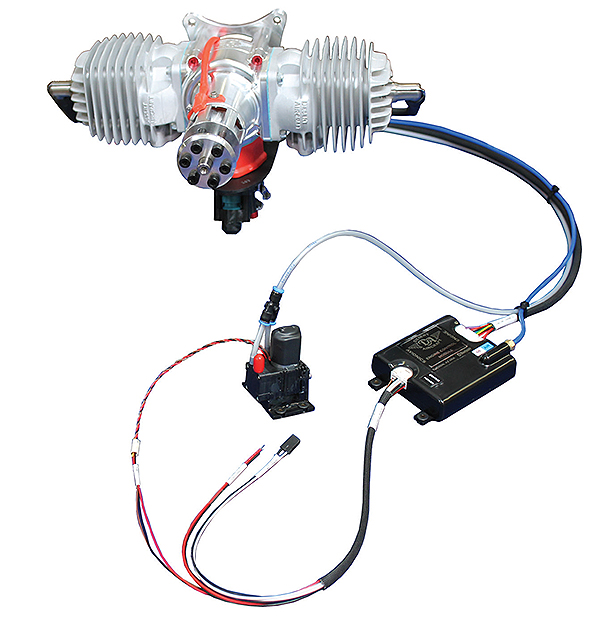 The DA 120 EFI (electronic fuel injected) engine from HFE International is an example of a hobby engine that has been re-engineered for use in more serious applications. The base block is from Desert Aircraft to which HFE adds electronic fuel injection and fuel pumps that provide more reliable operation, particularly at high altitudes. This re-engineered 121-cc engine puts out 8.7 kW (11.7 hp).

And conventional Otto-cycle engines have their own set of issues when they try to run JP-8. “It can be difficult to atomize the fuel sufficiently to get it into a vapor that can combust,” says HFE International’s Tom West. “Because it is basically kerosene, it is just tough to get JP-8 to vaporize.”

So it looks as though the use of heavy aviation fuels in UAVs will remain a topic of research for some time to come.