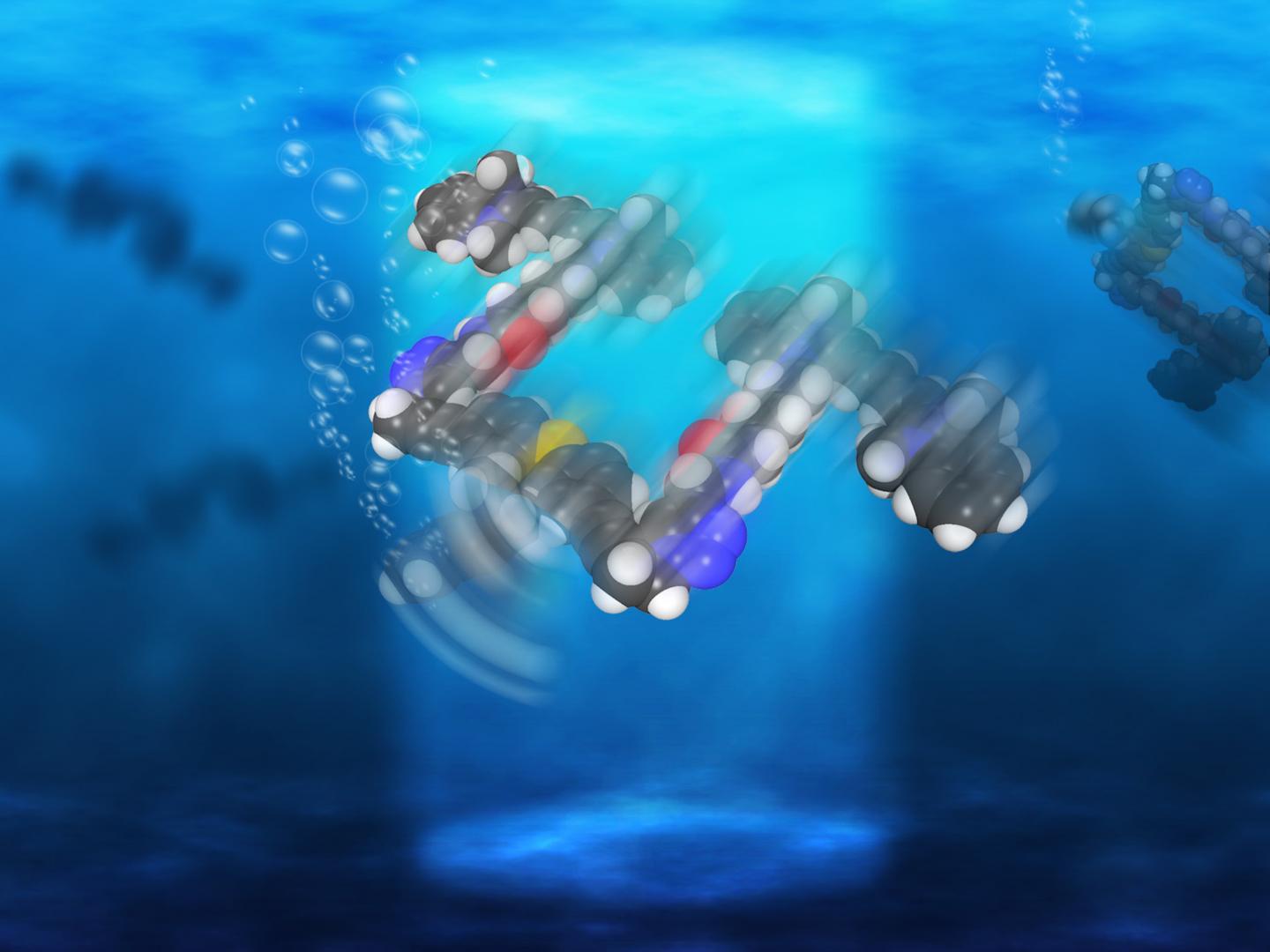 Though they’re not quite ready for boarding a lá “Fantastic Voyage,” nanoscale submarines created at Rice University are proving themselves seaworthy.

Each of the single-molecule, 244-atom submersibles built in the Rice lab of chemist James Tour has a motor powered by ultraviolet light. With each full revolution, the motor’s tail-like propeller moves the sub forward 18 nanometers.

And with the motors running at more than a million RPM, that translates into speed. Though the sub’s top speed amounts to less than 1 inch per second, Tour said that’s a breakneck pace on the molecular scale.

“These are the fastest-moving molecules ever seen in solution,” he said.

Expressed in a different way, the researchers reported this month in the American Chemical Society journal Nano Letters that their light-driven nanosubmersibles show an “enhancement in diffusion” of 26 percent. That means the subs diffuse, or spread out, much faster than they already do due to Brownian motion, the random way particles spread in a solution.

While they can’t be steered yet, the study proves molecular motors are powerful enough to drive the sub-10-nanometer subs through solutions of moving molecules of about the same size.

“This is akin to a person walking across a basketball court with 1,000 people throwing basketballs at him,” Tour said.

Tour’s group has extensive experience with molecular machines. A decade ago, his lab introduced the world to nanocars, single-molecule cars with four wheels, axles and independent suspensions that could be “driven” across a surface.

Tour said many scientists have created microscopic machines with motors over the years, but most have either used or generated toxic chemicals. He said a motor that was conceived in the last decade by a group in the Netherlands proved suitable for Rice’s submersibles, which were produced in a 20-step chemical synthesis.

“These motors are well-known and used for different things,” said lead author and Rice graduate student Victor García-López. “But we were the first ones to propose they can be used to propel nanocars and now submersibles.”

The motors, which operate more like a bacteria’s flagellum than a propeller, complete each revolution in four steps. When excited by light, the double bond that holds the rotor to the body becomes a single bond, allowing it to rotate a quarter step. As the motor seeks to return to a lower energy state, it jumps adjacent atoms for another quarter turn. The process repeats as long as the light is on.

For comparison tests, the lab also made submersibles with no motors, slow motors and motors that paddle back and forth. All versions of the submersibles have pontoons that fluoresce red when excited by a laser, according to the researchers. (Yellow, sadly, was not an option.)

“One of the challenges was arming the motors with the appropriate fluorophores for tracking without altering the fast rotation,” García-López said.

Once built, the team turned to Gufeng Wang at North Carolina State University to measure how well the nanosubs moved.

“We had used scanning tunneling microscopy and fluorescence microscopy to watch our cars drive, but that wouldn’t work for the submersibles,” Tour said. “They would drift out of focus pretty quickly.”

The North Carolina team sandwiched a drop of diluted acetonitrile liquid containing a few nanosubs between two slides and used a custom confocal fluorescence microscope to hit it from opposite sides with both ultraviolet light (for the motor) and a red laser (for the pontoons).

The microscope’s laser defined a column of light in the solution within which tracking occurred, García-López said. “That way, the NC State team could guarantee it was analyzing only one molecule at a time,” he said.

Rice’s researchers hope future nanosubs will be able to carry cargoes for medical and other purposes. “There’s a path forward,” García-López said. “This is the first step, and we’ve proven the concept. Now we need to explore opportunities and potential applications.”