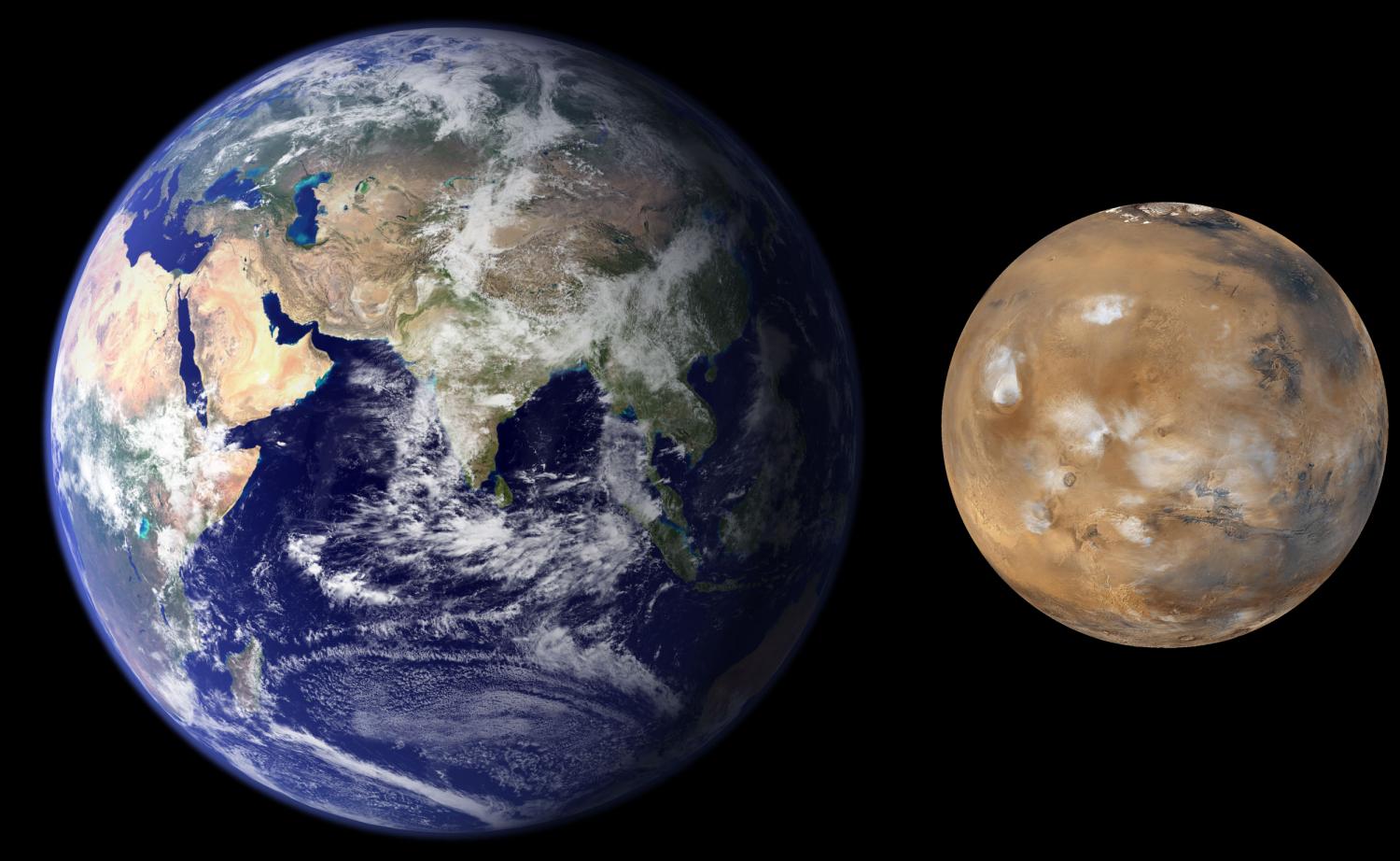 Using a new process in planetary formation modeling, where planets grow from tiny bodies called “pebbles,” Southwest Research Institute scientists can explain why Mars is so much smaller than Earth. This same process also explains the rapid formation of the gas giants Jupiter and Saturn, as reported earlier this year.

“This numerical simulation actually reproduces the structure of the inner solar system, with Earth, Venus, and a smaller Mars,” said Hal Levison, an Institute scientist at the SwRI Planetary Science Directorate. He is the first author of a new paper published in the Proceedings of the National Academy of Sciences of the United States (PNAS) Early Edition.

The fact that Mars has only 10 percent of the mass of the Earth has been a long-standing puzzle for solar system theorists. In the standard model of planet formation, similarly sized objects accumulate and assimilate through a process called accretion; rocks incorporated other rocks, creating mountains; then mountains merged to form city-size objects, and so on. While typical accretion models generate good analogs to Earth and Venus, they predict that Mars should be of similar-size, or even larger than Earth. Additionally, these models also overestimate the overall mass of the asteroid belt.

“Understanding why Mars is smaller than expected has been a major problem that has frustrated our modeling efforts for several decades,” said Levison. “Here, we have a solution that arises directly from the planet formation process itself.”

New calculations by Levison and co-authors Katherine Kretke, Kevin Walsh and Bill Bottke, all of SwRI’s Planetary Science Directorate follow the growth and evolution of a system of planets. They demonstrate that the structure of the inner solar system is actually the natural outcome of a new mode of planetary growth known as Viscously Stirred Pebble Accretion (VSPA). With VSPA, dust readily grows to “pebbles”—objects a few inches in diameter—some of which gravitationally collapse to form asteroid-sized objects. Under the right conditions, these primordial asteroids can efficiently feed on the remaining pebbles, as aerodynamic drag pulls pebbles into orbit, where they spiral down and fuse with the growing planetary body. This allows certain asteroids to become planet-sized over relatively short time scales.

However, these new models find that not all of the primordial asteroids are equally well-positioned to accrete pebbles and grow. For example, an object the size of Ceres (about 600 miles across), which is the largest asteroid in the asteroid belt, would have grown very quickly near the current location of the Earth. But it would not have been able to grow effectively near the current location of Mars, or beyond, because aerodynamic drag is too weak for pebble capture to occur.

“This model has huge implications for the history of the asteroid belt,” said Bottke. Previous models have predicted that the belt originally contained a couple of Earth-masses’ worth of material, meaning that planets began to grow there. The new model predicts that the asteroid belt never contained much mass in bodies like the currently observed asteroids.

“This presents the planetary science community with a testable prediction between this model and previous models that can be explored using data from meteorites, remote sensing, and spacecraft missions,” said Bottke.

This work complements the recent study published in Nature by Levison, Kretke, and Martin Duncan (Queen’s University), which demonstrated that pebbles can form the cores of the giant planets and explain the structure of the outer solar system. Combined, the two works present the means to produce the entire solar system from a single, unifying process.

“As far as I know, this is the first model to reproduce the structure of the solar system—Earth and Venus, a small Mars, a low-mass asteroid belt, two gas giants, two ice giants (Uranus and Neptune), and a pristine Kuiper Belt,” said Levison. The article, “Growing the Terrestrial Planets from the Gradual Accumulation of Sub-meter Sized Objects,” is published online by PNAS.