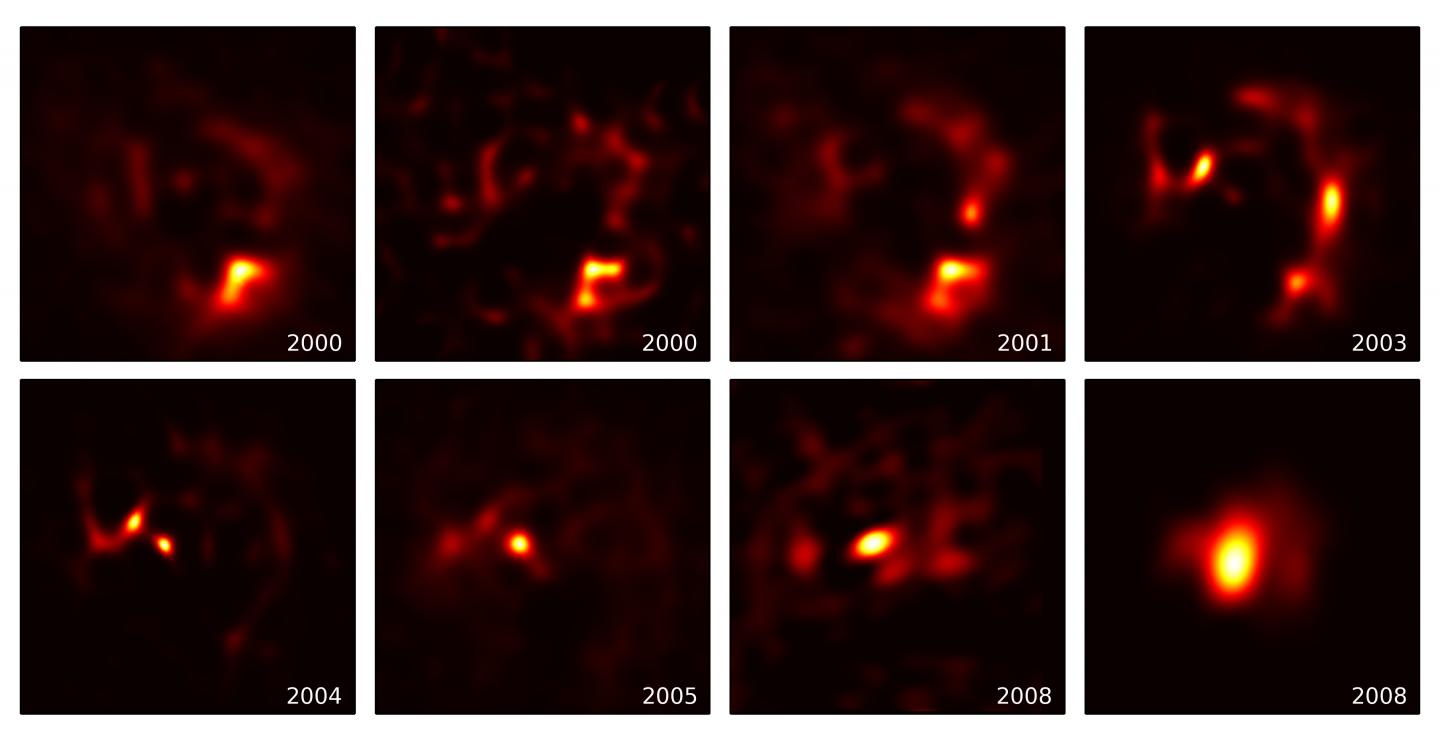 High angular resolution images of IRC+10216 presented in several near infrared wavelengths spanning more than 8 years. Reconstructed from interferometric observations obtained at observatories with some of the largest telescopes in the world — Keck and the VLT, as well as from stellar occultations by the rings of Saturn observed with the Cassini spacecraft.

It is the brightest infrared star in the Northern sky, but a University of Sydney student has found that astronomers have been mistakenly interpreting the dust in the environment of a famous star that lies 450 light years from Earth.

The star CW Leo also going by the moniker IRC+10216, would be the second brightest star in the sky if our eyes could see infrared light. Images of its circumstellar environment released today reveal substantial evolution occurring over a span of more than eight years, with none of the previously identified bright spots in fact containing the star, which is now believed to be buried in its own dust.

Graduate student Paul Stewart has reconstructed images from 2000 to 2008 — which are more akin to a changing inkblot pattern than a star — including high angular resolution images from stellar occultations by the rings of Saturn observed with the Cassini spacecraft.

Astrophysicist Professor Peter Tuthill, who has been supervising the work, last month with scientists in the United States published the first-ever images of a newborn infant planet. Professor Tuthill said the new images made it clear that the red giant’s clumps and plumes of hot dust being ejected had confused generations of astronomers, who interpreted them as key structural elements to the system.

CW Leo is one of the most extensively studied evolved stars, believed to be on the cusp of planetary nebula formation — the process ending the red giant’s life is potentially already under way.

The new findings and images are published today in the Monthly Notices of the Royal Astronomical Society(MNRAS).

Lead author Mr Stewart said observing the star was like peering into a roiling cauldron of heat and dust as the star’s appearance slowly evolved — but the changes became even more dramatic recently.

“In the space of a couple of years, it has completely shed its familiar identity and adopted an entirely new visage,” Mr Stewart said.

Professor Tuthill, who is co-author of the paper, reflected: “This is one of those humble moments when nature reminds us all who is boss. For the past 20 years, many astronomers — and I count as one — have tried to put a skeleton underneath the clumpy images we see.”

The new work demonstrated that none of the previously identified structures in IRC+10216’s circumstellar environment were persistent and therefore could not be representative of the alignment or position of the star.

“In trying to find an underlying structure to the clumps and blobs, we have seen little more than our own preconceptions reflected back at us — like a giant celestial Rorschach Ink Blot Test,” Professor Tuthill said.

Whatever future study will reveal, it is perhaps the observation of this star that is the end in itself, Mr Stewart said: “The real excitement is the extreme physics — CW Leo is a swollen luminous giant poised at the most self-destructive phase of its existence.

“It is literally tearing itself apart under its own glare, hurling dense clouds of dust and gas out into the galaxy; dying amidst its own glorious final fireworks display.”