The “eye in the sky” has become a major part of research for segments of the scientific community. But how should it be trained?

Over the past two years, University of Virginia environmental scientist Scott Doney served on a National Academies of Sciences, Engineering and Medicine panel that on Friday released a report making recommendations for what satellite Earth observations should be made during the next decade by NASA, the National Oceanic and Atmospheric Administration and the United States Geological Survey.

Doney, a chaired professor, came to UVA last fall from Woods Hole Oceanographic Institution. His research spans oceanography, climate and biogeochemistry, with an emphasis on computer models, remote sensing and data analysis. He is interested in how the global carbon cycle and ocean ecology respond to natural and human-driven climate change signals, such as ocean warming, sea-ice loss and acidification of the ocean that results from the burning of fossil fuels.

He answers here a few questions about the National Academy report for UVA Today.

Q. What are some of the things we’ve learned about the Earth and atmosphere by observations from space?

A. Over the past several decades, satellite observations have opened up a whole new window on our changing planet. In part, this is because satellites provide an invaluable global perspective.

I’m an oceanographer, and we are often limited because research ships only move at about the speed of a bicycle. Satellite data, in contrast, allows us to map planet-wide patterns in storms, ocean currents, sea-ice and plankton. Space-based observations also have been used to quantify and understand the causes for the changing global water cycle: rising sea-levels, shifting droughts and floods, depleting groundwater and melting glaciers and ice sheets.

Q. What is the gist of the panel’s report?

A. Our task as a panel was to help NASA, NOAA and USGS shape science priorities and guide agency investments in satellite Earth observations into the next decade.

Working from input from the scientific community, public and expert panels, we came up with a set of about a dozen priorities for new observations that complement existing and planned satellite missions. The observations were chosen to address both pressing science questions, such as climate change, and the growing utility of satellite data in our daily lives. Key recommendations include new observations on clouds and precipitation; atmospheric aerosols or small particles that influence air quality and climate; planet-scale reorganizations of water between the ocean, snow and land-ice and groundwater; vegetation and algal biomass that fuel ecosystems; and deformations of the Earth surface associated with natural hazards like earthquakes and landslides.

Q. If implemented, in what ways would Earth observations be altered over the next decade from current methods?

A. In the past, scientists were often forced, by necessity, to concentrate on somewhat narrow aspects of the planet because of limited data. New satellite observations and modeling tools now allow us to take a more comprehensive perspective – for example, linking together measurements of rainfall and soil moisture to water supply, crop harvests and forest health. Studying the Earth as a dynamic system of intertwined parts is essential for answering the most challenging scientific questions.

Q. What more do you think we will learn in the coming decade?

A. Satellite data has become ubiquitous in the functioning of modern society, so commonplace that we don’t often appreciate how Earth observations contribute to our economy, national security, public safety and quality of life. An important task moving forward is to speed and ease the translation of satellite observations into new applications that support humanity’s ability to thrive.

Q. How did you get selected to serve on this panel?

A. The panel members were chosen by the national academies from nominations from the scientific community. The panel contained scientists and engineers with expertise spanning the Earth sciences and satellite technologies. 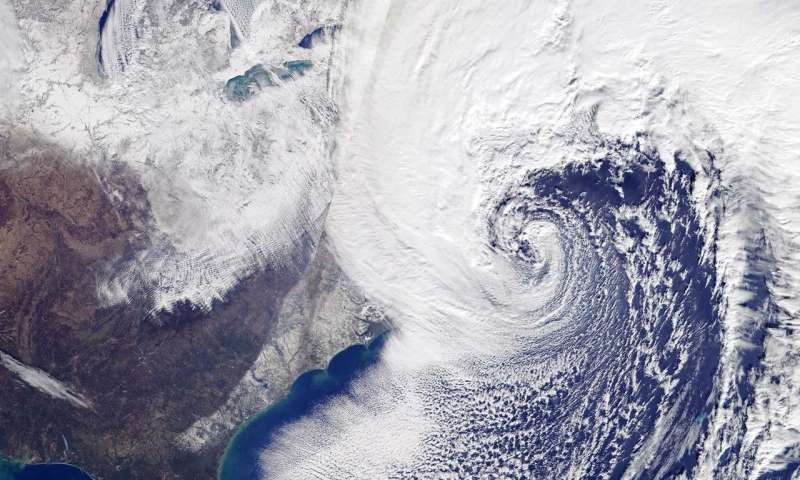 A fast-moving winter storm hit the eastern United States during the first week of 2018. Here’s the view from a NASA Earth observing satellite. (Image Credit: NASA)