Since the Space Race began in the mid-1950s, the United States, Russia, and other nations have gradually been polluting the space around Earth.

It all began in 1957, when the Soviet Union launched Sputnik 1, a 58.5-centimeter-wide satellite, with four external radio antennae to broadcast radio pulses. After launching the satellite into orbit, a piece of the rocket broke off, becoming the very first piece of space junk.

In fact, every mission since Sputnik 1 has created space junk, whether it be from unintended collisions, launch vehicle debris, or pieces of satellites falling apart. Today, the U.S. Space and Surveillance Network regularly tracks more than 23,000 space objects orbiting Earth, covering objects larger than about 5 to 10-centimeters in low Earth orbit and 30-centimeters to 1-meter at geostationary altitudes.

To help visualize the growing amount of trash currently orbiting the Earth, Dr. Stuart Grey, lecturer at University College London and part of the Space Geodesy and Navigation Laboratory, created the following video, which shows the growth of space debris from 1957 to 2015.

Using data on the precise location of each piece of junk, Dr. Grey has been tracking and recording the paths and collisions of the accumulating debris. With today’s annual launch of about 60 to 70 new satellites each year, and with future break-ups continuing to occur at average historic rates of four to five per year, the amount of space debris is likely to steadily increase. 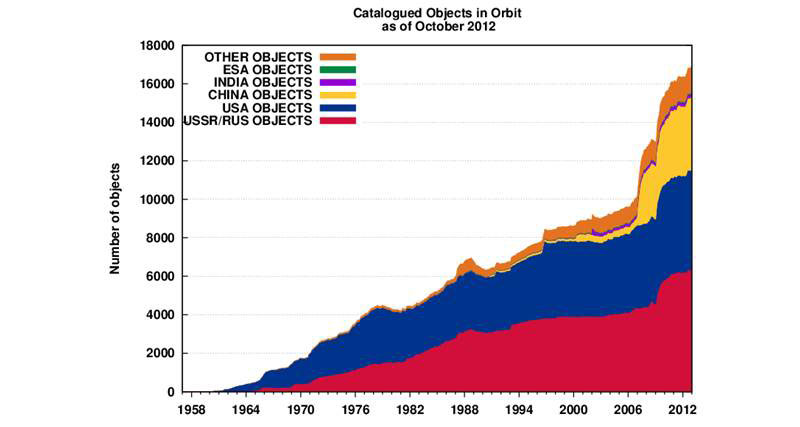 As space becomes more cluttered, it’s becoming more dangerous to send humans into orbit. Even the smallest piece of junk orbiting Earth at hypersonic velocities could do serious damage to a spacecraft.

To view an even more detailed visualization, visit www.rigb.org/docs/debris.