Far in the western hemisphere, scientists on NASA’s New Horizons mission have discovered what looks like a giant “bite mark” on Pluto’s surface. They suspect it may be caused by a process known as sublimation—the transition of a substance from a solid to a gas. The methane ice-rich surface on Pluto may be sublimating away into the atmosphere, exposing a layer of water-ice underneath. 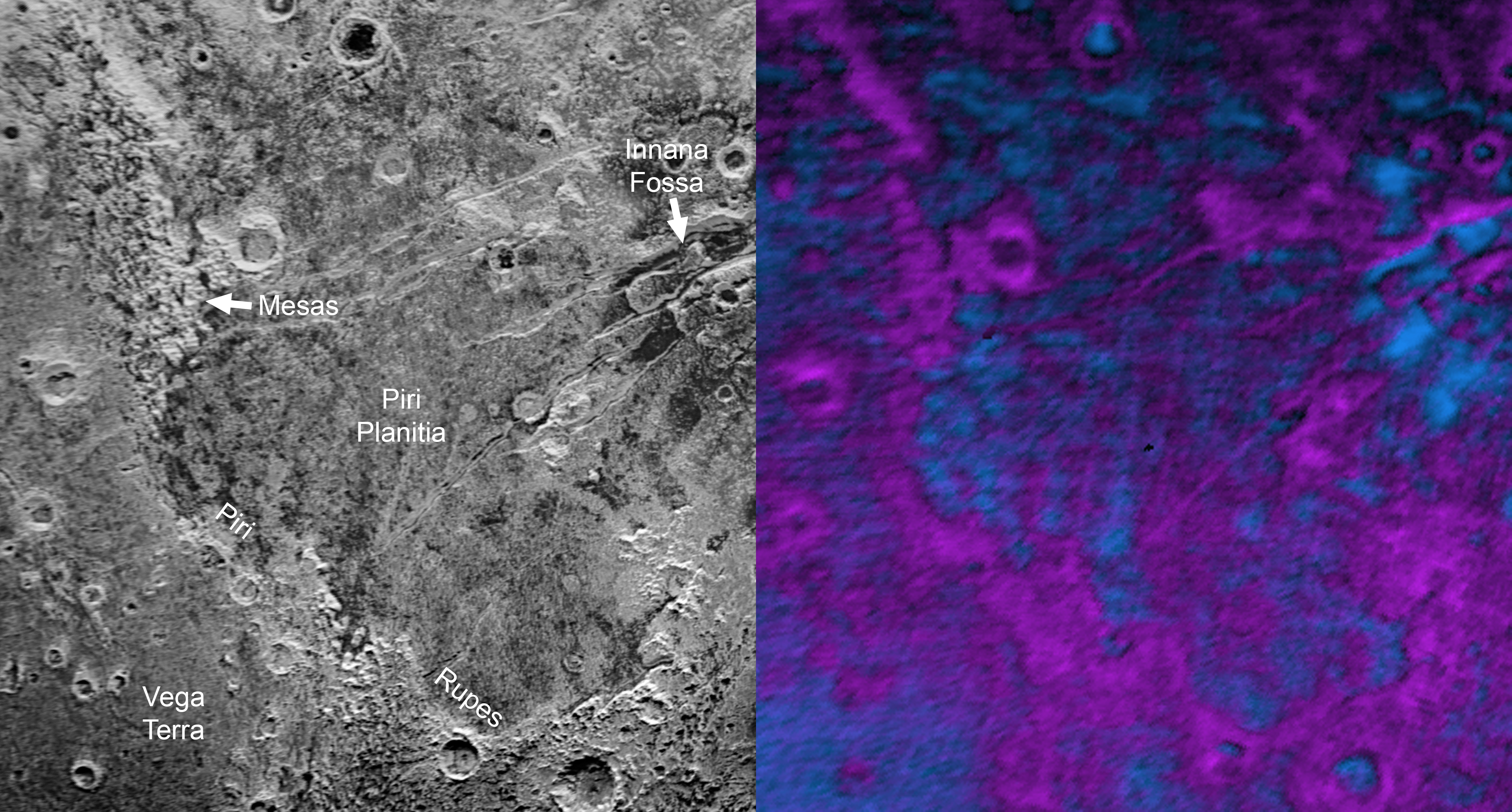 In this image, north is up. The southern portion of the left inset above shows the cratered plateau uplands informally named Vega Terra (note that all feature names are informal). A jagged scarp, or wall of cliffs, known as Piri Rupes borders the young, nearly crater-free plains of Piri Planitia. The cliffs break up into isolated mesas in several places.

Cutting diagonally across the mottled plans is the long extensional fault of Inanna Fossa, which stretches eastward 370 miles (600 kilometers) from here to the western edge of the great nitrogen ice plains of Sputnik Planum.

Compositional data from the New Horizons spacecraft’s Ralph/Linear Etalon Imaging Spectral Array (LEISA) instrument, shown in the right inset, indicate that the plateau uplands south of Piri Rupes are rich in methane ice (shown in false color as purple).  Scientists speculate that sublimation of methane may be causing the plateau material to erode along the face of the cliffs, causing them to retreat south and leave the plains of Piri Planitia in their wake.

Compositional data also show that the surface of Piri Planitia is more enriched in water ice (shown in false color as blue) than the higher plateaus, which may indicate that Piri Planitia’s surface is made of water ice bedrock, just beneath a layer of retreating methane ice.  Because the surface of Pluto is so cold, the water ice is rock-like and immobile. The light/dark mottled pattern of Piri Planitia in the left inset is reflected in the composition map, with the lighter areas corresponding to areas richer in methane – these may be remnants of methane that have not yet sublimated away entirely.

The LEISA data at right was gathered when the spacecraft was about 29,000 miles (47,000 kilometers) from Pluto; best resolution is 1.7 miles (2.7 kilometers) per pixel.