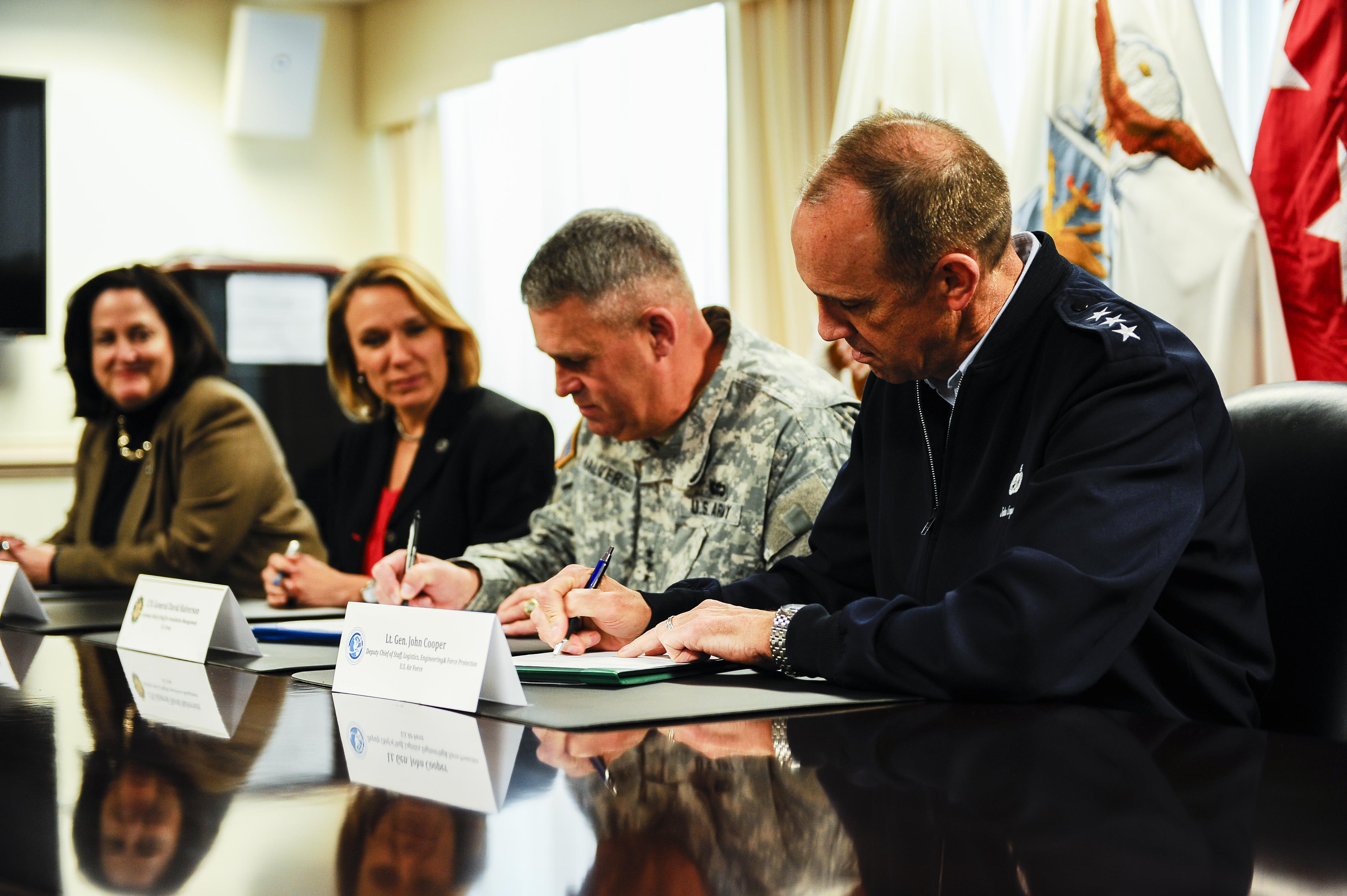 From front to back, Lt. Gen. John Cooper, the Air Force deputy chief of staff for logistics, engineering and force protection; Lt. Gen. David Halverson, the Army assistant chief of staff for installation management; Miranda Ballentine, the assistant secretary of the Air Force for installations, environment and energy; and Katherine Hammock, the assistant secretary of the Army for installations, energy and environment sign a memorandum of agreement that formalizes the partnership between the services’ energy offices at the Pentagon, Washington, D.C., April 6, 2016. (U.S. Air Force photo/Tech. Sgt. Bryan Franks)

The military’s ability to accomplish its missions — whether executing today’s fight or training for future ones — is dependent on electricity that powers installations. The Army and Air Force have identified energy resilience as a critical objective, advancing the capability for their systems, installations, and personnel to respond to and recover from unexpected disruptions.

The Air Force recently established its Office of Energy Assurance, which will develop an integrated facility energy portfolio. The Army’s Energy Initiatives Task Force was established in September 2011, and became an enduring organization, the Office of Energy Initiatives, in October 2014. The OEI serves as the central management office for implementing large-scale renewable and alternative energy projects, while leveraging private sector financing.

The services formalized this partnership April 6 during a ceremony at the Pentagon. The memorandum of agreement, signed by Katherine Hammack, the assistant secretary of the Army for installations, energy and environment; and Miranda Ballentine, the assistant secretary of the Air Force for installations, environment, and energy, shows the importance both services place on clean, reliable and affordable energy.

Hammack stressed this partnership was vital for the Defense Department and would continue to push the Army’s energy goals.

“The Departments of the Army and the Air Force share a common commitment to securing our installations with energy that is clean, reliable and affordable,” Hammack said. “I am pleased that through this agreement, we can share lessons learned and leverage the relationships we have developed with government, industry and utilities for the benefit of both our services.”

While the establishment of the Air Force OEA cemented the Air Force’s focus on energy resiliency and strategic energy agility, Ballentine said this partnership would advance that capability.

“This Army-Air Force partnership will accelerate our goal of providing mission assurance through energy assurance,” Ballentine said. “The Air Force, Army and Navy fight the fight together; we are one joint force, and our jointness is what makes us formidable around the world. Installation energy projects are another area where a joint-approach and strong collaboration can help us do more, faster.”

Lt. Gen. John Cooper, the Air Force deputy chief of staff for logistics, engineering and force protection, also signed the memo and said the Air Force is a globally networked force with critical missions and operations that are reliant on access to energy to accomplish the mission.

“We execute almost all our missions from our air bases, so building partnerships like this will ensure our resources and approaches are focused on mission assurance and resiliency,” he said.

Lt. Gen. David Halverson, the Army assistant chief of staff for installation management, also signed the memo on behalf of the Army.

“This agreement is a framework for collaboration between the Army and the Air Force on policies, procedures and partnerships that support our energy missions,” Halverson said. “We are excited to work with the Air Force in this effort. This partnership will identify and expand potential renewable energy opportunities across Army and Air Force installations.”

According to the memo, the partnership provides a framework for cooperation and support in the development of renewable energy projects, establishes the expectations and requirements of each service, and demonstrates both services’ focus on achieving energy assurance.