NASA’s Marshall Space Flight Center (MSFC), located in Huntsville, Alabama, has pioneered space exploration and rocket advancements since it was established in 1960. Serving as one of the space agency’s largest centers, MSFC was responsible for various components of crucial missions, such as developing the Saturn launch vehicles for the Apollo moon program and leading the development of Space Shuttle propulsion elements and its external tank.

Currently, Marshall is pursuing another potentially groundbreaking technology for spaceflight: additive manufacturing, otherwise known as 3D printing. The center’s exploration into 3D printing began in June 2011 when a team of MSFC engineers conducted the first hot fire test of a 3D printed part – a hot gas duct for the gas generator of the J-2X rocket engine.

“That was the first time we were able to test a 3D printed part in a hot fire environment,” explains Nick Case, Marshall’s engine analysis team lead. “You can do analysis, material testing, and an individual component test, but it’s very hard to replicate the true environment of a hot fire rocket engine test.”

After successfully testing the duct, the Marshall engineers moved on from the J-2X rocket engine to developing a smaller engine more compatible with the build box of available 3D printers. They designed a 35,000-pound liquid hydrogen and liquid oxygen upper stage engine. However, the engineers wanted to apply as much 3D printing to the project as possible to prove the technology could be a whole-system solution – not just for piece parts. 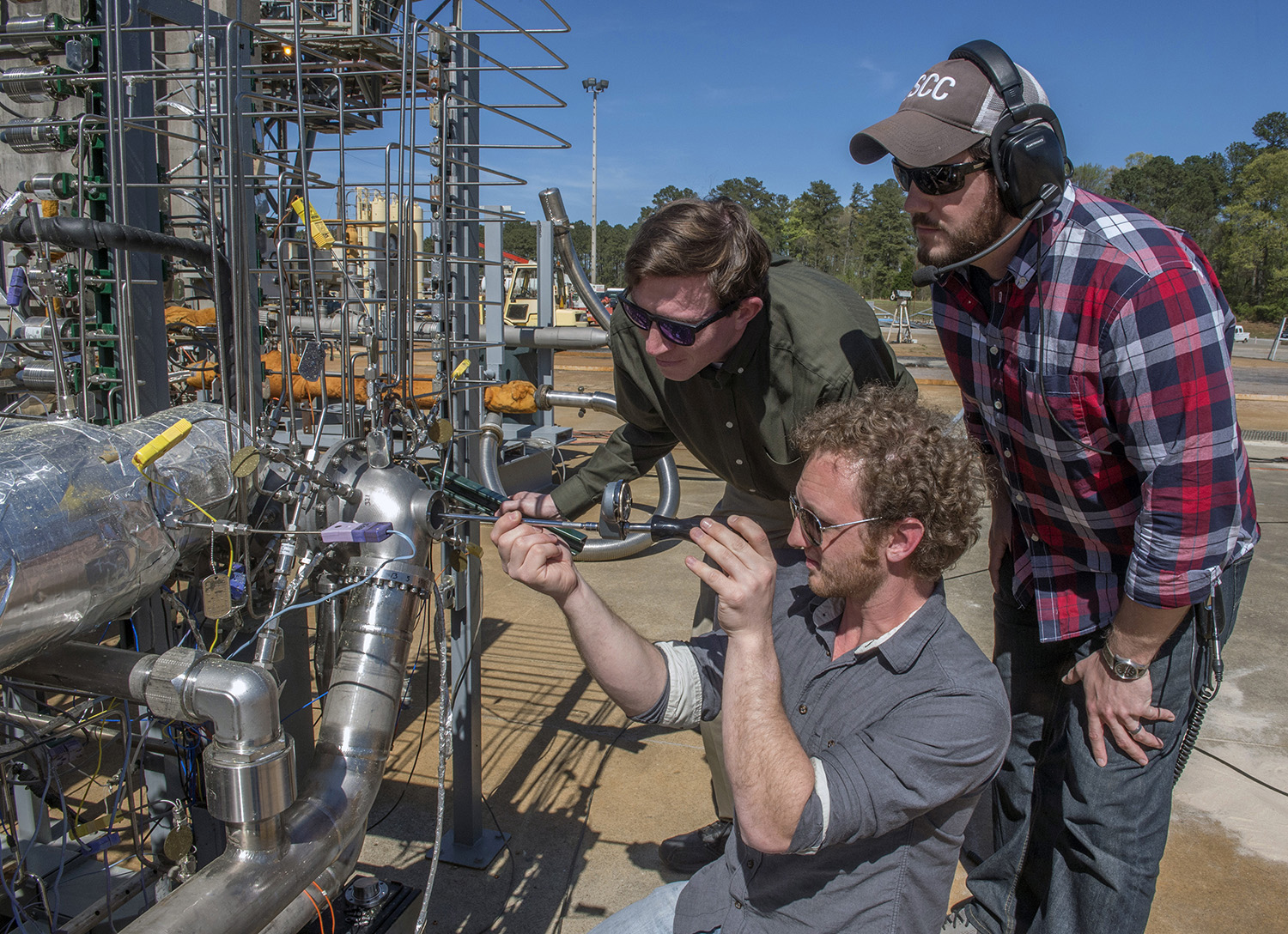 Since the second project began about three years ago, the team has designed, developed, and tested a 3D printed fuel turbopump that spins at 91,000 revolutions per minute (rpm), while producing 2,000 horsepower (hp). Additionally, they’ve designed, printed, and tested a main injector, control valves, speed lines, tubing, and piping.

“We’ve 3D printed and tested just about every piece of the rocket engine that we’ve designed,” says Case. “And we’ve been very successful in our approach.”

When Marshall first started 3D printing rocket engine parts, there were only a few vendors in the country that had the necessary equipment and know-how to produce quality components.

“In the early phases of our projects, we just sent parts out to multiple companies,” explains Case. “Some only had one printer, while others were more established and had multiple printers and engineering resources. We tried to use this shotgun approach to see which vendors could do certain things best.”

Since 2011, MSFC has developed a growing industry base that it can tap to build 3D printed rocket engine parts in the future. One such vendor, Stratasys Direct Manufacturing (SDM), used an additive manufacturing technology known as direct metal laser sintering (DMLS) to help build a rocket injector 15 times faster than traditional manufacturing.

The part was manufactured in about 300 hours using Inconel 625 in an EOS M280 machine with proprietary build parameters. SDM helped dramatically consolidate the traditionally manufactured 163-component part into a two-piece unit using 3D printing. This ability to create highly complex parts is what makes it so attractive to the aerospace industry.

Traditional manufacturing requires holes drilled into each element of the injector inlet. Then, a fitting is machined with unique flow features and welded to the first element. The process requires multiple pieces to be welded, machined, cast, and otherwise bonded together to build the injector.

Conversely, the DMLS-built injectors allowed the intricate, unique swirl pattern to be built directly into the inlet of the injector in one print. The 3D printed injectors successfully passed hot fire, static, and strenuous mechanical property tests – each of which are critical stages in the validation process.

Typically, Marshall uses powder bed metal fusion (e.g. DMLS, electron beam melting, and selective heat sintering) for all its 3D printing, but the center prints with direct powder injection too. The latter form of manufacturing injects metal powder into a laser beam as the part is fabricated.

“[Direct powder injection] allows you to manufacture typically larger parts,” says Case. “It’s more of a free form approach. We’ve done some of our larger feed lines on the engine that way, but just about all the other parts were done using powder bed metal fusion.”

Although 3D printing proves useful for complex parts, the space center wants to only apply the technology where it is most cost effective and practical.

MSFC has completed a variety of component and even system-level testing to validate the performance of its 3D printed rocket engine. In fact, late last year the NASA team hot fire tested a demonstrator breadboard engine comprised of 75 percent 3D printed parts.

Seven tests were performed with the longest lasting 10 seconds. Throughout the test, the 3D printed demonstrator engine experienced all the extreme environments inside a flight rocket engine where fuel burns at greater than 6,000 degrees Fahrenheit to create thrust. The turbopump delivers the fuel in the form of liquid hydrogen cooled to about -400 degrees Fahrenheit. 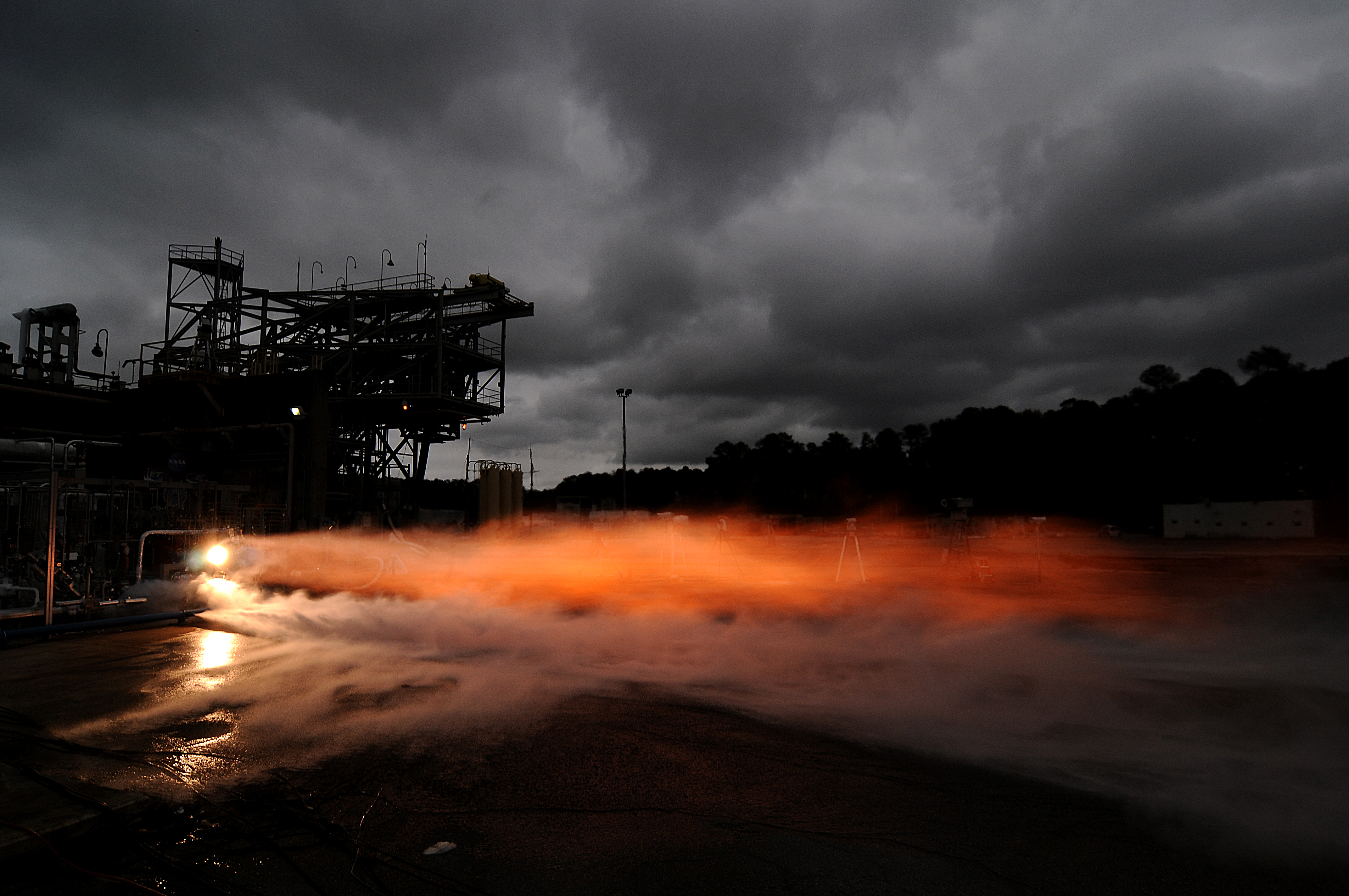 Each test used cryogenic liquid hydrogen and liquid oxygen, both of which are staples of spaceship propulsion systems. The combination of liquid hydrogen and oxygen creates not only an extremely hot environment, but it could also cause embrittlement to subpar parts.

According to Case, the NASA engineers were pleasantly surprised at the performance of the engine and its components compared to that of traditionally manufactured parts. Unfortunately, because only one prototype was created, a one-to-one comparison was not possible. The Marshall team has, however, hot fire tested 3D printed subscale injectors repetitively in the same condition.

“We get roughly the same performance within less than a percent difference,” remarks Case. “In essence, the performance has been really good.”

Because MSFC is part of a government agency, it can afford to take risks where companies can’t. Therefore, Marshall took a lot of risk early on in the research and development phase of 3D printing rocket engines to prove that it was a viable process.

“We’ve had a lot of technical interchange meetings where we’ve shared our data and approaches with companies,” says Case. “We’ve also provided insight to companies that are using 3D printing to develop their capabilities and products for rocket engines.”

For instance, Marshall isn’t just developing a hardware database, but it’s likewise performing a variety of materials tests to generate a database that can be applied to any future design. Even though NASA doesn’t have a timeline for when it will fly 3D printed parts, the agency is thrilled that several commercial companies are already planning to launch rocket engines with 3D printed parts in the near future.

“We’re doing everything we can to help support that – whether it’s by doing material testing or by testing our rocket engine prototype,” says Case. “We want to push all that information out to the community.”

One day, the agency itself hopes to use its 3D printing technology in rocket engines to thrust humans into space, but it is currently wrestling with how to verify and certify additively manufactured parts for flight.

Future plans for the technology also include performing engine tests with liquid oxygen and methane, which are key propellants for Martian landers. If the engine tests are successful, the technology could influence spacecraft built for leaving Earth or for visiting other planets.

“Our experts here at Marshall have actually been working on 3D printing for 20 years now; it’s not just something that’s bubbled up overnight,” notes Case. “But the performance of being able to print metal parts has really increased dramatically in the past five years, which is allowing us to do all this cool stuff with 3D printing metal parts. That’s the future; that’s what I’m excited about; and that’s what NASA is excited about.”

This article originally appeared in the July/August 2016 print issue of Product Design & Development.