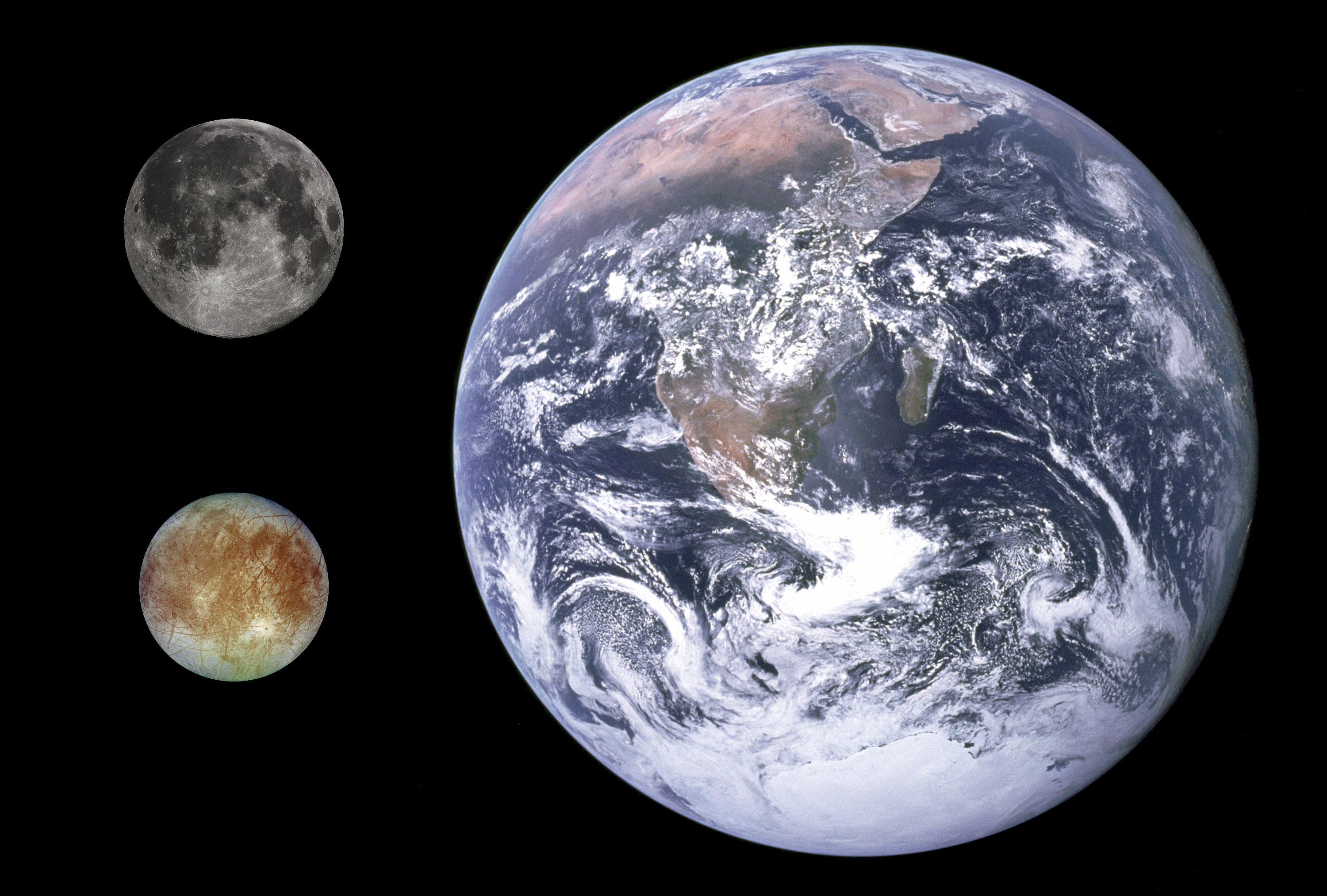 A representation the sizes of Jupiter’s moon Europa (bottom left), Earth, and Earth’s moon (top left). New research finds the ocean of Europa could have the necessary balance of chemical energy for life. Credit: NASA/JPL.

The ocean of Jupiter’s moon Europa could have the necessary balance of chemical energy for life, even if the moon lacks volcanic hydrothermal activity, finds a new study.

Europa is strongly believed to hide a deep ocean of salty liquid water beneath its icy shell. Whether the Jovian moon has the raw materials and chemical energy in the right proportions to support biology is a topic of intense scientific interest. The answer may hinge on whether Europa has environments where chemicals are matched in the right proportions to power biological processes. Life on Earth exploits such niches.

In the new study published in Geophysical Research Letters, a journal of the American Geophysical Union, scientists at NASA’s Jet Propulsion Laboratory (JPL), Pasadena, California, compared Europa’s potential for producing hydrogen and oxygen with that of Earth, through processes that do not directly involve volcanism. The balance of these two elements is a key indicator of the energy available for life. The study found that the amounts would be comparable in scale; on both worlds, oxygen production is about 10 times higher than hydrogen production.

The work draws attention to the ways that Europa’s rocky interior may be much more complex and possibly Earthlike than people typically think, according to Steve Vance, a planetary scientist at JPL and lead author of the new study. “We’re studying an alien ocean using methods developed to understand the movement of energy and nutrients in Earth’s own systems. The cycling of oxygen and hydrogen in Europa’s ocean will be a major driver for Europa’s ocean chemistry and any life there, just it is on Earth.”

Ultimately, Vance and colleagues want to also understand the cycling of life’s other major elements in the ocean: carbon, nitrogen, phosphorus and sulfur.

As part of their study, the researchers calculated how much hydrogen could potentially be produced in Europa’s ocean as seawater reacts with rock in a process called serpentinization. In this process, water percolates into spaces between mineral grains and reacts with the rock to form new minerals, releasing hydrogen in the process. The researchers considered how cracks in Europa’s seafloor likely open up over time, as the moon’s rocky interior continues to cool following its formation billions of years ago. New cracks expose fresh rock to seawater, where more hydrogen-producing reactions can take place.

In Earth’s oceanic crust, such fractures are believed to penetrate to a depth of 5 to 6 kilometers (3 to 4 miles). On present-day Europa, the researchers expect water could reach as deep as 25 kilometers (15 miles) into the rocky interior, driving these key chemical reactions throughout a deeper fraction of Europa’s seafloor.

The other half of Europa’s chemical-energy-for-life equation would be provided by oxidants — oxygen and other compounds that could react with the hydrogen — being cycled into the Europan ocean from the icy surface above. Europa is bathed in radiation from Jupiter, which splits apart water ice molecules to create these materials. Scientists have inferred that Europa’s surface is being cycled back into its interior, which could carry oxidants into the ocean.

“The oxidants from the ice are like the positive terminal of a battery, and the chemicals from the seafloor, called reductants, are like the negative terminal,” said Kevin Hand, a planetary scientist at JPL and co-author of the study. “Whether or not life and biological processes complete the circuit is part of what motivates our exploration of Europa.”

Europa’s rocky, neighboring Jovian moon, Io, is the most volcanically active body in the solar system, due to heat produced by the stretching and squeezing effects of Jupiter’s gravity as it orbits the planet. Scientists have long considered it possible that Europa might also have volcanic activity, as well as hydrothermal vents, where mineral-laden hot water would emerge from the sea floor.

According to Vance, researchers previously speculated that volcanism is paramount for creating a habitable environment in Europa’s ocean. If such activity is not occurring in its rocky interior, the thinking goes, the large flux of oxidants from the surface would make the ocean too acidic, and toxic, for life. “But actually, if the rock is cold, it’s easier to fracture,” he said. “This allows for a huge amount of hydrogen to be produced by serpentinization that would balance the oxidants in a ratio comparable to that in Earth’s oceans.”

NASA is currently formulating a mission to explore Europa and investigate the moon’s potential habitability. The mission would send a highly capable, radiation-tolerant spacecraft into a long, looping orbit around Jupiter to perform repeated close flybys of Europa. During these flybys, the mission would take high-resolution images; determine the composition of the icy moon’s surface and faint atmosphere; and investigate its ice shell, ocean and interior.