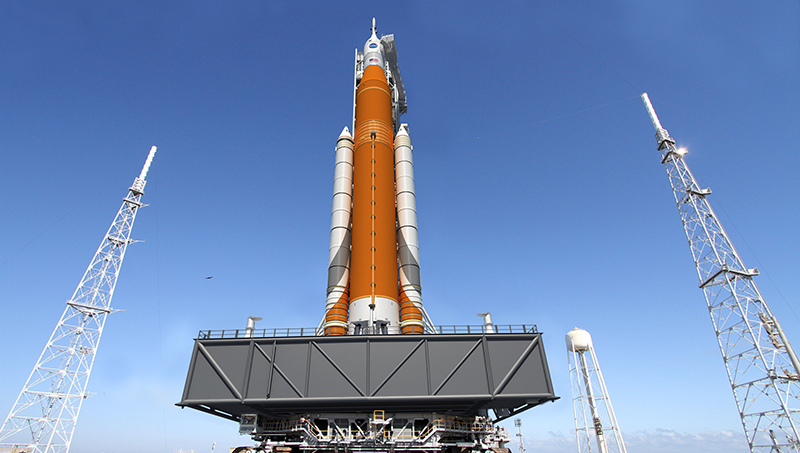 An artist illustration of NASA’s Space Launch System rocket and Orion spacecraft on the mobile launcher at Launch Pad 39B at NASA’s Kennedy Space Center in Florida. Image credit: NASA

NASA’s Ground Systems Development and Operations Program (GSDO) has successfully completed its critical design review, on the path to preparing for the agency’s journey to Mars.

Members of the review board completed their in-depth assessment of the plans for the facilities and ground support systems at Kennedy Space Center in Florida that will be needed to process NASA’s Space Launch System (SLS) rocket and Orion spacecraft for deep-space exploration missions.

A Standing Review Board composed of aerospace experts from NASA and industry also will provide an independent assessment. Results of the review process will be briefed to senior agency officials in the coming months as the last step in the process.

“The completion of this review represents a critical milestone for the GSDO team that clearly demonstrates we are on track with the launch site upgrades required to support SLS and Orion test, checkout and launch in 2018,” said Mike Bolger, GSDO program manager.

The SLS will be the most powerful rocket in the world and will launch astronauts in the agency’s Orion spacecraft to destinations beyond Earth’s orbit. Key elements of Kennedy’s launch infrastructure will support a new era of human exploration on the journey to Mars.

High Bay 3 of the Vehicle Assembly Building will house the SLS on the mobile launcher before it is rolled out to the launch pad atop the massive crawler-transporter.

Engineers will fuel the Orion spacecraft in the Multi-Payload Processing Facility with propellants that astronauts will need to carry out their missions in space.

The launch director will prepare for the final countdown with the command and control system in the Launch Control Center firing room before SLS blasts off from Launch Pad 39B on its mission to explore deep space.

Kennedy’s Engineering Directorate is responsible for leading the ground system designs. The review of GSDO’s designs will ensure that Kennedy’s launch infrastructure will meet the requirements of the SLS and Orion spacecraft when the flight hardware arrives for processing, launch and post-flight recovery of Orion.

“The GSDO critical design review is a key milestone in the engineering design and development process and represents major progress in enabling human exploration hardware to be integrated, processed and launched from Kennedy Space Center,” said Pat Simpkins, director of Engineering.

Progress already can be seen around the center with work currently underway to prepare for the arrival of SLS and Orion. Several new work platforms have arrived for the VAB, mobile launcher ground system equipment installation is in progress, re-bricking of the flame trench is underway at Pad 39B, and the Orion Service Module Umbilical, which will attach from the mobile launcher tower to the Orion spacecraft, is being tested at the Launch Equipment Test Facility.

“As I drive around the center, I can see the transformation taking place every day right before my eyes,” said Shawn Quinn, Exploration Systems manager. “The work completed by the Kennedy and GSDO team is remarkable and is a reflection of our ‘can do’ spirit.”

This milestone is the final review before moving into fabrication, installation and testing of Kennedy’s ground systems.

“I’m really proud of the GSDO team,” Bolger said. “We are transforming Kennedy into a multi-user spaceport, and we are preparing for NASA’s journey to Mars. The SLS launch will come up fast, and we’re going to be ready when the flight hardware begins to arrive.”